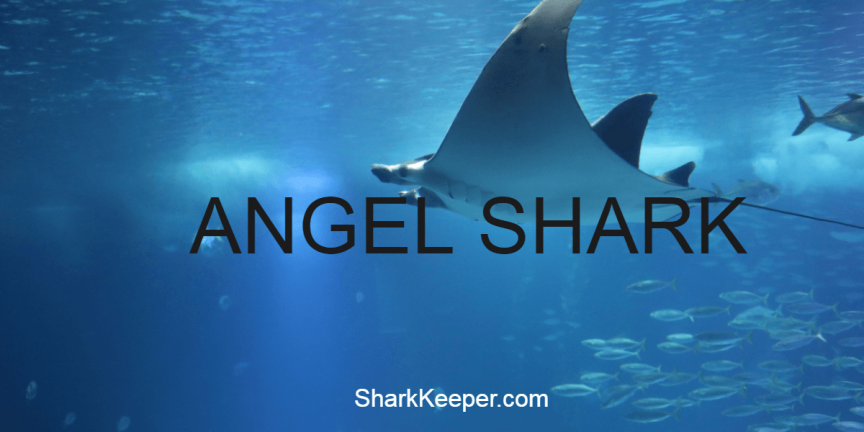 Angel sharks include a group of shark species in the genus Squatina. There are 24 identified species under this genus. And, their distribution occurs all over the world both in temperate and tropical regions. Certainly, they are interesting sharks to learn about.

The family of these shark species is Squatinidae. Their common habitat is a sandy seabed and they are found at depths close to 150m.

Before now, the Angel sharks are abundant over large areas. However, recently there is an increase in fishing pressure resulting in a significant population decline of these sharks. As a result of this, the IUCN (International Union for Conservation of Nature) listed most of these shark species as Critically Endangered.

This page contains amazing facts about the Angel sharks that will excite any shark enthusiast. But, before listing these facts, let us introduce this shark.

The Angel sharks very much resemble the rays as they have unusual flattened bodies and broad pectoral fins. However, their genus Squatina is the only one in the family Squatinidae and order Squatiniformes.

Most species of Angel sharks live in shallow tropical or temperate seas. And, the other few remaining species live in the deeper water of about 1300m (4300 ft.) in depth.

The majority species occur in a small restricted geographic range, Although, some still occur over a wider geographic area. This restriction might as well relate to the Squatina species behavior as they are ambush predators. And concurrently, they are bottom-dwellers to complete the picture.

With such characteristics, trans-ocean migration is an unlikely activity in these species. Though, there are reports of a large-scale coastal pattern of migration in Squatina squatina species as an example.

The 24 Identified Species of Angel Sharks

Here are the species of Angel shark:

The Appearance of Angel Sharks

These species of Ocean sharks have a posterior part with muscular appearance typical of most other sharks. However, the anterior part is broad and flattened.

The pectoral fins and pelvic fins are large and horizontally supported. There is the upper and lower lobe of the caudal fin. Whereby, the upper lobe is shorter in length than the lower lobe.

The jaws of the Angel sharks are extensible and can snap upwards rapidly as a gesture to capture their prey. More so, they possess long teeth that are in the likeness of needles.

Most of the Angel shark species grow to a maximum length of 5ft (1.5 m). Although, the Japanese angel shark (Squatina japonica) notably grows up to 6.5ft (2 m).

Other forms of deformities include missing fins, deformed snout, additional fins and more. In all, it is only but a few sharks that have been found to have these abnormalities.

The known causes of these deformities include genetic factors, dietary imbalance, parasites, traumatic injuries, or stress in the examined specimen.

The skeletal deformities do not significantly affect the hunting capacity of the Angel shark specifically Squatina squatina. Certainly, this is because this species is an active ambush predator that buries itself lying in wait of its prey.

Of recent, there are speculations resulting from research that humans contribute more to the physical injuries of these shark species. Of course, constant human activities in coastal areas where most of these sharks’ species habit can lead to their injury.

What Would a Habitat of Angel Sharks Look Like?

Angel sharks are Ocean sharks. Thus, they inhabit the tropical and temperate marine environments. And, they would usually stay in shallow waters at depths between 10 to 492ft (3 to 150 m) off coasts.

During the day, these sharks will tend to bury themselves in sandy or muddy substrates. As such, they will remain like that in camouflage waiting for prey that might cross their path.

However, at night they move to the seafloor in more active behavior. And, they will roam the bottom of the sea in search of food.

The preys for Angel sharks include smaller fish, cephalopods, and crustaceans.

The Angel sharks are bottom-dwellers that are not mostly active. As such, they tend to be peaceful and would not attack anyone except for their prey. Or, in the event, they feel provoked by anyone touching their head or tail.

They possess sharp teeth and strong jaws. Thus, they inflict painful deep cut through their bite. Certainly, there are records of attacks from these sharks. These attacks are mostly due to accidental stepping upon newborn Angel sharks buried in substrates. More so, for divers trying to grab them, they will always try to attack.

The breathing process of Angel sharks is quite different from most other bottom-dwelling fish. And, while others would pump out water through their oropharyngeal cavity during respiration, Angel sharks will rather use gill flaps which are under their body to pump out water.

This breathing process will make them not draw much attention. Thus, completing their camouflage as they lay an ambush for their prey.

Angel sharks from the beginning came as a byproduct of a commercial fishing process using gillnets. It had no commercial value and only used for crab bait. Thus, the aquatic community refers to it as “monkfish”.

However, a fish processor Michael Wagner in 1977 with the cooperation of commercial fishermen in Santa Barbara, California developed the market for Angel sharks.

This increased heavily the yearly take of Angel sharks in Central California leading to the decline in the population of these sharks species. Consequently, the use of gillnet for fishing in the nearshore waters of California State was prohibited. This was in an attempt to regulate the fishing of Angel sharks in the State. Further, there was a fishing restriction in more areas where the Pacific Angel shark (Squatina californica) occur.

The decline in the Angel sharks population and government intervention did not end in California. As a result, the UK government obtained full Angel shark protection under the Wildlife and Countryside Act. Above all, the very much abundant Angel shark in the Atlantic Ocean Squatina squatina became listed as Critically Endangered (in 2010) by the IUCN.

Listed here are interesting Facts about Angel Sharks that you would be glad to learn about.

Angel sharks are really amazing Ocean sharks with interesting features. Their differences from other sharks make them standout species that anyone would want to learn about.

This page covered all the interesting facts you need to know about Angel sharks. As such, you already know the conservation efforts put in place to preserve the existence of these species. As such, preserving sharks’ biodiversity.

In all, the species of Angel spread around the world. And, every one of these species needs adequate protection. Thus, all hands need to be on deck.