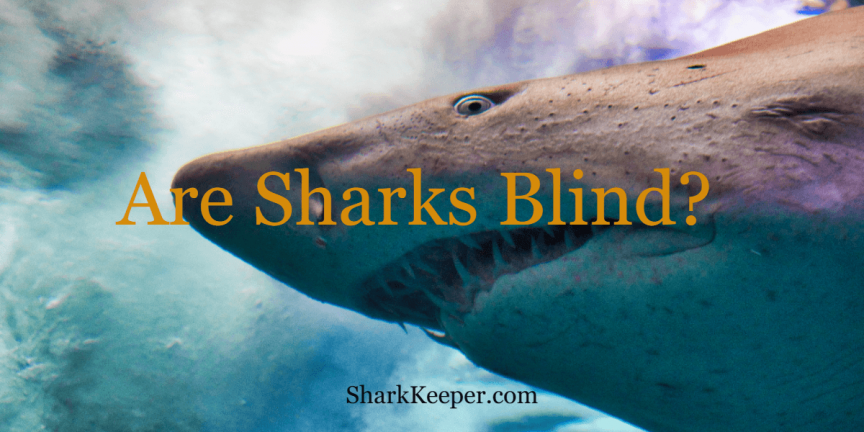 Sharks are not blind, even though many people thought they were, or that they had very poor eyesight. However, this is not the case at all. Sharks are color blind, but they can still see quite well.

In this article, we will take a look at what colors sharks are least attracted to, if whale sharks are blind, what the best color to wear is if you want to avoid shark attacks, and more!

Sharks are not blind, in fact, their vision is a lot better than we originally thought. Sharks are color blind, which means they cannot see a lot of colors clearly, but this does not stop them from hunting their prey as they have many tricks up their sleeves.

Are All Sharks Blind?

Crucially, the ability to see clearly when there are different levels of light means the shark can hunt during the day and during the night.

It’s thought that sharks are color blind because they are unable to see the color red. Shark’s eyes contain a single cone (ours contain 3 cones), which means they are unlikely to be able to see red. However, this does not mean that they see in just black and white. They can see a range of colors.

Sharks seem to have a real preference for the color yellow. Or at least a few species of shark seem to prefer this color to any others in the spectrum.

This was a real concern to the US Navy at one time as they wanted to give their sailors yellow life vests. A life vest that’s yellow is much easier to see in the water. Unfortunately, many sharks love yellow so that posed a bit of a problem!

What Colors are Sharks Least Attracted to?

Interestingly, it’s thought that there is no single color that a shark is least attracted to. Nonetheless, you should be careful about what you wear in the water. Firstly, sharks are more attracted to bright colors (especially yellow), so it makes sense to swap your bright green bathing suit for a darker shade.

Secondly, you should avoid wearing any jewelry or anything that shimmers when you’re in the water as the sparkle or shimmer it creates could attract a shark. If you want to go in the water, make sure you remove all of your jewelry. Without a doubt, if you cannot remove your jewelry you should cover it up before you get in the water.

Lastly, you might want to opt for a bathing suit or a wet suit that has a contrasting pattern. Crucially, this is because it’s thought the contrasting colors might confuse sharks.

Surprisingly, sharks might think that your bathing suit that has stripes or patterns might actually make you look less tasty to them. Secondly, there’s a theory that sharks might see the patterns as a warning to say away. Furthermore, this could be because you look like something that’s dangerous or poisonous.

As we have already seen, many sharks are attracted to the color yellow. It should be noted, however, that sharks seem to be more attracted to bright colors.

It’s likely that sharks will be more attracted to brightly colored wet suits. However, if you were to wear a dark colored wet suit while you were surfing, there’s a chance that you could be attacked by a shark from below. It should be noted that your silhouette could attract the shark.

Importantly, if you are surfing, you should consider adding a few stickers to the bottom of your surfboard. Without a doubt, stickers that contain striped patterns could help to prevent an attack. Lastly, this could be because the surfboard could look like something that’s dangerous or poisonous.

Firstly, whale sharks are not blind, however, their eyes do contain two blind spots. These blind spots are located behind their head and in front of their snout.

Additionally, whale sharks can only see approximately 15 meters (about 50 feet) in front of them. This means they don’t have great eyesight but they’re certainly not blind.

Furthermore, when they’re hunting prey, whale sharks only rely on their vision to help them when their prey is right in front of them. What this means is while they’re not blind, if you happen to be the whale shark’s prey, you’ll need to stay at least 15 meters away.

Are Sharks Blind When They Attack?

Yes and no. Great white sharks do not have eyelids, however, they can roll their eyeballs backward when they are attacking their prey. Importantly, this helps to prevent their eyes from being injured during the attack.

Furthermore, great white sharks really need to roll their eyeballs backward when they are hunting sea lions. This is because sea lions have very shark claws.

Lastly, when they are in full attack mode, great white sharks are almost completely blind. Nevertheless, when they are not attacking their prey, they have very good eyesight.

Can Sharks See in Front of Them?

Importantly, this ability to change their eyesight allows the shark to increase or decrease the quality of what they’re seeing while they’re hunting.

Impressively, sharks can see almost 360 degrees. This is because their eyes are on opposite sides of their heads.

Do Sharks Have Eyelids?

Sharks do have eyelids, but they can work slightly different from the way our eyelids work. This is because they are made from a clear membrane. Incredibly, this clear membrane helps to protect the shark’s eyes. Secondly, the membrane comes in useful when the shark is hunting its prey.

The prey might start to attack the shark. Even though a shark relies on other senses, it still needs to protect its eyes. Nonetheless, not all sharks have an eyelid. We have already seen that great white sharks don’t have this useful membrane. However, they do roll their eyes back when they’re attacking their prey.

How Can Sharks See in Water That Isn’t Clear?

Impressively, a shark’s eyes allow them to see in water that is not clear. Firstly, this is because they contain a later of mirrored crystals. These crystals can be found behind a shark’s retina.

Secondly, the crystals allow light to be picked up for a second time. This ensures that the light is diffused and sensitivity to the light is increased. Lastly, Sharks are able to see even when the light is low, and up to ten times better than we humans can.