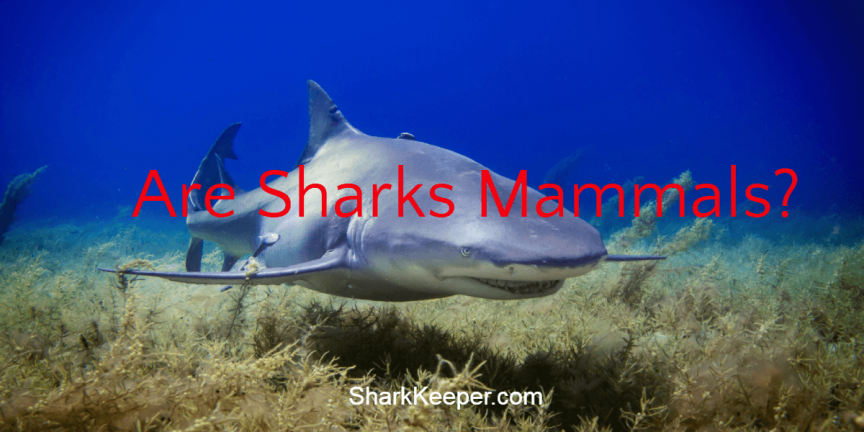 This article discusses whether sharks lay eggs. If great white sharks are mammals, and which sharks give birth and if a shark is an amphibian.

As sharks do not feed their young from mammary glands, they are not mammals. This is irrespective of how their young are born.

Coming up in this article we will talk about whether hammerhead sharks are mammals, if a shark is an amphibian, and more!

Why are Sharks Not Mammals?

Importantly, some sharks give birth in the same way as mammals, the only reason they are not considered to be like us humans or dolphins is because of the way they feed their young.

Some sharks give birth whereas others lay eggs. Confusingly, sharks can give birth or lay eggs depending on their species. Furthermore, some sharks carry eggs and give birth!

Do Sharks Give Birth or Lay Eggs?

Firstly, there are many different types of sharks. In fact, there are thought to be more than 500 species of sharks around the world. Nevertheless, not all of the species of sharks behave in the same way when it comes to their offspring. This is because some sharks lay eggs whereas others give birth.

When the eggs are laid, they are found in a protective case that is known as a “Mermaid’s purse”. The egg case has the ability to attach itself to seaweed, corals, or even the ocean floor. Horn sharks push their egg cases in between rocks or into crevices.

Mermaid’s purses are often found washed up on a beach. Incredibly, they look very similar to a purse and might often be mistaken for one.

Some species of sharks are Ovoviviparous. What this means is that the shark does not lay the eggs until they have fully absorbed the yolk sac, and the sharks have hatched. In cases such as this, the female shark will give birth to their young.

Which Sharks Give Live Birth?

Firstly, some of the largest sharks give birth to live young. In particular, those who give birth this way include:

Secondly, the sharks who give birth this way let their young fend for themselves. Surprisingly, this happens from the moment they are born.

No, as we have already seen, sharks are not mammals, they are actually fish. While they do give birth as mammals do, they don’t feed their young milk from mammary glands. This means they are not mammals, whales, however, are.

Great white sharks are very well-known for being the main predator of marine mammals. In addition to this, they are also known for biting humans more than any other shark does.

No, they are, in fact, carnivorous fish that hunt large fish and some smaller Hammerhead sharks. Interestingly, do give birth to live young, which is why they are often considered to be mammals. However, this is not the case at all.

Hammerhead sharks do not feed their young via mammary glands.

Firstly, Tiger sharks are the only species of shark in its family that lays eggs and gives birth to them. This is because when the shark is in their mother’s womb, they receive oxygen and nutrients from the umbilical cord.

Secondly, the shark does not lay the eggs until they have fully absorbed the yolk sac, and the sharks have hatched.

Without a doubt, this is a huge similarity to the way female humans give birth. However, the baby sharks stay in their mother’s womb for just a few months, unlike human babies.

Yes, sharks are members of the fish family. Incredibly, sharks are known as “Elasmobranch fish”. What this means is they have a skeleton that’s made up of a lot of cartilage. Secondly, they have between 5 and 7 gill slits that are located on the side of their heads. Thirdly, they have pectoral fins that aren’t fused to the head.

Known as “Sea dogs” up until the 1500s, the word “Shark” might come from the Dutch word “Schurk” which means scoundrel or villain. In addition to this, sharks are thought to have been on Earth for around 455 million years.

These incredible fish are thought to have ruled the seas for all this time. What this means is they were around before dinosaurs roamed the earth.

Is a Shark an Amphibian?

A shark is not an amphibian, in fact, it is a fish. There are indeed some similarities between amphibians and sharks but this does not make these “Sea dogs” amphibians.