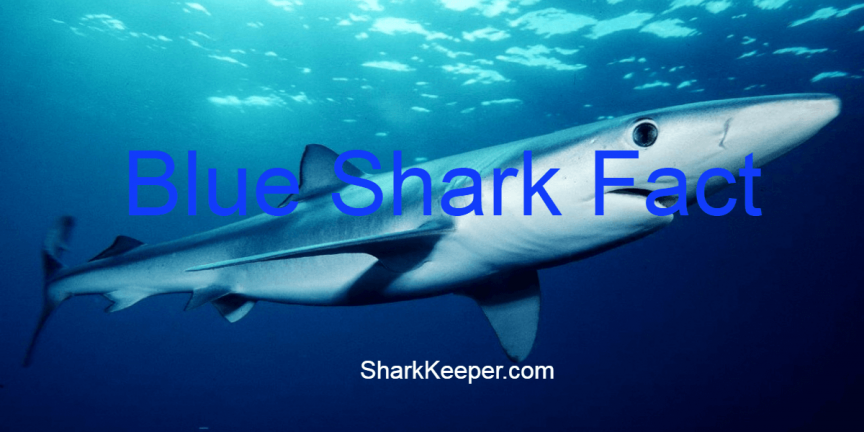 The Blue Shark (Prionace glauca) is a species of shark in the family Carcharhinidae and order Carcharhiniformes generally considered as requiem sharks.

This shark species have interesting facts and features. However, they are inhabitants of deep cooler ocean waters in the tropical and temperate regions of the world. As such, it is quite unlikely to just see one. But, if you are a shark enthusiast or intending to dive the Oceans, it would be a nice idea to learn the features of this shark. At least, to know what to expect in case you meet one.

One interesting Blue shark facts are that they have low records of human attacks. But then, some of these attacks involve fatal bites from the shark. So, be watchful and never consider this shark species to be absolutely harmless in any way.

The Blue shark got its common name from one of its identifying features which is the deep blue color at the top side of its body and the lighter shades by the sides. Though, the underside of this shark is white in color.

This species of ocean shark has a specially designed body with a tapered, sleek body. The main reason behind this design is to aid the shark’s agility and ease movements while swimming.

More so, this shark has small and overlapping dermal denticles (scales). Therefore, the skin of this fish is smooth when touched. The teeth in the upper part of the shark’s mouth have a triangular shape, serrated and recurved. They tend to overlap each other in the jaw. This makes the set of teeth very distinctive when compared to other sharks.

The Blue sharks have tail fin which moves side to side as it swims, thus making it a very fast and energetic swimmer. Consequently, this shark can effortlessly pursue its prey to a longer distance.

Commonly, Blue sharks will grow to a length of about 12 feet (3.8 meters). However, there are occasional reports of this shark growing to an unusually large size with a claim widely spread of a length of 20 feet (6.1 meters). But, there is no scientific backup for this claim.

Blue sharks prefer to live in deep cooler temperate and tropical ocean waters around the world. As such, this species of shark is epipelagic. They inhabit deeper waters seeking comfortable water temperatures ranging from 45 to 77F (7 to 25 C).

This shark species will swim deeper when in tropical waters. They can go as deep as 350 meters below the surface of the water. However, in temperate regions, the Blue shark may at times swim offshore in very rare settings where people in a boat may observe it.

The Blue shark travels long distances. Such migration as moving from New England to South America. Their distribution goes as far north as Norway and as far south as Chile. And, they migrate in a clockwise direction, tending to follow ocean currents while they seek cooler water.

One amazing Blue shark’s fact you should know about their habitat is that they have no set area they habitually return to. As a result, they will swim across far distances in search of food or mating partners with no intention of returning. And, because they swim very fast, they can cover longer distances in a shorter amount of time.

Another Blue shark fact here is that they habit off the coast of every continent except for Antarctica.

With the abundance of this shark species, its natural existence is under threat resulting from human activities. Thus, humans pose the known natural enemy of Blue sharks. As such, they hunt this shark for various purposes including commercial and game uses.

Of course, the skin of Blue sharks is edible. Hence, people eat it fresh, smoked, dried, and in salted form converted to fishmeal. Although, this shark is not widely sought for the meat. After all, there is a report of the Blue shark’s flesh containing a high concentration of heavy metals which includes lead and mercury.

The skin of the Blue shark is a raw material for making leather. Also, the fins come handy for making shark-fin soup. And, the liver used for oil. Even more, the jaw and teeth of this shark species are sometimes collected as well for commercial uses.

All these results in the massive killing of Blue sharks by humans with an estimated number of about 10 – 20 million Blue sharks killed each year. Of course, this calls for concern.

On the side of the shark, Blue sharks generally do not act aggressively toward humans. There are only a few records of this shark species attacking humans where some are very fatal. Certainly, your guess is right, the attacks occurred as a result of human interference mostly in an attempt to capture the shark.

The IUCN – International Union for the Conservation of Nature listed Prionace glauca (Blue shark) as “Near Threatened (NT)”.

Where the major threat is fishing for human uses. And, in response to this threat, laws are being put in place to secure the existence of this shark species from overfishing.

Blue sharks are not picky eaters and due to their very fast swimming nature, they tend to feed all the time to the point of regurgitating. This shark species is carnivorous, thus, they live on prey and hunt various open-water dwelling fishes as food.

As a result, their prey consists majorly of squids which is important for the Blue sharks. Other dietary components of this shark species include invertebrates such as octopus and cuttlefish. They also feed on crabs, shrimps, lobster, wide range of bony fishes, small sharks, and even seabirds.

Their rows of triangular teeth, serrated and facing inward helps this shark to grasp slippery food which may try to escape. Also, their gill rakers specially modified help them to seize such foods.

Blue sharks will travel great distances to feed. And, their swimming speed helps them catch up with their prey quickly. Also, they can dive quite deep to capture prey.

An interesting Blue shark feeding fact is that they tend to feed enthusiastically, making them seem as insatiable feeders at times.

While in their juvenile stage, Blue sharks are prone to attacks by larger sharks. As such, they may serve as prey to the great white shark (Carcharadon carcharias) and tiger shark which are their major predators. others reported to also hunt Blue sharks are the killer whales (Orcinus orca) and northern elephant seals. These larger fishes feed on blue sharks.

On the other hand, Blue sharks serve as a host to several parasite species. For instance, this shark definitively hosts the tetraphyllidean tapeworm, Pelichnibothrium speciosum (Prionacestus bipartitus). The blue shark readily gets infected with this parasite after consuming any of the immediate hosts which may include longnose lancetfish (Alepisaurus ferox) or opah (Lampris guttatus).

Blue sharks show a behavior very close to schooling. Thus, they travel in larger groups of many like individuals. One amazing Blue shark fact from this behavior is that they portray a characteristic hierarchy within the schools.

This hierarchy is evident in their segregation of sizes and sex. As such, they would be in groups of all male sharks or all-female Blue sharks.

There are only very few ocean sharks that show schooling behavior and the Blue shark is one of them.

Most shark species have special senses that aid their survival. The Blue shark is not left out. As a result, they possess an organ called the “ampullae of Lorenzini”. This helps the shark develop a specialized sense of feeling.

Thus, Blue sharks can track their prey through the electromagnetic pulse. And, all living creatures emit this pulse. Even more, Blue sharks can sense other species’ heart beating from a distance of several miles away. This is one of the most amazing Blue shark facts.

The Blue shark is a viviparous shark species. As such, the females give birth to the young ones (pups) alive. They have a yolk-sac placenta and can deliver over a hundred pups per litter.

Blue sharks have a gestation period of about 9 to 12 months. They initiate courtship by the biting. That is, the male Blue sharks tend to bite the female to initiate copulation. As such, the presence or absence of bite scars is a means of identifying the sex of a mature Blue shark specimen.

Due to the violent biting ritual involved in mating, the female Blue sharks develop skin that is three times thicker than that of the males. Of course, this is an adaptation response.

There have been several attempts to keep the Blue shark in captivity. However, just like many other pelagic sharks, they do not fare well as captives. Note that captivity here involves public aquarium settings and never a home aquarium.

Thus, the first attempt to keep Blue sharks in captivity took place at Sea World San Diego which was in the year 1968. After this attempt, there also came a small number of public aquariums trials across North America, Europe, and Asia.

It is worthy to note that most of these attempts did not exceed 3 months’ duration. Which afterward, some were released back into the ocean.

For now, the record for the captive keeping of the Blue shark was set at Tokyo Sea Life Park, with two specimens. The first lasted 246 days while the second lasted 224 days.

What are the Challenges in Keeping Blue Sharks as Captives?

The primary challenges encountered were transportation, predation by larger sharks in the same tank, and the inability of Blue sharks to avoid smooth tank surfaces.

The issue with smaller species comes after introducing them into the tank. This is because a typical blue shark of small size is usually prone to predation by other sharks that would often be kept in the tank. Some of these predator sharks include bull shark, sandbar, grey reef, and sand tiger shark.

At Sea World San Diego, the several blue sharks held captive that was doing fairly well got eaten by bull sharks added to their exhibit. Thus, there is a challenge of predation in captive settings, making it difficult to keep blue sharks in captivity.

The third challenge is that of the blue shark finding it difficult to avoid smooth aquarium walls, windows, and other smooth surfaces. Hence, they tend to collide with these surfaces leading to abrasion on the shark’s body, especially the fins and snout. This may likely result in serious infections.

Even with several attempts of keeping blue sharks in tanks of various shapes, sizes, and depths, they still showed this difficulty. Thus, the suggestion that blue sharks can better avoid prominent rockwork than smooth surfaces.

Here is a list of amazing blue shark facts that you can always remember.

The blue shark is an ocean shark very interesting to study. They possess interesting features both in their body physiology and behavioral pattern.

This page detailed the description, life, and amazing facts about Blue sharks. As such, even if you haven’t seen a blue shark, you can picture it.

And, while this shark may have commercial value, it is important to note the conservation status of this species and act to the benefit of nature.