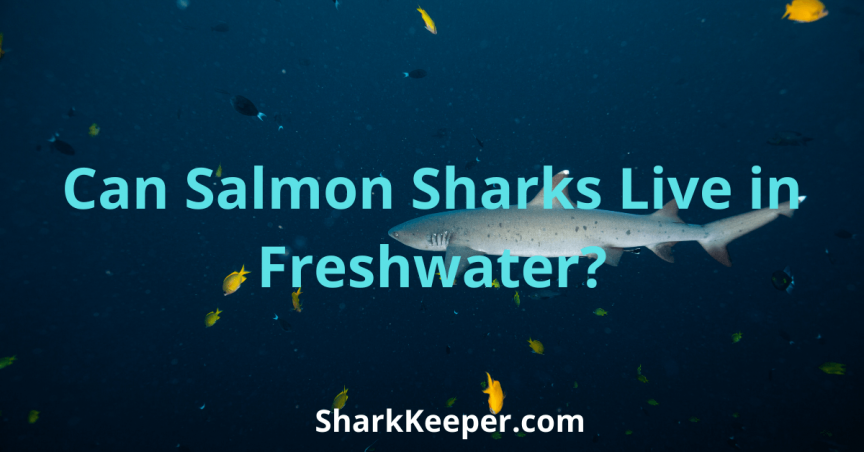 Salmon sharks are large sharks that live in the north Pacific where they hunt their favorite prey – salmon.

Let’s go on to find out some other interesting features of the salmon shark, shall we?

Do Both Sexes of Salmon Shark Stay in the Same Place?

You’ll expect that both sexes should inhabit the same place like most other animals; this species of shark although do not live up to this expectation.

These sharks can be found anywhere in the North Pacific, that is plenty of large sharks in the north pacific; interesting.

It is common for creatures of the same species to inhabit the same place. Species that live in the same location, protect each other as zebras protect themselves from carnivorous animals. They could, however, still prey on each other like some species of sharks. Also, if they stay together, they could mate and reproduce.

Salmon sharks however show a very different pattern in reproduction as both sexes stay in a different location. Fascinating? Are you beginning to wonder how farther away from each other? Well, worry no more.

Salmon sharks are large sharks too, the fact that they do not live in warm waters does not mean that they aren’t sharks or that they are small sharks.

The pups of salmon sharks are similar to the adult ones, with not too many differences asides from that they do not have blotches. The snout of these sharks is short and cone-shaped.

In some cases, you could mistake them for mackerel sharks otherwise known as Lamna nasus; you could however identify and differentiate both by comparing the free ends of their first dorsal fin – for the salmon shark it is as dark as their dorsal fins while the mackerel sharks, it is white and shows a dividing line.

How do salmon sharks reproduce?

They reproduce via aplacental viviparity. When the female salmon sharks are fertilized, they carry the eggs in their uterus till they hatch in the uterus. Then the biggest of the pups would begin to eat their siblings till there are two to five left.

The survival of these pups in the uteri is survival of the fittest – eat or be eaten. The salmon shark also has the same gestation period as humans – nine months.

Breeding usually takes place around August and September which means pups are born in spring and early summer. Breeding of the female shark happens about every two years.

Ultimately, after the birth of these pups, they begin to live on their own without care from the adult salmon sharks.

What Do Salmon Sharks Eat?

Feeding is essential for every creature to survive. Salmon sharks are like every other shark, deadly hunters, and skillful hunters.

Salmon sharks earned their name from eating their favorite prey – salmons. So when the salmon shark isn’t preying on salmons, it is basically eating any other thing that can fit into its mouth; typical of most sharks.

Movies and books however portray sharks to also eat humans, but that’s not so true about sharks, not even salmon sharks.

Even when they have been some records of shark attacks on humans, there’s been no record of a salmon shark attacking humans.

Are Salmon Sharks Dangerous To Humans?

We’d like to think that sharks generally are not nice to humans; their plenteous teeth are scary too. These thoughts about sharks are not true.

Sharks’ attacks on humans are accidental as humans are not on the shark’s menu. You’d like to know that after taking a bite off a human, they spit it out.

The shark’s relation to the great white shark and the mako shark with its large size has earned it the likeliness of attacking humans. They are potentially dangerous to humans but then there’s been no record of their attack on humans.

So, like every other shark, the salmon shark has more to fear from humans than we have to fear from them. Their ruthlessness and teeth are so scary but it’s us who hunt them for their flesh. So, don’t let these sharks scare you, though you should learn to keep your distance.

How Long Can A Salmon Shark Live?

Sharks have continued to evolve and even survived what dinosaurs couldn’t survive. They’ve shown to the world to be built for the kill and survival.

Which Shark Can Survive in Freshwaters?

The sharks that can survive in freshwater are the bull shark and the river sharks. Although there are some that can venture into freshwater,, they do not venture too far into them; like the lemon shark. Check source.

Lemon sharks have been recorded to be involved in 10 unprovoked human attacks. As they inhabit coastal waters where people go swimming, surf, and dive.

The fact that some sharks can survive in freshwater might be scary to those people who visit lakes and rivers but then remember humans are not on the menu of sharks.

These sharks are so big they were named “great”; also they are the largest predatory fish on the planet. They’re relatively the size of a school bus; overwhelming right? I know.

And yes, most of the shark attacks you have heard about or read in books are attributed to the great white shark. These gigantic creatures are very curious so when they attack humans, they just bite and spit out later – sample biting.

Great white sharks need salt for survival, if they peradventure get into freshwater, they wouldn’t be able to survive for too long. They could just get in freshwater to feed.

Meanwhile, bull sharks can survive both in freshwater and saltwater, it can also swim up rivers and cope with shallow water; the only shark that can do this.

In the end, we get to know that salmon sharks can live in freshwater as they are seen anywhere in the north pacific. These sharks do not need salt to be able to survive like the great white shark.

In addition, salmon sharks earned their name from preying on salmons, and just like every other shark, humans are not on the menu of these creatures.