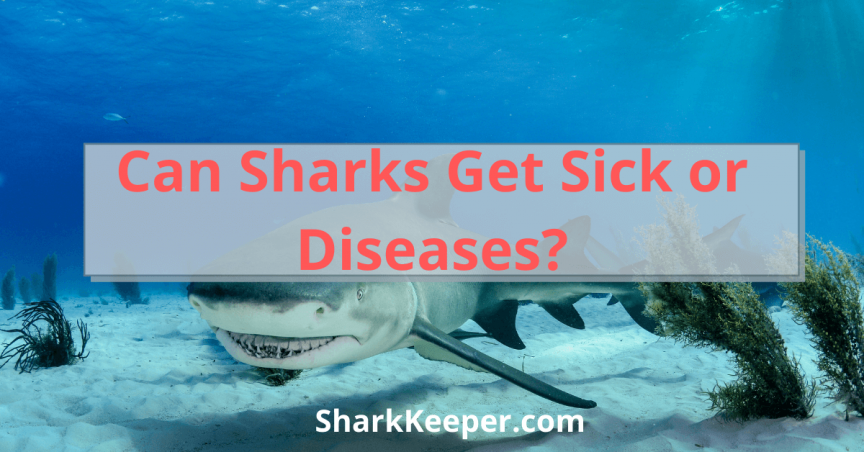 So, can sharks get sick or diseases? Yes! Although sharks are immune to a large number of diseases. They are the only animal that rarely gets sick. They are immune to almost every known disease. Or, at least as believed by scientists.

Research stated that sharks might be the first ever vertebrate animals in the world to develop the modern immune system. They used the millions of years they existed to make it perfect. Thus, they are more resistant to diseases compared to humans.

In this case, the blood of sharks is always ready to fight off any infection. This is due to their strong immune system. Unlike the blood of humans and other vertebrates that only release infection-fighting compounds after sustaining injury or infection.

Are Sharks Immune to All Diseases?

No living thing is immune to all diseases. Sharks’ immune systems are really strong to avoid diseases. They possess fibrous tissue which makes them very tough animals. Their skin is important for making sandpaper because its skin possesses spikes which are very sharp instead of
scales.

The research in 1992 led to the thought of sharks are immune to all diseases. The research began in the year 1992, which Williams Lane and Linda Comac published the book “SHARKS DON’T GET CANCER”. However, the book was unable to claim that sharks never get cancer. Rather they argued that the unusual occurrence of tumor in sharks was due to the elements in their cartilage fighting against cancer.

Sharks have an immune system the relies on many organs like lymphoid tissues, T-cell receptors, and immunoglobulin. These work hand in hand to fight off disease and infection in their body just like other vertebrates, humans inclusive.

The mammal tissue that produces lymphocytes in sharks occurs in their esophagus and gonads. Sharks do not possess lymph nodes. As a result, sharks’ blood always contain immune cells. However, humans and other vertebrates only release these cells to fight infections.

Is It True That Sharks Never Get Sick?

The immune system of sharks is very efficient. But, they still get sick and infected like every other animal on the planet. Their immune system is not perfect. All human and animal that lives on Earth get sick from time to time. Basically, sharks’ blood is always ready to fight any infection but it still can’t resist all diseases.

However, sharks do not fall ill easily but they definitely get sick. Sharks’ body frames consists of only cartilage. The tough, fibrous tissue that shapes their noses and ears. Williams said: “As incredible as sharks are, they are not immune to illness. Just as other animals, they are still likely to be affected by parasites, diseases, and disabilities, including cancer.” Check source.

Most shark diseases comes from various sources which includes pollutants, bacteria, viruses, bacteria, fungi, parasites, and even algae. The immune system of sharks seem very strong. But, this doesn’t mean that they are resilient from every disease.

Sharks are susceptible to the following common diseases – Vibrio (bacteria of many types that cause infection), viral dermatitis (a kind of herpes), Pasteurella, and Staphylococcus.

Sharks get sick due to water temperature changes, pH changes, etc. Also, the introduction of pollutants and chemicals causes immunosuppression in sharks. Thus, increasing the likelihood of parasites and diseases.

Can Humans Get Sick from Sharks?

Just as humans contract diseases from other animals, there are also shark-borne diseases. We have the knowledge that sharks get sick but is it possible that sharks can transfer diseases to us?

Well, we can get diseases from sharks if we’re not careful with these creatures. Sharks carry several zoonotic diseases that are transferrable to humans. For example, Giardia is a common disease that you can contract from a carrier shark.

This disease is not fatal. It is just a parasite affecting the intestines. It would usually leads to diarrhea. Giardia wouldn’t normally exceed 2 – 6 weeks in the body.

How Can A Human Get Infected with Shark-Borne Diseases?

Just like many other diseases carried by animals, you can get infected when a shark bites you. Shark bites are rare and hardly occur. However, a major concern following a shark bite is infection. The mouth of the shark carries diseases more than any other part of their body. This is the same with humans and most other animals.

Note that the seriousness of a shark’s bite does not depend on the depth of the bite. This means that a tiny cut from a shark’s bite can cause a heavy damage due the diseases the shark carries in its mouth. Sometimes, the damage may last even when the wound has healed. It is a rare occurrence, however, never put yourself in the position where you can get bitten by a shark.

Can Sharks Get Tumors?

The first tumor was found on a shark in 1908. Since then, there have been other samples collected from sharks with cancerous tumors. This proves that these dangerous predators are not immune to cancer.

For over a century, researchers keep detecting cancerous tumors in sharks. In fact, 18 shark species and more have been identified with tumors. This is from 1908, the year of first discovery.

Conducting a research on sharks specifically on cancer seems to be very difficult. This is because the sharks with the infections would likely be dead before researchers can to locate them in the water.

The fishermen who caught infected ones also discarded these sick sharks since they have no market value. In South Australia near the Neptune Islands, researchers found a tumor in the lower jaw of a great white shark. It is unknown what causes cancer to the shark. Yes, sharks do get cancer.

The saying that sharks don’t get cancer was a fallacy. The people that sell shark cartilage which they claim cures cancer promoted it for personal gains. Medically and scientifically the myth that sharks don’t get cancer and therefore their cartilage can be used as a cancer cure is condemned. There has been an increase in cancerous tumor cases in marine over the years.

Where Did the Rumor Start That Sharks Do Not Get Tumors?

The rumor first started spreading in the 1970s. Of course, it was easy to make claims that sharks do not get tumors at this stage. This is because shark cancer research is still at its earliset stages.

There was the discovery that new blood cells do not grow when cartilage is present. This discovery was made by the duo of Henry Brem and Judah Folkman that were from the John Hopkins School of Medicine. It was certain that the growth of blood vessel plays an important role in the cancerous tumors growth. The duo hence resolved that cartilage maybe could serve as treatment for cancer.

Following this research, Robert Langer thought that since sharks’ skeletal system consists of only cartilage, they would serve as an abundant supply of cartilage. He also confirmed the research with the cartilage of shark and found that they also prevent the growth of blood vessel.

Another researcher from the Mote Marine Laboratories, Carl Luer tried to further this research. He tested how vulnerable sharks can be in the presence of a popular carcinogen, aflatoxin B1. Luer made a claim that there was no cancer growth in any of his sharks.

Several fake medical practitioners claimed they now have a cure/prevention to cancer using shark’s cartilage referencing Luer’s research. Dr. I. William Lee was a culprit. He got Ph.D. for biochemistry at the Rutgers University.

He made a preposterous claim of positive medical results from the shark pills by his company. As a result, the U.S. government moved to ban his company’s fake advert in 2004.

The U.S. may not profit Lee and his company, However, the false claim already traveled the world. Consider markets that governments didn’t stop such false advertisements.

On this page, you can see that sharks actually get diseases which counters the misconception that they do not get diseases. Even people who buy supplements from sharks as a treatment for cancer now know that sharks themselves get cancer and do not provide a cure for cancer.

If in any way sharks hold the cure to cancer, the medical industry requires more research to prove this.