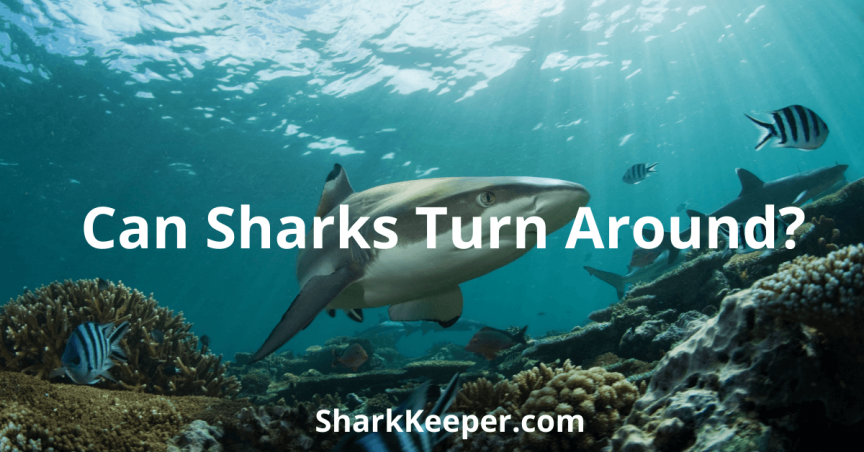 Most times when you see sharks, they usually swim in a straightforward motion. They do not often change direction or turn around to go back. Of course, this will lead you to wonder if sharks can turn around?

So, can sharks turn around? The answer is, yes, sharks can turn around. The backbone of sharks is made of cartilages. Cartilages are not as strong as bone. As a result, they allow the shark to be able to turn around swiftly and almost reach for its tail.

Cartilages instead of bones might be seen as a weakness for the shark. This is because bones are stronger but then cartilages are of more importance to them than bones would be. The cartilages play other important roles for the shark-like allowing it to swim fast.

How Is It Possible for A Shark to Turn Around?

With their large sizes, you might have to think that turning around would be a tedious task for them to complete but then when you get to see them turn, you’d leave your mouth agape.

Sharks are in the cartilaginous class of fish, this means that they do not have bones, not even a single one but cartilages – incredible, right?

Cartilages for sharks are just a whole bunch of advantages. It also prevents wear and tear that happens due to the enormous amount of friction that happens in the shark’s joints.

Can Sharks Turn Their Heads?

Since a shark can turn its whole body around, are you wondering if it can turn its head around? Well, you aren’t alone on this, tons of people have been wondering too.

Well, the shark being great hunters rely on their sense of smell to be able to trace the smell of blood and also to be able to hear the sounds of fishes.

Some sharks can hear the sounds from a prey from over 3,000 feet away while some can smell a drop of blood from far away.
Sharks would have to turn their head from side to side to know which direction those sounds are coming from or the smell is coming from.

So, yes, sharks can turn their whole body around and can as well turn their head to find the direction smell or sound is coming from. The hammerhead shark uses its head for turning. See.

The Importance of Sharks Cartilages?

The human body has bones and cartilages. Even at birth, the human baby has more cartilages than bones, though some cartilages later become bones.

Sharks however have no bone but cartilages although research once showed that there are sharks that had bones but then it was just cartilages that ossified.

These cartilages help hold the skin and muscle of the shark in place; help the shark turn swiftly to get a hold of what’s on their tail, or to turn away from danger.

For the areas that need more protection like the skull and the snout area, the cartilages in those areas are firmer and sturdy because of the extra calcium salts coating.

Aren’t these creatures just machines swimming in the ocean?

Can A Shark Swim Backwards?

Let me guess, you think sharks can swim backward. Well, don’t feel bad, this article would clear the air.

You must have seen a dolphin be able to swim backward and upside down. This is also the same for whales as they swim backward. You think a shark should also have that ability because they somehow look alike. Unfortunately, these aquatic machines sure have a disadvantage.

As a matter of fact, water gets through the gills of sharks just so they can get oxygen to breathe, they do this by swimming forward. If sharks are pulled backward, they can suffocate because water would not get into their gills.

When sharks cannot get oxygen from water, they suffocate. So, sharks are often killed by pulling them back when they are in the water. That way you would be interrupting its breathing process.

Some people would say that sharks, as well as other fishes, drown in water but technically it’s not drowning, it is suffocating.

Sharks do not have feet but some species of sharks have evolved and have found a way to survive in their habitat.

The sharks that ‘walk’ do not grow feet either but they use their pectoral and pelvic fins as feet to walk through reef systems. Epaulette sharks use their fins as feet to ‘walk’ between coral heads at low tide, along the seafloor.

The ability of the epaulette shark to survive with little or no oxygen has also helped it be able to walk on land.

Meanwhile, they’ve discovered four more species, making it a total of nine species of walking sharks. It is incredible to be excellent swimmers, apex predators, and ‘walkers’.

As humans, we know that sleep is pertinent for healthy living. Just as humans sleep so do other creatures including other mammals.

The mode of sleep is however different for mammals and other creatures, even the time of sleep; some sleep during the day while some sleep at night, some can sleep at day or night.

For a long, it has been a common misconception that sharks do not sleep as they’d need to always be on the move to stay alive.

Now, you’d think how can a shark sleep underwater, how do they close their eyes. For sharks, it does not entirely sleep but a period of rest.

They shed teeth all their whole lives and they are being replaced by new ones; they have up to 50,000 teeth during their lifetime. Shocking, right? Well, they do not have all these teeth at once.

Their teeth are arranged in layers, so as soon as they lose some, new sharp ones replace them. On average, sharks have 15 rows of teeth in each jaw; most only have about five. The bull shark is different though, it has up to 50 rows of teeth with up to 7 teeth in each row. These averages to about 350 teeth at one time. See reference

Shark’s teeth are sometimes found washed onto beaches. While the body of the shark decomposes, its teeth can remain because it can fossilize.