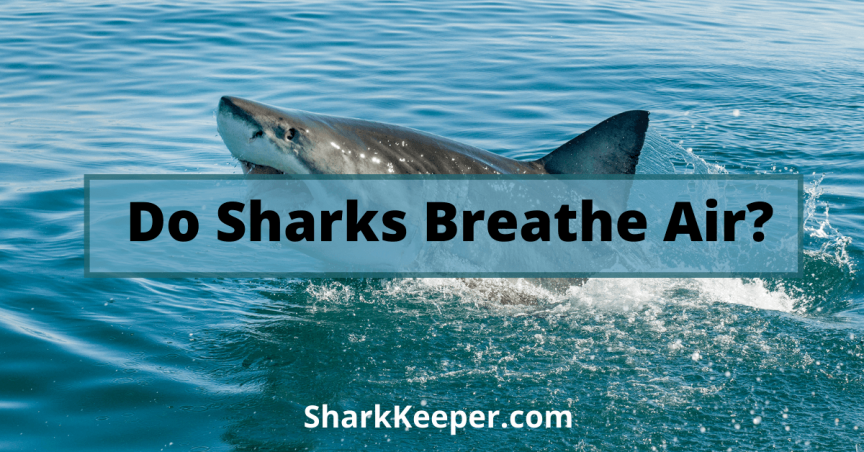 Sharks are apex predators in the aquatic habitat. Sharks just like every human need to breathe to stay alive. However, do these creatures breathe as we do? Do they breathe air?

Do sharks breathe air? No! Sharks don’t have lungs so they don’t breathe air. Sharks have gills so instead of breathing air, they extract oxygen from the water surrounding them through their gills.

Thinking of sharks breathing air, it should come to mind that air is a different element from the water. So that means a shark will have to swim to the top of the water or come ashore to breathe air.

How do sharks breathe?

Sharks breathe oxygen, instead of breathing air. The concentration of oxygen in water is terribly less than in air. So, the sharks have their own way of producing their own oxygen out of the water.

Sharks don’t have lungs and they don’t breathe through their nose. They pump water over their gills. As water passes over their gills, the same capillaries allow oxygen to enter the bloodstream.

Sharks usually have about 5 to 7 gills arches, each bearing one-gill slit. Some sharks need to keep moving to breathe while some can pump water over their gills.

The direction that water moves are different from that of water. They allow a maximum amount of water flow from the water to their bloodstream. This process is what we refer to as “counter-current flow”.

Do Sharks Breathe on Land?

Sharks can’t breathe on land as they don’t have lungs. They need to be pumping water over their gills to get oxygen and breathe. However, they can survive some minutes to hours on land depending on the circumstances surrounding it or the species of shark.

Of course, over the years you may have heard of some sharks that swam ashore or being swept ashore by the wave. Some are being captured by humans hunting sharks. Also, some die while in hostage and although many things can happen to it, suffocation might be one of them.

It will be naive to think that sharks die off immediately after they have washed ashore. Even humans don’t drown as soon as they get into the water. Now the question is how some sharks are able to survive up to an hour on land.

What Happens When Sharks are on Land?

Sharks can breathe as long as there is water flowing through their gills. So, sharks can draw water to their gills from their surroundings and extract oxygen from it before it runs out of water.

Some sharks survive on land before being placed back inside the water and die in the process. The problem is that its gills provide a large surface area to aid gaseous exchange. Meanwhile when outside the water, the gill flaps stick on top of each other to prevent the passage of gas causing the shark to have a brain disorder called hypoxia.

There are other problems a shark can encounter while it’s on land or outside the water. The shark is a cartilaginous animal and it doesn’t have lungs. Therefore, in its tussle to get back into the water and obtain oxygen, it can cause harm to its internal organs leading to death.

They release stress hormones that increase the sharks’ blood level as they continue to try to get back into the water. It’ll take along for the blood composition to return to normal.

The Respiratory System of Sharks

The respiratory system of sharks begins and ends with the gills. You can see the sharks’ gill behind the side of the mouth cavity. It consists of fleshy filaments supported by gill arches filled with blood vessels that is why it is a bright red color.

Flaps of skin serves to protects the gills. The blood capillaries in the gill filament are close to collect oxygen from the water and give out carbon dioxide.

Do Sharks Have Nose?

Yes, sharks have a nose. But their nose is exclusively for perceiving smell. In fact, they have a supernatural sense of smell and a sensitive olfactory system.

Due to the extreme sensitivity of sharks’ cells and their enlarged olfactory bulb in their brain. They have the ability to detect a very amount of chemicals in the water. Depending on the shark and the type of chemical involved.

Sharks can detect a single drop of blood from a long distance in the ocean. Their nostrils are located right under their snout and it is exclusively meant for smelling and not even breathing just like humans.

Can Sharks Hold Their Breath?

Surprisingly yes, sharks can hold their breath underwater. It helps hammerhead sharks hunt in cold deep waters. The hammerhead shark Sphyrna lewini is a coastal and semi oceanic shark in the family Sphyrnidae.

These sharks hold their breath by shutting their mouth or by clamping their gills shut. Either way, they both warrant no passage of water, or basically, no exchange of gas will take place during deep dives.

Hammerhead sharks are warm-blooded and when their body temperature gets too low, they lose muscle function, visual focus, and their metabolism slows down.

How Long Can A Whale Shark Stay Underwater?

All sharks can’t breathe without water. The presence of gills and no lungs makes it difficult for them to stay outside the water. The water is their source of oxygen. They cannot walk on land and they only have fins to navigate through the water.

Everything about the shark just shows that they are specifically meant to stay in the water and yes, Whale sharks can stay underwater from birth to death. They don’t have to surface to breathe like the blue whales or dolphins.

Sharks can’t breathe air. They extract their oxygen from the water and exhale carbon dioxide. Both chemical elements can dissolve in water and can be extracted with the gills by the sharks.