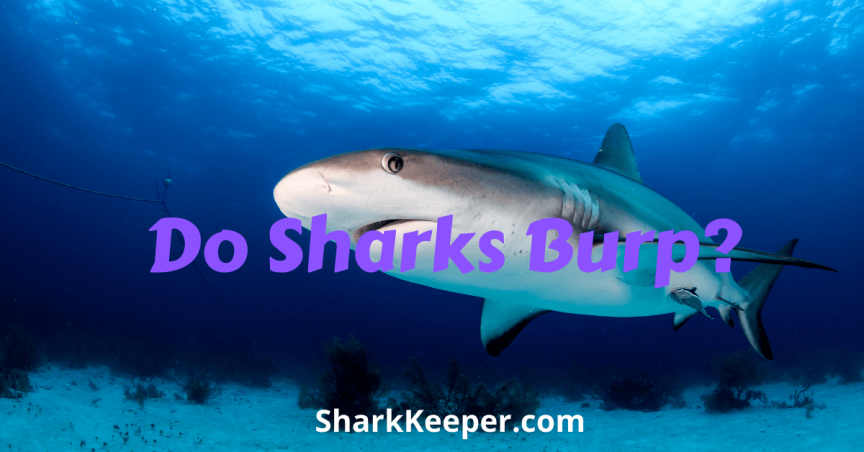 Are you wondering if sharks do burp? Well, it is something worth giving a second thought. Of course, considering that burping has to do with letting out gas from the stomach. Sharks don’t breathe air, so how could they possibly burp?

Answering the question “do sharks burp?” Yes, sharks do burp. They are not immune to the occasional belching. True that sharks do not breathe air, however air can enter their stomach. Even humans do not burp or belch because they breathe air. Instead, they do so because air entered their stomach. This is so with sharks.

Well, before going further, let us consider the definition of burp. Burp simply means the act of letting out air from the stomach through the mouth with a sound. It could also mean belching. Merriam-Webster gives a more detailed definition.

Let us now see why sharks burp and why it is important to these creatures.

What Causes Burping for Sharks?

It would be pertinent to note the causes of burps for sharks.

For sharks, burping occurs too when they take in too much air. The sand tiger shark is known to swim to the surface to gulp air. They take in air to inflate their stomach so they could float motionless in water whilst they hunt prey.

To return to their normal state and adjust buoyancy, the tiger shark burps. So, all that they need to switch from normal to motionless is gulping air and burping. A pretty hunting technique, right?

Burping for humans usually occurs when the stomach distends or expands due to air swallowed excessively.

Swallowing too much air than the body needs makes the body release the air through burping. There are ways through which too much air can be swallowed; they are: eating or drinking too quickly, anxiously, and drinking carbonated beverages.

Some species of sharks are careless eaters with a voracious appetite that is mostly insatiable; they gulp down whatever they come across.

Most shark species are deadly hunters, dangerous, and fast at attacking. These species commonly make prey out of anything that comes along their way.

As a result, sharks literally throw up their stomach. They do this as a way of cleansing it of things that are not needed like feathers, clothes, jewelry, rubber, etc.

For the fact that the shark species is over three hundred, their food menu differs. Most sharks feed on smaller fishes and invertebrates while some are bottom feeders that feed on planktons,

Sometimes, they vomit their latest meal as a way of warding off predators, so predators eat the vomit instead of attacking the shark. Some gluttonous sharks vomit just so they can take in more food and some vomit when they are super stressed out.

Coughing isn’t an attribute for humans or some mammals alone, a whale shark coughs too. The whale shark is the biggest fish in the ocean.

The whale shark often coughs to clear particles from their filter pads. The filter pads can be clustered with many unwanted things as the whale shark is a filter feeder swimming forward to just swallow prey.

Swallowing prey whole allows for unwanted particles to get into their mouth, so they ‘cough’ to clear their filter pad of those unwanted things.

Whale sharks are the world’s largest living fish, growing up to 12 meters long and their mouth up to 1.5m wide with over 300 rows of teeth. Asides from that, their pattern of spots is unique just like the human fingerprint.

Other sharks would use their plenteous teeth to chunk meat off their prey but the whale shark with all its teeth does not have to do that to prey; rather they just swallow them whole.

Sharks have two nostrils (nares) underneath their snout which they use for smelling. The difference is the nostrils of sharks do not join up to the back of their throat like that of humans which is the reason why they can’t sneeze as humans do.

For sneezing to happen, air or water has to be released from the lungs through the nose. Unfortunately, sharks do not have lungs. Instead of sneezing as humans do, when something gets into their nostrils, they try to shake it off.

Their inability to sneeze doesn’t hamper the fact that their nose is still superior to ours in terms of smell.

Sharks are the apex predator of the ocean, it’s right to wonder what makes them so. Do they roar like lions, land apex predators?

Sharks have not developed any organ for producing sounds, making them silent predators. In the animal world, surprises are the best forms of attack, the ability to be stealth when you attack keeps your prey in its comfort zone till you sneak up and attack.

The species of sharks that specialized in sneak attacks is the Great White Shark. They prefer to attack their prey when they’re unaware. Its ability to completely leap out of the water to catch prey makes it a great hunter. See

They do not roar. Researches have also shown that sharks seem not to like sound, they move in the ocean in ghost-like silence. However, there are species of shark that can make sounds similar to a dog bark – draughtsboard shark and swellshark.

How Do Sharks Communicate?

Sound is a means of communication, we just found out that sharks are silent predators that do not like sounds unless sounds that attract them to prey.

So, how do these sharks communicate with each other in the ocean?

It is pertinent to note that in as much as sharks do not have organs that produce sounds, they are intelligent enough to be able to communicate with their body. For example, by nodding their head and opening their jaws.

We see sharks as sadistic, insatiable killers. That’s not entirely true, to a degree or another they have feelings even though they are not all confirmed yet but they are there.

Their super-senses also help them be able to communicate with their environment. The shark has the human senses of smell, sight, hearing, and taste along with two others of their own. These are aided by specials receptors which are electroreceptors and lateral lines.

In as much, as the ocean is often called the “silent world”, other creatures of the ocean also make sounds. For example, the whales are reported to sing haunting songs, dolphins yap, and clip. Check source.

How Do Whales Communicate?

Mammals survive with the ability to communicate playing a huge role. Whales are sea mammals and they also communicate as a way of going about their lives and surviving.

Whales travel in groups called pods; this entirely means that they’d be a sort of communication amongst them when they are under attack when they want to hunt down prey when they travel together. The humpback whales sing while some make click sounds.

The method that whales communicate with are intriguing, they are called echolocation. The whales send out sounds that come back to them in form of a message. Research has also shown that whales in the wild and those in captivity have different ways of communication.

When hunting, whales can use their tails and fins to make loud slapping noises on the face of water to scare schools of fish and make them come together; it could also be a form of warning (https://oceanservice.noaa.gov/facts/whalesounds.html/).

Whales have a different way of breathing when compared to humans. However, they sneeze too; it is also different from the way humans sneeze.

Whales are conscious breathers because they would not want to take in the water when they breathe, unlike humans who cannot manually control their breathing.

This also applies to both parties sneezing; humans sneeze as a reflex response to an irritant that has found its way to the human nose.

Whales have a developed way they could control their breathing and sneezing. They have been observed coughing or exhaling oxygen at a very fast pace when they suffer from a respiratory infection.

Coughing and exhaling fast is their way of removing irritants that might include germs or debris.

Amazing findings of sharks’ ability to burp, right? Anyways, this page clears the air for those asking questions like “Do sharks burp?”, “What causes a shark to burp?” “Do sharks roar?” “Do sharks sneeze” and other related questions.

In the end, we found out that sharks can burp even though their organs for producing sounds aren’t well developed.

For emphasis, sharks can burp and even the draughtsboard and swellshark can make sounds like bark when they are on land. The sand tiger shark gulps air to be able to float motionlessly and then burps so that it returns back to normal.