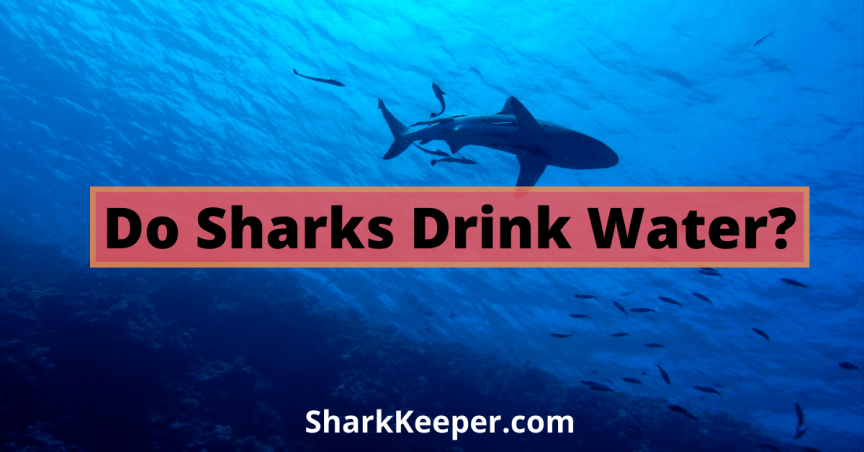 Sharks are streamlined types of fishes that do not survive outside the water. Therefore, asking whether sharks drink water might sound like a rhetorical question. However, there is always an extra piece of information that you could work with.

Sharks have gills which they use in taking oxygen directly out of the water. That is to say, for sharks to get oxygen out of the water, they take in water through their mouth which flows over their gills. Shark does not survive underwater without their gills.

Let us find out more about sharks and “how” or “why” they drink water.

Do Sharks Get Thirsty?

Sharks do not get thirsty at all. They can never ever get thirsty because they live in water. As a result, they are always going to drink small amounts of water when they need it. Sharks tend to have the same osmotic pressure as the seawater.

Do Sharks Need to Drink Water?

Some sharks do not actively drink water, and some do, but all of them needs the water that flows into their body to regulate metabolism and dissolve compounds that go into or out of the body.

How Do Sharks Get Their Water?

They excrete the excess salt they ingest in their diet in other to maintain balance in the concentration of salt in their blood. The rectal gland at the end of the intestine helps to absorb the extra salt from their blood and pass it to the intestines for excretion out of their body.

Sharks that live in saltwater are either osmoregulatory or osmoconformers in other for them to stay hydrated in the ocean. Saltwater sharks actively drink water and excrete a small volume of highly concentrated urine. The rest of the water moves out of their body through their skins and gills due to the osmotic in balance.

They have a special cell in their gills that processes the water and take out the salt in the water to maintain the balance. Osmosis promotes loss of water from the body of marine sharks (saltwater) and absorption of water by that of freshwater.

The mucus in the body of the fresh-water sharks slows the absorption process but not entirely sufficient to completely stop the absorption.

Sharks that live in freshwater habitats do not actively drink water but absorb water through their gills and skin or incidentally due to the intake of food. They urinate a large volume of very dilute urine.

The sharks that live in freshwater with a much lower concentration of salts than they require inside their bodies. They have special cells in the gills called chloride cells.

The chloride cells produce a large number of enzymes that control the flow of dissolved salt like sodium ions and potassium ions across the cell membrane in other to keep those ions out of their bodies.

Do Sharks Need Water to Breathe?

Human beings use their lungs to breathe but sharks do not possess lungs instead they make use of a respiratory organ called gills. As water passes over their respiratory organ’s membrane, a tiny blood vessel extracts oxygen from the water and pumps it throughout the shark’s body. The carbon dioxide waste also passes through from the shark’s blood and out of its body through the gill tissue.

The hole behind the shark’s eye called the spiracle helps the shark to take in water and then push it over the gills to help them breathe. This type of breathing is the buccal pumping. Some species of sharks only breathe by swimming through the water and ramming water through their mouth and they are the obligate ram ventilators.

Sharks do not urinate the normal way we know. Sharks do not have urinary tract or urethra to urinate from except sharks like the mako sharks. Their urine is absorbed in their flesh and removed through their skin. They retain urea so that their bodies are at the same salt concentration as the saltwater outside.

The fresh-water sharks have to urinate almost all the time to remove the water that enters into their bodies.

Do Shark Swallow Water When They Swallow Their Food?

Whale Sharks actively drink water, but they drink salt water not freshwater. They have a specialized kidney to process the salt in the saltwater they gulp in. These salts are excreted in their urine. As the whale process the prey, it extracts water.

Whale sharks are species of sharks that live in the ocean. They do not stay in freshwater habitat but a saltwater habitat.

How Much Water Does A Whale Shark Drink?

When whale sharks swim through the water, they open their mouth to capture creatures. Thereby, allowing large amounts of water to get trapped in their mouth. An adult whale shark when swimming around the water can take up to 10,000 gallons of water. But, they don’t help swallow all the water.

Whale sharks feed mostly on small organisms and prey like planktons. When they swim through the water they can draw in a big gulp of plankton-rich water. It then closes its mouth and expels water through its set of large gills.

Do Whale Sharks Spit Out Water from Their Mouth Like The Blue Whale?

They only breathe when they are on the surface of the ocean. They take in and let out a lot of air at once quickly with the help of their strong lung muscles.

When a Blue whale comes up to the surface of the ocean after diving, it breathes out the old air at once quickly. The air is seen to go up straight. This is because of the location of the nose which is on the top of its head.

The air is usually warmer than the air above the surface of the water. The water you think you see is the stream of warm air that is forced out of their lungs.

Whale sharks can only suffocate by being exposed to dry air or water of an inappropriate salinity. This is because these conditions will affect diffusion gradients across the cell membrane. They don’t consume much water while swimming. They expel water from their gills.

Sharks live in water so in one way or another they take in water. In fact, for sharks to breathe, water goes in through their mouth to extract oxygen using their lungs.

Though, sharks do not need to get thirsty to drink water, they are always hydrated as aquatic animals.