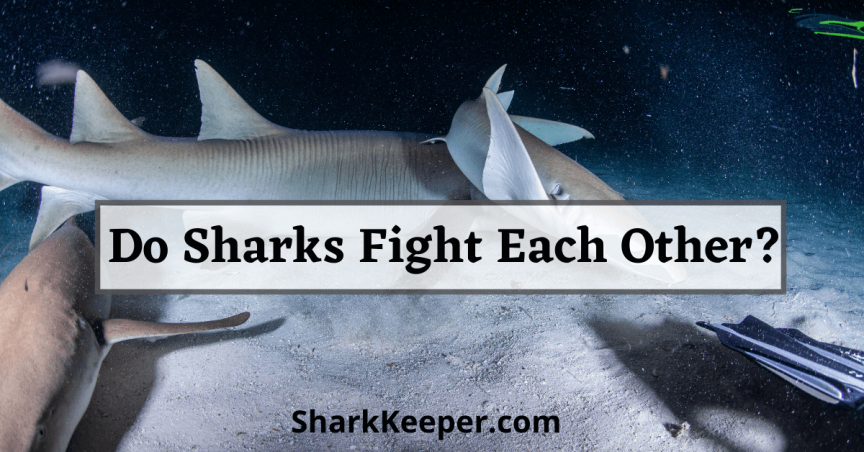 With the utter of the name shark, what spontaneously comes to our mind is a fearsome sea predator. Therefore, you can easily imagine them fighting in the sea. But, do sharks fight each other? What would make them fight themselves if they do?

A speculation whether these fearsome creatures fight each other is no longer in contention. All sharks are a cannibal. This entails that they will be happy to tear out a chunk of meat off each other if they get the chance. Apart from filter feeders, these sharks hunt for food often. Some sharks hunt daily for food, but the real physiology is, the bigger the food the longer the shark can go without a good.

How Do We Know Sharks Attack Each Other?

There has been footage of these apex predators fighting each other. The footage shows the sharks dangling around the water trying to show its superior strengths. See video.

There are reports of carcasses of sharks to have been missing some parts of its body. These sharks’ corpses usually occur in the ocean around the Australian gold coast. Some were with severe attack injuries, and harmed with mostly mutilation.

A photograph of a shark horribly mutilated shows a 12ft long Great White shark carcass. Almost torn into 2 by 2 major bites. These bites removed most of the middle part of its body. There might be doubts that it’s not been attacked by another shark.

Meanwhile, this is a big shark with a massive bite. Before any predator will have the immense amount of bite to take a massive bite off another shark (a Great White shark), the predator got to be pretty big itself.

Why Do Sharks Attack Each Other?

The simple reason was said earlier; sharks are cannibals. A professor from the Australian Institute of marine science, Professor Mark Meekan. He believes these shark attacks are on the rise and this might be because of man-made activities. Check Source

The measures used to keep these hungry predators off the beach away from swimmers. The nets and hated hooks deployed on the Australian gold coast for safety measures. These hooks and nets sometimes trap sharks.

These sharks then send out distress signals. Other rival predators can then pick up the signal and on arrival, they are welcomed by an easy meal. No one says no to an easy meal.

Do Sharks Fight Each Other In the Womb?

Sharks’ tussle for food starts from the uterus. This is to say that they are chronic cannibals. The species practices a form of sibling killing called intrauterine cannibalization.

Female sharks have 2 uteruses, and it can carry as many as hundreds of eggs. When female sharks are in their fertility period, they can have sex with many male sharks. They can get pregnant and have multiple babies with several different males.

In a period of 4 years, Chapman and six of his colleagues collected about 15 pregnant sand tiger sharks that die after being caught in the net off Richard’s Bay, South Africa. They performed genetic taste on different stages of the shark’s development. 60% of the time in the genetic test they were carrying babies only from the same father.

In the 1980s scientists found out that the sand tiger sharks eggs fertilize in the womb. When it fertilizes it will start to consume another embryo in the womb alongside the fetus. Other sharks’ species like great white consume unfertilized eggs in the womb.

During mating, it’s not necessarily a first come first serve issue. The shark with the higher level of testosterone (male sex cell) tends to fend off other male sharks from mating with their female counterparts.

Once a female sand tiger shark gives birth to a baby, her babies are more than 3 feet long. Just larger than the baby whale and as big as great white sharks’ babies.

Why is Sibling Cannibalization Important to These Sharks?

Chapman also highlighted that this early stage of mother sharks allowing their children to feed on others is an act of parental care. As it equips them to be aggressive to hunt when they are given birth to. Check source.

When they are born, they are almost bigger than any other shark. Just like other sharks, their mother abandons their babies after birth. As they have fed in the uterus and grown bigger and aggressive to hunt.

The sharks are The Tiger shark, the Hammerhead shark, and the Great White shark.

A cookiecutter shark is another successful cannibal of all sharks. It is a tiny shark about 50 centimeters long but it preys on almost everything from tuna to great white sharks. The simple reason is that it’s not afraid of its big prey and its banks on its element of surprise and its powerful jaws.

Its mode of attack is stealthy as it swims from below to attack its prey. It attacks its prey and locks the underside of its victim and then sucks hard to remove a perfectly round chunk of flesh.

Dr. Papastamatiou said that you can see signs of cookiecutter sharks taken bites from other massive range of animals. He is a specialist in cookiecutter sharks. In his determination to learn more about shark’s behavior he dives with sharks to observe them in their natural habitat. Check source.

Do Shark Feed on Other Dead Shark Species?

Sharks are carnivorous in nature, which means they feed on other animals. Sharks have a broad range of seafood such as snails, sea urchins, crabs, fish, rays, other sharks, seals, and birds.

Some sharks eat carcasses. Carcasses are the body of a dead animal. Although most sharks feed on animals that are alive, some dead animals serve as an easy meal for the normally solitary predators.

Great white sharks measuring about 16ft (5 meters) long is said to have gathered around floating carcasses near South Africa’s seal island. They were attracted by the wind-blown slicks of chemicals from decomposing flesh. They feed mostly on their blubber. These sharks are rarely seen near the coast, else they are being attracted by whale’s carcasses or dying whales.

Researchers claimed that the whale carrion serves as a high-calorie food for great white sharks. They usually gather around the area with a dead whale and communally feast on the blubber. The biggest sharks take on the highest blubber content when the small sharks take on the lower blubber or keep off the whale. Then they scavenge on the piece of blubber drifted away from the carrion.

Sharks do fight each other mostly for food. They are cannibals so taking a bite off any animal on their menu is mostly their pleasure. Sharks fighting themselves is an activity that starts from the womb when they feed on each other as a struggle for survival. Not all sharks engage in sibling cannibalization.

However, there are pieces of evidence of sharks attacking or fighting each other, especially when in a feeding frenzy.