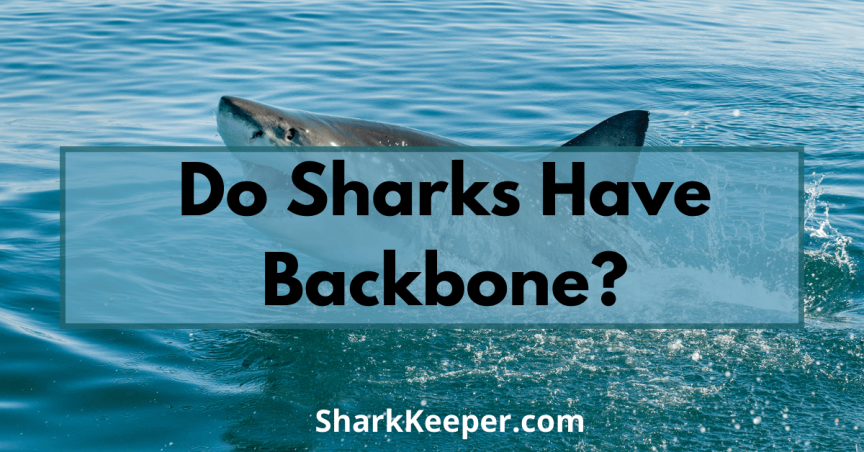 It is right for one to think that sharks are animals with plenty of bones. How could those creatures be that big, strong, agile, and not have bones?

Anyways, you also would have read somewhere or read in a kiddie’s book that these same creatures do not have bones and then you begin to wonder what then gives them their structure. If you’ve ever wondered if sharks have a backbone, you are not alone.

Do sharks have backbones? The answer is, yes, they have a backbone; the backbone of a shark is however made of – you guessed right – cartilage. High five! The word ‘bone’ makes it look deceiving. Sharks are boneless creatures, not even a single bone. Research has therefore shown that the ancestors of sharks had bones; those were just cartilages that ossified.

Now, that we know that sharks have a backbone, let us look at other topics as it concerns the backbone of sharks.

What Makes Up The ‘Backbone’ Of A Shark?

Already, we stated that the backbone of a shark is made up of cartilages. Cartilages are way lighter than bones but firm and rigid enough to keep the shark buoyant as well as hold muscle and skin in place.

The human body too has cartilages in the nose and ears. Even the human baby’s body is more of cartilages and that’s why they’re supple; cartilages later ossify and become bones.

You may think having cartilages instead of bones are disadvantageous to sharks. Well, you’re wrong.

The shark’s cartilage helps it be able to swim faster underwater. It also helps it to be able to turn around swiftly to get hold of what’s in its tail.

Remember these cartilages also help prevent wear and tear due to the enormous amount of friction that happens in the shark’s joints. Cartilages are strong in the skull and snout of the shark.

How does a ‘cartilaginous backbone’ benefit the shark?

Cartilaginous backbone benefits the shark in a way that a bony backbone would have been a disadvantage. The cartilage that makes up the backbone of a shark is lighter in weight than bones.

Cartilages aren’t as strong as bones but they can still hold the shark’s skin and muscle in place and in turn helps the shark be able to swim very fast, turn swiftly to get to their tails, or turn away from a predator.

These cartilages also help the shark be able to survive in its habitat; keeps them afloat. And, in places that need more protection like the shark’s skull and snout area, the cartilages in those areas are sturdier and firmer, coated with extra calcium salts.

Do Sharks Have Rib Cages?

The human ribs consists of flat bones that form part of the rib cages with the sole aim of protecting internal organs. In essence, rib cages are made of bones.

Sharks have no bones neither do they have rib cages made of cartilages. This in turn makes it possible for them to crush under their own weight whenever they are out of water.

If sharks are out of the water, the shark’s body would collapse onto their organs and crush them.

Should the question be why? Why does their body collapse onto their organs?

Well, why is because their cartilage in some areas of their body remains very weak to support the shark sufficiently; these areas include the jaw and the backbone. Finally, a disadvantage.

By the way, you shouldn’t try to hug a shark or wrap your hands around it but if you eventually try, it would feel somewhat soft. I know the thoughts of hugging a shark scares you, it should.

Why Don’t Sharks Have Bones?

Sharks would probably tell you that once upon a time, their ancestors had a skeletal system made of bones. Sharks are boneless creatures, not even a single bone and researchers have made it known that those ancestors that had bones were as a result of cartilages ossifying.

Other researches, however, suggests that sharks evolved from having bones to having just cartilages now which helps them to be able to survive in water.

If truly these sharks evolved from having bones to now having just cartilages, I bet they’d be glad about it. Think about their speed underwater that helps them catch prey seamlessly.

Now, sharks have no bones but cartilages; place them in the cartilaginous class of fish. Think about how they escape from predators. It’s all about the lightweight.

So, tell me, who wouldn’t want that?

The Rings on A Shark’s Backbone, What Does It Mean?

Did your neighbor go shark hunting and came back with a shark and you begin to wonder why the shark has rings on its backbone or did you try to wonder the age of the huge shark he had brought back home,; maybe you should try counting the rings on the shark’s backbone.

The rings on a shark’s backbone are how scientists tell the age of a shark. The longer the shark lives, the more bands it gets; imagine, a shark having 12 bands; depending on the species, the assumption would be that it is 12 years old. Of course, some species may deposit a single band in 2 years.

The shark’s backbone (vertebrae) contains concentric pairs of opaque and translucent bands. Scientists assign an age to a shark depending on how many bands they have on their vertebrae.

This, however, isn’t the only way to find out the age of a shark. For example, an assumption on a garland shark’s age was by looking it in the eyes See Source

Are Sharks a Vertebrate?

To answer this question, it would be pertinent to define the word ‘vertebrate’. A vertebrate qualifies as any animal with a spinal column. Check for a more elaborate definition in the Merriam Webster dictionary Merriam-Webster.

Having seen the definition of vertebrate, we now know that sharks are vertebrates because they have a spinal column just like humans. Despite the fact that sharks do not have bones, they still have a skeleton. Their skeletal system is however made of cartilages.

Their lack of bones and have of cartilages places them under the class of fish called cartilaginous fish which includes rays, skates, sawfish.

Now that we know this, we could consider why they are vertebrates when they have no bone and why you should regard them as one.

What are the Functions of a Shark’s Vertebrae?

There’s no part of the body internally or externally that doesn’t have an advantage, even for sharks. The function of vertebrae is to bear the weight placed upon the spine and also to protect and support the spinal cord. This is the main function of the vertebrae.

The neural arches form the upper cartilaginous tube; in between the vertebrae are extra layers of cartilaginous structure that covers the gaps, enabling it to envelop the spinal cord in a continuous sheath.

Meanwhile, the lower part of the tube has multiple layers of calcification. majorly, it forms an enclosure for the notochord.

If Sharks Have No Bones, How Come They Are Vertebrates?

The vertebral column is common among Cartilaginous fish (including sharks, skates, and rays), mammals, and humans. As a result, they are all vertebrates.

It is true that sharks have no bones but that doesn’t disqualify them from being considered vertebrates. The scientific classification of sharks clearly shows that they are vertebrates.

It is pertinent to note that being considered as vertebrates means just one thing, which is having a backbone otherwise called spine or spinal column. Though sharks do not have bones, they have a backbone made up of cartilages.

Scientifically, sharks are classified as Chondrichthyes (Cartilaginous fish) belonging to the Sub-Phylum Vertebrata and Phylum Chordata. The backbone of a shark consists of two tubes of cartilages; one of them covers the spinal cord.

This page clears the air for those asking questions such as “do sharks have a backbone”, “are sharks a vertebrate?”, “Why are sharks considered vertebrates?”, and other related questions.

In the end, we found out that sharks have a backbone that is made of just cartilages, no bones at all. Their cartilage places them under the class of fish known as cartilaginous fish.

And, for emphasis, sharks Have backbone! They do not have bones, per se, but their cartilage forms a vertebral column also called a spinal cord which qualifies sharks as vertebrates. Vertebrates have a backbone.