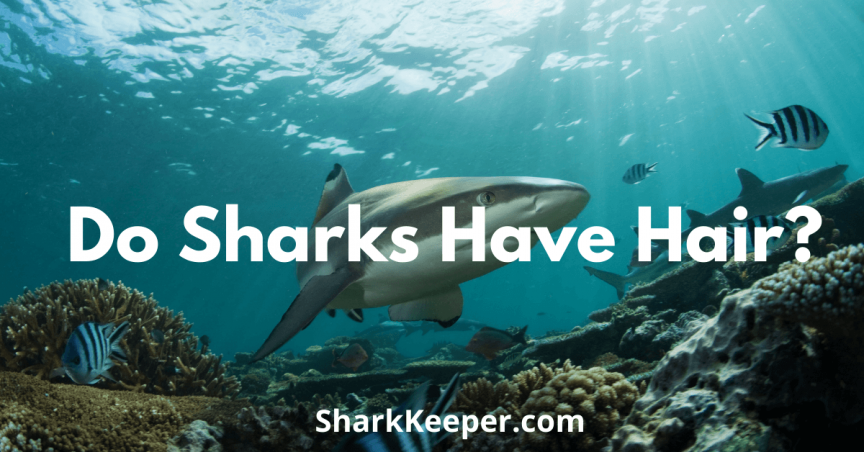 Answering the question Do sharks have hair on the body? The answer is No! Sharks are not mammals and so they do not have hair on their body. Not even a strand. Just so you know having hair is a quality of mammals that enables regulate body temperature.

Whales are mammals but sharks are not! Even if they have a quality that could have qualified them as a mammal, that alone doesn’t make them mammals.

Generally, sharks belong to the Chondrichthyes Class of fish – the cartilaginous fish.
Notwithstanding, whales do have hair but not much of it, they have hair follicles around their mouth. Also, some species have hairs before they are born.

The resemblance between them could confuse people that sharks too are mammals and therefore have hairs. Let’s now look further into why sharks don’t have hair.

Mammals are creatures that have mammary glands through which they can produce milk to feed their young. This, however, being the prominent feature of mammals doesn’t mean it alone defines mammals.

What sharks have on their body are scales that aid their swimming. They also do not take in oxygen through the lungs but through gills.

Lastly, this point totally disqualifies the shark from being called ‘Mammal’; they are also cold-blooded whilst mammals are warm-blooded.

Now, you know that some species of shark’s ability to birth young ones does not solely make them mammals as they lack the essential features of mammals.

Since Sharks Don’t Have Hairs, What Do They Have?

The scale that covers sharks’ skin look more like teeth. These are the “dermal denticles” that are special coverings on the shark’s body. Extra teeth are what a top predator would want.

It is pertinent to know what covers the body of a shark since they are not mammals, which means they do not have hairs on their body.

Sharks are ocean dwellers that need every weapon in their arsenal to fight off predators and catch prey. The shark’s skin is exactly for that, alongside its wide mouth and plenteous teeth. Some denticles are so big; the sharks use them as defensive spines and shields

The shark’s scales contribute to its ability to be able to swim very fast underwater. The denticles reduce drag and turbulence. Great white sharks are stealthy hunters, thanks to their skin. Check Source

The shark’s skin was imitated by swimsuit manufacturing companies, it was tagged ‘technology doping’ and was banned from the Olympics. These creatures are just machines swimming under the ocean; built for kill and survival is how I like to describe them.

How Do Sharks Regulate Body Temperature?

The hair on the skin of mammals helps them to be able to regulate their temperature and to adapt to various weather conditions. Sharks on the other hand do not have even a single strand of hair on its body. Makes us ponder, how then do these creatures regulate their body temperature?

Sharks are ‘cold-blooded’ animals; scientifically, they are poikilothermic. But then, the sharks that live in warm waters have ‘warm-blood’.

Some sharks are also homeothermic which means that their body temperature is slightly higher than that of the water environment.

Some sharks have the ability to raise their core body temperature above that of their surrounding in turn generating heat as they swim which is conserved by a special vascular network surrounding their muscles.

The shark’s ability to regulate its temperature helps it in being able to hunt, digest food, and travel too. The temperature determines how much energy it uses in performing these tasks.

How Thick Is the Shark Skin?

It is definitely not easy to scratch a shark; even parasites would have to go through this thick first line of defense. Sharks have very thick skin. The whale sharks have a skin that is up to 10 cm (4 inches) thick.

The scales on a shark’s skin serves to protect the skin. The dermal denticles that are the scale on the shark’s skin are arranged so that they could go one way – backward.

You could pet the shark from its head to the tail but if you come from the tail to the head, it would be rough and you could lose your hand. Contact with these scales can injure prey too.

Whale sharks have bulletproof skin, a skin that is 6 inches thick, not as thick as the skin of sperm whales but might just be thick enough to stop a bullet.

These scales allow the shark to be able to swim fast underwater that it was even imitated by swimsuit manufacturing companies. Isn’t that incredible? Ancient Greek even used a shark’s skin as sandpaper.

Do Whales Have Hair?

Whales are creatures of the ocean; at some point, some people even confused whales to be sharks but then both creatures are different. The whale shark is a shark and the largest fish in the world; still, it isn’t a whale.

The whale shark, however, has some characteristics in common with whales compared to the typical shark. It eats more like a whale; also, it is as massive as a whale.

Having stated the fact that whales and sharks are different, we should also note that sharks do not have hair but whales do. Most whales have hair when they’re born; some keep them throughout their lives.

These hairs are in places where land animals would have whiskers. The hairs are visible in some whales while in some it’s just the hair follicles that remain.

These hairs on whales could be used as sensory organs to pass messages across to each other; especially between mothers and calves.

Does Sharks Pup Have Hair?

Considering the fact, sharks do not have hair even a strand. It is the same for the pups no matter how they’re born. Put in mind that sharks aren’t mammals even though some species give birth to their young alive.

Sharks have three methods of reproduction: laying eggs (oviparity), live birth (viviparity), and some species of sharks carry the eggs in them till they hatch and might not deliver them immediately so they eat the unfertilized eggs.

Knowing that, wouldn’t this be the question, are pups like other sharks?

Sharks who birth their young live do not fend for these young. They swim off immediately after birthing. Sometimes, their momma (the female shark) takes them to the shark nursery where they are left to be on their own.

In other words, young sharks look like other sharks already, with no hairs too and they are smaller in size.

Does Dolphin Have Hair?

A dolphin is a sea mammal that possesses the typical characteristics of all mammals. Ranging from having mammary glands that helps them produce milk to feed their young to having hairs alongside others.

Dolphins have hairs around their snout when they are in the womb and for a short period after their birth. For some species of dolphins, these hairs fall off shortly after birth.

The Amazon River Dolphins live in murky waters and they would need a way to communicate and a way to navigate as eyesight might be bad when they hunt for prey. That’s what their hair does for them, helps them be able to sense in places where they cannot see.

These creatures can be of different colors depending on their age; it could be a soft, rosy pink to a vivid pink. Lastly and importantly they keep these hairs into adulthood.

This page puts in-the-know those asking questions such as “do sharks have hair?”, “since sharks do not have hair, what do they have?”, “how do sharks regulate body temperature?”, “do shark pups have hair?” and other related questions.

In the end, we now know that sharks do not have hairs, not even a strand. Whales have hairs and that confuses some that sharks too have hairs. This article, however, clears the air.

For emphasis, when we say that sharks do not have hairs, we mean all sharks. Even though they are of different species, none of them have hairs.