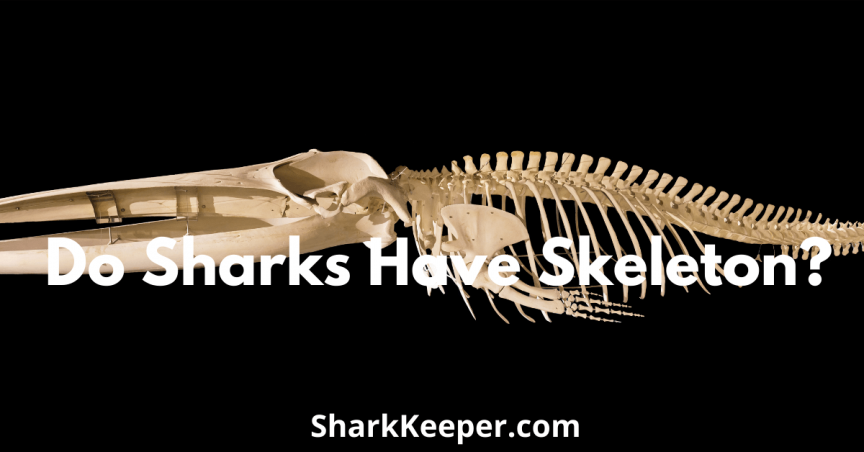 But, do sharks have skeletons? Yes, sharks have skeletons to support and give them shape. However, the sharks’ skeleton isn’t made up of bones like that of humans, it is made of cartilages and that’s why they are called Cartilaginous Fish. Sharks are vertebrates which means that they have a spinal column. Merriam-Webster gives a more elaborate definition.

Sharks are however not the only species of aquatic creatures that are cartilaginous; sawfish and rays are too.

Since sharks have skeletons but not made of bones, let’s see other facts as they relate to the shark’s skeletal system.

Does All Species of Shark Have Skeleton?

There are over three hundred species of sharks and yearly more are being discovered. Though, there are plenty of species they all are still sharks.

Based on the fact that there are different species, there must be differences but, in this case, there is unity. All species of sharks have skeletons and they do not comprise of bones but cartilages. Put in mind at all times that sharks are in the classification of cartilaginous fish.

So, when we say sharks have skeletons, we mean all sharks. Yes, all of them.

How Does the Shark’s Cartilage Benefit It?

Not like they created themselves to not have bones and rather have cartilages. Sharks do not need bones. Actually, their cartilage in place of bones is of more value to them than bones would have been.

Cartilages are much lighter than bones and sharks use this to their advantage, their large livers are full of low-density oils which in fact helps them remain buoyant. These creatures use their gills to filter oxygen from the water.

Cartilage also allows the shark to be able to swim very fast without using too much energy. Next time, when you see a shark go up to 30 miles per hour, know that is the advantage the cartilage gives the sharks.

The cartilage also allows for flexibility, allowing the shark to be able to reach for its tail to bite off something that’s getting hold of its tail giving the shark a degree of control.

Wondering why a shark can open its mouth so wide to catch and tear down a prey?

Well, it is due to the fact that these creatures have elastic bands of tissues that hold their joints together in place. The elastic tissues allow the shark to overstretch its joints without any damage.

Take it from me, the shark’s cartilaginous skeletal system is the main deal, it contributes to the buoyancy of the shark. The shark’s cartilages help in the reduction of wear and tear of the joint that could occur by bones meeting at the joint and rubbing against each other causing friction which would thereby lead to tearing.

These creatures have enough fluid that acts as a lubricant for these joints. These bags of fluids absorb shocks between the joints of their cartilages.

In all these, sharks can still fossilize even though they do not have bones; as most sharks increase in age, they begin to deposit calcium salts in their skeletal cartilage to make it stronger.

With plenteous teeth, the cartilaginous skeletal system that also the shark does all of these, what more can this apex predator ask for? These creatures are built for killing and survival.

Since Sharks Have No Bones, What Makes Up Their Skeleton?

From the birds of the sky to humans to bony fish like tuna and salmon as well as other terrestrial vertebrates. Skeletons are made up of bones but the skeletal system of a shark is different.

The shark has no bone, not even its skeleton has bones. This differentiates them from other terrestrial animals that may have a combination of both bones and cartilages.

The entire skeletal system of a shark consists of cartilages and connective tissues. As earlier stated, the cartilage is light in weight. And, when compared to bones it is about 50% density of bone. Cartilage is a flexible tissue that grows with the shark.

Is the Sharks’ Skull, Spine, and Jaws Made of Cartilage Also?

The spine and jaws perform many duties that can cause wear and tear easily and so their makeup is of calcified cartilage. The name comes from the coating of calcium salts that makes it extra rigid and firm. This doesn’t hamper on its lightweight feature but then it comes with a cost, some flexibility sacrificed for extra strength.

The skull and the snout too receive great protection from this calcified cartilage. The skull is made of denser cartilage than the other parts. This extra-rigid and firm cartilage help to protect the vital parts of the shark – the brain and the snout?

For the sharks’ snout area, there is soft, spongy cartilage. Think of this cartilage as an airbag, it helps in absorbing impact and deflecting damages.

I bet you want to know what makes the cartilages this strong, well, cartilages compose of specialized cells known as chondrocytes. These cells generate an extracellular array of collagen fibers, elastin fibers, and proteoglycan.

Are Sharks the Only Cartilaginous Fish?

Most of the world is covered by water and fish of different species and types live underwater. So, sharks are just a type of fish with over three hundred species.

Stating that, it is pertinent to note that sharks are not the only cartilaginous fish that can be found living underwaterunderwater. Lots of fish are cartilaginous too, meaning they have cartilage makeup; fish like the sawfish, rays, skates, chimeraschimeras. All these fish have plenty of species too.

There are up to an estimated 934 species of cartilaginous fish.

Another big question that pops up in the mind of a person who just found out that sharks have spinal columns made of cartilage.

Well, it is pertinent to note that just having a spinal column or being a vertebrate does not qualify an animal as a mammal. Sharks are vertebrates like mammals but they are not mammals; they are rather put in the class of vertebrates which is the Cartilaginous fish. By now, you should already know why.

This is the common qualification of mammals which has already disqualified the shark.

Sharks do not have hairs on their skin but placoid scales, also called ‘dermal denticles’ that aid their swimming. Other mammals have some sort of hair on their body to help in temperature regulation.

You might think those are enough disqualifications already but then the sharks continue to go far away from being called a mammal because like every other fish the shark takes in oxygen from the water through the use of their gills but then mammals take in oxygen through their lungs.

Why Would Someone Think Sharks are Mammals?

Some species of mammals such as platypus, spiny anteater also lay eggs like some sharks. In other words, giving birth to live young doesn’t pass as a strict or core characteristic of mammals.

So, whenever the question “are sharks mammals?” pops up on your mind again, remember this article, sharks are not mammals, they are in the group of Cartilaginous fish. So, the answer is No, they aren’t mammals.