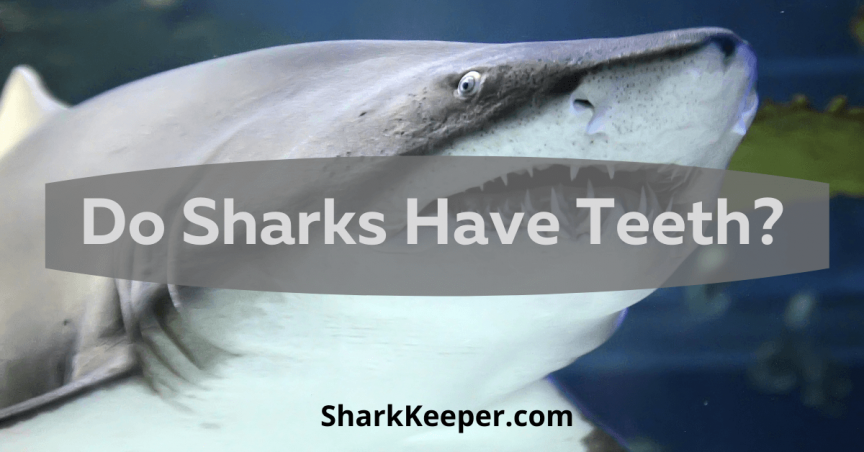 Sharks are one of the big predators that live in the ocean. These creatures tend to swallow their prey. However, you may still wonder whether they have teeth and what they do with it.

A lot of studies have come up whether sharks have teeth and the answer is YES!. Sharks have teeth but the teeth type varies. The teeth of sharks vary depending on the species of shark. Some sharks can have up to 50,000 teeth during their whole lifetime.

There are interesting facts about sharks’ teeth that you need to know. In fact, the teeth of sharks have many amazing characteristics.

How Do Sharks Grow Their Teeth?

Sharks don’t actually have the whole teeth at once. That is to say, the number of teeth they have depends on the different stages of life. Thus, sharks can have up to 300 teeth at once.

Sharks give birth to their young ones with a complete set of teeth. As a result, they start feeding themselves immediately after delivery.

The shark is one of the most feared sea animals, feared by both humans and other animals alike. It is therefore surprising to know that as strong as the shark is, its teeth are not very strong. The structure of the shark’s tooth is in a way that they can easily fall out.

Sharks are very unique in the sense that they find a way to replace their lost tooth. As a result, sharks have a distinguishing feature of shedding their teeth from time to time.

Which Shark Has the Largest Tooth?

There are various species of shark with large teeth, however, the Megalodon had the largest tooth of all sharks.

This shark was the largest shark that ever existed. Its four largest teeth ever discovered measured over 7 inches.

The types of shark teeth are basically four in number. They include:

Dense flattened: Sharks that have this type of teeth use it for crushing food. It helps in easy crushing of food. Such sharks include Angel sharks and Nurse sharks.
Needle-like teeth: These teeth are to feed on fish or other small sharks. They are easy for grasping slippery meals. Examples of sharks with such teeth are Blue sharks and Bull sharks.
Pointed lower with triangular upper teeth: These kinds of teeth are for cutting prey such as large mammals. The teeth help sharks to cut their prey into smaller pieces which will be easy to swallow.
Non-functional teeth: These kinds of teeth are not used by the sharks, they are non -functional. Sharks with non-functional teeth filter feed.

How Many Number of Teeth Do Sharks Have?

The number of teeth of a shark can vary depending on the type of shark. In the oceans, there are different types of sharks with different numbers of teeth.

For example, there is the great white shark that has 50 teeth approximately at one time. Meanwhile, some sharks can have up to 300 teeth in their different stages of life.

Some sharks’ teeth come in layers. As a result, both their upper and lower jaws can have up to 2 – 3 or as many as 15 teeth in such rows.

History has shown that sharks develop extremely strong jaws that give them a powerful bite.

At times when sharks bite into a meal, they lose their teeth. But then this is not a problem for them because they can easily replace these teeth.

What Are Sharks’ Teeth Made Of?

Many ask what the teeth of the composition of the shark’s teeth because they usually have sharp teeth that can tear their prey easily.

As sharp as the teeth of sharks are, they are made up of calcium phosphate, a very tough material.

Sharks’ teeth are usually very sharp and it is easy to cut into anything.

Did you know that not all sharks have extremely sharp and scary teeth?

The whale shark and the basking shark unlike most other sharks do not have extremely sharp and scary teeth. They have over 3,000 tiny little teeth in their mouth.

Their teeth are not used to cut or chew, instead, they serve as filters. Like humans, their teeth are covered in enamel but they are not sharp.

How Many Teeth Is A Shark Supposed to Have?

Unlike different animals that have a definite number of teeth they should have; the shark is different.

The number of teeth of shark varies depending on its species.

Are Sharks killed for their teeth?

People who kill sharks don’t do it specifically for their teeth. In fact, the part of the shark that makes people hunt them is the fin. This is because they use the fins in making shark fin soup.

On the other hand, millions of sharks die each year through bycatch. This threatens the population of sharks greatly.

Most of the time when you see a shark’s tooth, it is usually a tooth that has fallen off around the beach.

Sharks are not as harmful as they appear to be.

What Is So Special About Shark’s Teeth?

Sharks have unique jaws, unlike most animals. The jaws are not just unique, they also move. More so, sharks have one of the most powerful jaws of any animal in the world.

The type of shark’s teeth is dependent on the species and diet.

Sharks’ teeth are very popular to trade, collect, and sell. One of the most popular shark teeth which served as a weapon many years ago is the Megalodon teeth.

They also serve as tools used in carving and also tools to cut food.

The shark’s teeth were very valuable both to sharks and man.

Do Whale Sharks Have Teeth?

Whale sharks are the largest fish in the world. Surprisingly they are not whales, they are sharks.

The whale shark has rows of over 300 teeth. But, the function of their teeth is not yet since they are filter feeders. Some researchers suggest that the teeth of whale sharks are a result of an evolutionary trait.

Whale sharks have a very sharp eye and these eyes are covered in tiny teeth. These tiny teeth are called dermal denticles. They cover the whale shark’s eyeballs.

How Often Do Sharks Lose Their Teeth?

On average, sharks can lose at least one tooth each week of their life. It doesn’t really matter how many times they lose their teeth because it doesn’t take time for the teeth to grow back.

When it is due for a shark to lose its tooth, the tooth falls off on its own. Sometimes, sharks lose their teeth when biting on something, however, the tooth is already weak at that point.

Different sharks have different numbers and different rows of teeth.

There are always new teeth waiting for the other ones to fall out. The shark can grow a new tooth within 24 hours.

Brief History of the Discovery of Sharks’ Teeth

Shark teeth usually fall out. This leads to one seeing fossil teeth on the beach or riverside.

Pliny the Elder recorded the oldest fossilized shark teeth. At first, he believed that they were objects from the sky which fell to earth during lunar eclipses.

The Renaissance era also had a misconception about the triangular fossil teeth of sharks. They therefore suggested that the objects usually discovered infused in rocks were petrified dragon or snake tongues. This era referred to them as tongue stones or glossopetrae.

They believed that the glossopetrae could cleanse certain toxins and poisons. Thus, the people commonly used them for treating snake bites.

The wearing of these “tongue stones” as pendant became common to royalties and noblemen due to the belief associated to it. Or, at least it could bring some luck to them.

A correction of the misconception came in 1611. This was when Fabio Colonna an Italian naturalist described the triangular objects as ancient shark teeth. Subsequently, in 1667, Nicolaus Steno a Danish naturalist talked about the composition of the shark teeth and made some findings of a shark’s head with such teeth.

Do Sharks Have Infinite Teeth?

We, humans, have a limited number of teeth, 32 but that is not the case with that of sharks. Sharks don’t have limited teeth.

Sharks do not necessarily rely on a particular set or type of teeth. Instead, they have an endless supply of teeth.

Also, sharks have a unique dentition that does the work of generating teeth for them throughout their different stages in life.

Teeth growth in sharks differs depending on the shark and their types of diet. In some sharks, a new set of teeth develops every two weeks.

Is Shark Skin Made of Teeth?

The shark skin is not that smooth. It feels like sandpaper because it is consists of tiny teeth-like structures called placoid scales or referred to as dermal denticles.

The shark skin acts as a protective layer to the shark. Thus, the skin protects the shark from what is happening around it.

These dermal denticles are the same kind of tiny teeth that are in the shark’s eyeballs.

The scale also helps the shark to reduce friction when swimming.

Sharks use their teeth to bite off chunks from larger prey or tear the smaller prey apart. Once they cut a piece that can fit into their mouth, they go ahead to swallow.