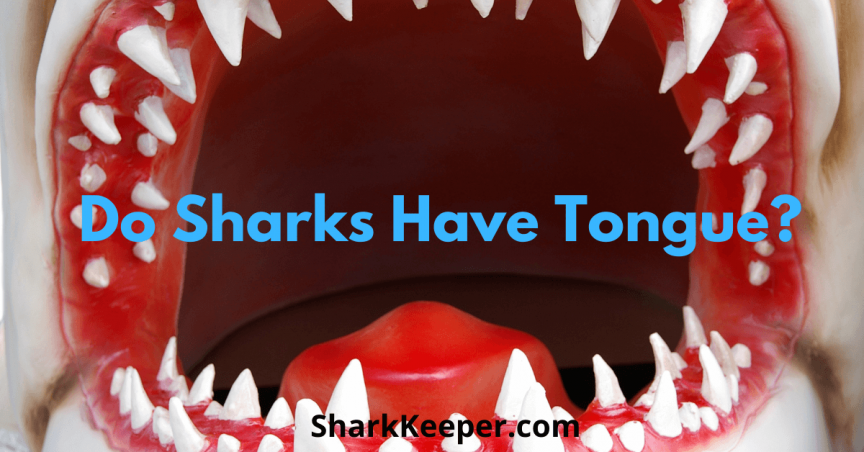 The tongue is a flexible organ in the mouth of animals that is mainly for tasting. And, the way sharks go about their feeding, preying voraciously on smaller sea animals, you would wonder if they have the time to taste. Hence, the question, “do sharks have a tongue?” The examination of whether sharks have a tongue or not is based on the perception of sharks’ taste buds.

So, do sharks have a tongue? Sharks do have tongue-like structures in their mouths. Although, these are not true tongues. They are skeletal protrusions in the mouth of sharks often referred to as a basihyal. The basihyal looks indistinctly like a tongue meanwhile it’s not a tongue.

Due to the complications of whether sharks have a tongue. I am going to highlight a brief primary knowledge of a tongue and we are going to see it from the perspective of sharks.

What are the Functions of the Tongue?

The tongue being extremely movable, it helps in moving food around the mouth while chewing, and also helps in swallowing the food particles. It aids in turning some solid food into a mash that can be swallowed. Safe to say it aids in digestion as well as making a sound.

The tongue possesses taste receptor nerves that transmit signals to the brain. These are very important when trying to differentiate many tastes and flavors which help sharks tell if it’s their choice of meal, or whether the meal is good for them.

This is just a glimpse of what a tongue is.

Do you want to find out other genuine and instinctive things a shark’s tongue can do? Of course, it would be such an interesting knowledge. Let us break down the mystery of sharks’ tongue.

Components of A Shark’s “Tongue”

The shark’s “tongue” is however not called a tongue, it’s referred to as a basihyal. This is a small thick piece of cartilage located on the bottom of a shark’s mouth.

The tongue is a muscular organ in humans; however, it doesn’t seem so in sharks. The fish tongue forms from a fold in the floor of the mouth.

The basihyal consists of a middle bone at the central point of the hyoid arch and in humans, it forms the hyoid bone. Some species of bony fish have teeth on their tongues which helps them hold prey.

Mostly, these shark tongues are non-functional. If we are to talk about the functions of a tongue, you wouldn’t easily classify the sharks’ tongue as one.

The tongues primary function is to detect taste. Also, to aid in digestion and know what’s good to eat and what’s not good.

Particularly, non-mammalian vertebrate mostly has their jaws that also shelters the teeth as their taste buds. This is definitely the sharks which clearly have multiple rows of continually regenerating teeth. The region with the absolute highest concentration of taste but in sharks is directly behind the last row of the teeth, both the lower and upper jaws.

The aforementioned sharks’ taste buds concentrating mostly on their row of teeth just suggests the important association as regards biting and tasting. Some study even reveals that taste buds were crucial in the evolution of teeth.

In studies of sharks’ teeth development, tracking the stem cell in the mouth before the teeth and taste buds developed, the cells appears to have migrated and even contribute to both structures. Even after the development of teeth and taste buds, the taste linked cells travel to the tooth and form a region deep in the jaw.

In as much as the sharks’ stem cells take absolute action on the regeneration of sharks’ teeth throughout their life. The sharks’ taste buds also share in this ability. This is to prove that the sharks’ tongue is not it’s taste bud. Also, to show that the sharks taste bud and teeth have evolutionary links and functions together.

Can Sharks Move Their Tongue?

In most sharks, the basihyal is somewhat small and immovable. But, other species have their basihyal bigger, more flattened, and movable. They also use it often to efficiently suck up prey.

Just as I highlighted earlier, the basihyal is relatively useless so it is actually pointless moving around the mouth. It is even claimed that the basihyal is not a tongue either way.

Can Sharks Stick Out Their Tongues?

The basihyal is mostly small and it doesn’t serve as a taste receptor. It really doesn’t have much work doing. The smallness of the tongue makes it relatively negative on sharks sticking out their tongues.

Functions of The Sharks’ Tongue.

No distinct function has been highlighted to the basihyal. There are exceptions actually; only 3 shark species use their tongue in a significant way. They are Cookie cutter sharks, Bullhead sharks, and Carpet sharks.

The tongue of this species of sharks is larger, more flattened, and often used to suck up prey. These sharks put their wide tongue to good use. It has the ability to use its tongue to rip out the flesh from its prey.

The Bullhead and the Carpet sharks:

These sharks add some additional muscles to move their tongues more. They can create space inside their mouth which allows the quick suck up of fish or preys.

In these sharks, their tongue in one way or another aids in feeding.

Do Some Sharks Shrug Their Shoulders to Swallow Food?

How does it work? A study was carried out with an x-ray movie observation to find out if sharks swing their shoulders internally when they eat.

In this case, the observation showed that sharks pulled their shoulder girdle back to create the suction that is needed to draw food through the back of their mouth.

These sharks are mainly bottom dwellers. Mostly they hunt on the rocky crevices, sand, or mud on the seafloor. Some even camouflage in other to blend in and deceive prey. They can open their mouth widely and quickly to suck in prey. Sometimes the muscles deep in their bodies help them create a suction that draws prey into their mouths.

Many scientists suspected that shoulder girdle plays no role in suction-feeding. Meanwhile, this study carried out with sophisticated observation tools shows that the shoulder girdle moves anytime the shark’s jaw evolves. No one is sure what structure it evolved from.

This research was carried out by Ariel Camp postdoctoral research at Brown University and colleagues too. This research will further help other scientists to answer the question of how shoulder girdle evolves in sharks and other fish. Check source.

How Do Sharks Move Food Around Their Mouth?

The shark’s pharynx is long and with that, they have to keep food moving down towards it. We can feel the usefulness of the tongue in moving food around in the mouth. These sharks don’t share the same feeling. They hereby control the motion of fluid in their mouth to manipulate food.

Although these sharks don’t chew, most times it is a deliberate intent to move the food to the back of their mouth.

Although there are complications whether sharks have a tongue or not. it is now clear that sharks don’t have tongues just like humans, they have Basihyal. The Basihyal does not perform the functions of a tongue. But there are other nerves and structures in their body that works in place of the tongue.