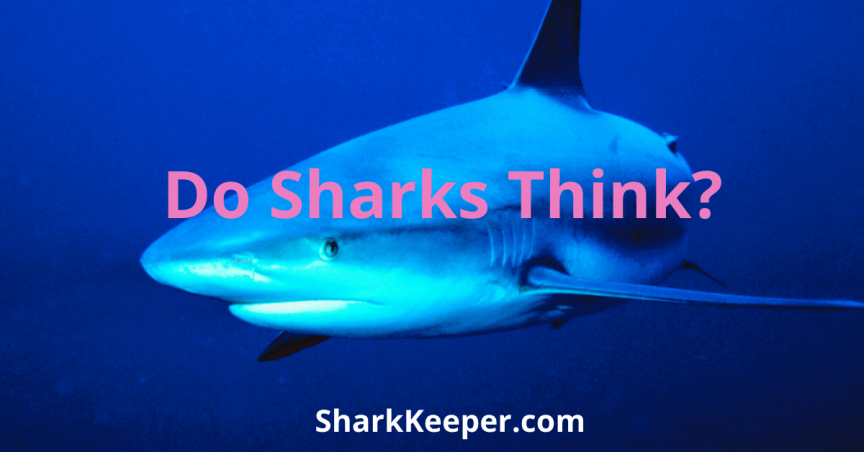 Sharks are top ocean predators, they aren’t sadistic killers like some movies, documentaries or books make them seem. The species of sharks are over three hundred and the ways they act and survive are all different, including what they eat. This leads us to the question that we’d be discussing in this article – “Do sharks think?”

Answering the question Do sharks think? This is a tricky one; sharks do not think like humans do but they have some level of intelligence.

From time immemorial, humans have always thought that sharks as well as other fishes do not have the capacity to think. They take on life as they see it with some level of intelligence.

Humans think of what to eat, what to wear, where to go, and how to live their lives in the next year or years; sharks however do not have this ability.

Birds of the air, animals of land and sea survive typically with their instinct which is a kind of natural intelligence. Sharks are no exception of creatures with this kind of intelligence.

Sharks are intelligent sea animals and they show this in their hunting preys and escaping predators in the sea as well as humans that dive in to catch them with bait.

These creatures use their senses in hunting. Some sharks can smell a drop of blood from a mile away and the eyesight of a shark although poor can still help it navigate the ocean. The hearing of a shark ranges from 10 – 80 Hertz which makes it possible for them to hear prey that is up to 800 feet away

The combination of these senses alongside their killer instincts helps the shark be able to survive in the ocean – feed and escape predators.

Do Sharks Have Feelings?

Prior to now, you probably thought that feelings are exclusive to humans only and no other creatures have feelings. By the way, pet owners who would like to add a shark to their list would want to know if sharks have feelings just like dogs and cats.

In fishes and in sharks the part of the brain that is related to feelings isn’t as developed as those of humans and some other mammals. However, sharks are a lot friendlier than we think.

Don’t judge them by their attacks on humans, those are accidental.

Also, our feelings help in our communication; sharks like some mammals, communicate with their body. This shows that these creatures aren’t just sadistic hunters but a creature with feelings. They feel pains too.

Now, we know that sharks too have feelings to one degree or another. Not yet confirmed though but they are there.

How Many Senses Does A Shark Have?

Sharks have senses that comprise of some of the human senses –smell, sight, hearing, and taste; they however have two extras aided by special receptors which are electroreceptors and lateral lines.

These senses of the shark help it to survive underwater; they are put in use to hunt prey and escape predators which are the basics of a shark’s life. Just as humans rely on their own sense to be able to survive and go about their businesses.

In hunting, the shark would mostly depend on its sense of hearing; sounds travel farther in water than in air. Shark’s hearing allows them to be able to hear the sounds made by a fish struggling afar.

Asides from the great hearing ability, they are also called “swimming noses” because of their ability to detect the smell of fishes from afar.

When someone asks, who or what is built for kill and survival? Tell them it is ‘Sharks’.

Smiling is an attribute peculiar to humans but then some mammals show expressions that seem as though they are smiling. Mammals like monkeys, dolphins, and dogs.

Some other mammals show other feelings like humans; feelings such as anger, fear, happiness. Although, it is obvious that some of these feelings are not peculiar to just mammals or the few animals I mentioned above.

A part of the shark’s brain that deals with emotions aren’t as developed as that of humans. So, sometimes sharks might look like they are smiling but they are not.

I know you must have seen movies where sharks smile at the sight of prey. Those movies just over exaggerate the gesture that looks like a smile.

Sharks cannot smile but that doesn’t stop them from communicating with their body. As earlier stated, they do not think but they have the instincts and the senses to survive and live their lives as the day comes and no matter how the water is – cold or warm.

How Do Sharks Navigate?

It is all about intelligence, the senses, and their instincts. You’d imagine how sharks and other fishes find their way in large water bodies.

They use their sniffers to be able to track where they are going and where they are coming from. A shark released facing the wrong direction can make a U-turn.

According to National Geographic, no one knows for sure how these creatures are able to navigate such large water bodies but then, there is a wild guess that they follow their sense of smell to be able to monitor odor cues or the Earth’s magnetic field.

From these reports, Great white sharks swim from Hawaii to California and a wild leopard shark was spotted about 6 miles (10 km) away from their favorite place.

The way sharks are portrayed in movies make the mere mention of the word ‘shark’ to a human, scary. Sharks are already portrayed to be this kind of creature that eats everything at sight.

Asides from the gluttonous eating nature of some sharks, sharks have the ability to also throw up their entire stomach to take away what they do not need, they could swallow their stomach back in too. Very amazing features; just amazing.

Humans are not on the shark’s menu even though we see records of shark attacks on humans and movies that show sharks swallowing humans in whole.

These creatures are just adventurous and curious ones; they’re drawn by the smell of blood, flashy colors, colorful swimsuits, or humans splashing in the water. These attacks are actually accidental.

They have more to fear from humans than we have to fear from them. Come on, Greeks once used their scales as sandpaper. Think about it.

Sleep is an important task for the body. Mammals sleep including humans; that does not mean that other creatures that are not mammals do not sleep.

In these creatures, their mode and time of sleep are different, some sleep at night like humans while some sleep in the day like bats – nocturnal creatures. You know humans too can sleep during the day.

Even creatures in the water sleep; you are thinking of how they close their eyes underwater, right. You are not alone; someone asked me the same question too.

They are many species of sharks, ranging above three hundred species; they have different ways of ‘sleep’.

Sharks do not necessarily have to close their eyes whilst they sleep, some can’t even sleep at all. For sharks, it doesn’t entirely sleep but just a period of rest. Some sharks like the nurse sharks have spiracles that force water across their gills allowing for stationary rest. Check Source

How Does the Great White Shark Hunt?

We cannot overemphasize the fact that sharks are top predators. With over three hundred species, these creatures hunt how it suits them best.

The way animals hunt shows to an extent the amount of intelligence the animal possesses, how cunny it is, and even how fast it is.

The Great white shark specializes in sneak attacks, preferring to catch their prey unawares. Sometimes they can leap completely out of the water after sneaking up on prey.

They hunt seals, sea lions, fish, squid, and sometimes their sharks. Their sense accompanied by their sleek and torpedo-shaped body makes them intelligent, skilled hunters.

Amazing findings of the shark’s intelligence, right? Anyways, this page clears the air for those asking questions like “Do sharks think?”, “Are sharks intelligent?”, “How do sharks navigate?”, “Do sharks hunt humans” and other related questions?

In the end, we now know that sharks do not think like humans do but then, that also does not write off the fact that they have sense and intelligence.

For emphasis, when we say that sharks do not think, we mean all sharks. Though, all species of shark are endowed with senses and intelligence that help them live their lives, surviving predators and hunting preys.

They also are intelligent enough to be able to communicate with their body.