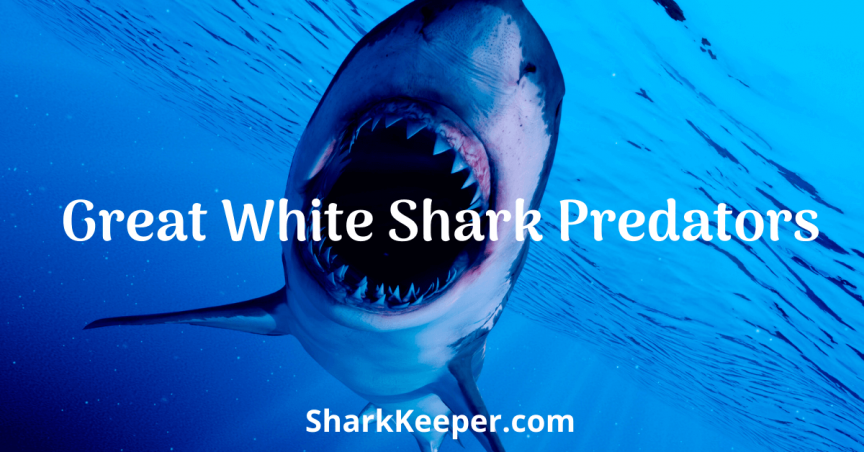 Unsurprisingly, great white sharks have predators too. Even at the top of the Ocean’s food chain, they are not free from predators.

The viciousness of the great white shark, its size coupled with its 300 sharp, triangular teeth arranged in up to seven rows makes the shark dreaded by many. To the point that the shark holds the record of the most shark attacks on humans.

Considering the size of the great white shark and its other survivability features, this shark has little to fear. Except, fear for itself and of course the killer whale and humans.

What Kills A Great White Shark?

The great white sharks are prey to orcas (killer whales) and humans. There are fewer aquatic animals that could prey on them. All thanks to their size, their body, and their set of teeth.

The shark however built for the kill, has survival kits too. The cartilaginous skeletal system of the shark allows it to swim fast away from danger or to hunt.

How could we talk about the survivability kit of great white sharks and not mention its senses. These comprises of some of the human senses – smell, sight, hearing, and taste; they however have two extras aided by special receptors which are electroreceptors and lateral lines.

The great white swims the ocean sometimes barring its teeth probably as a way of scaring possible threats and predators.

How Does A Killer Whale Kill Great Whites?

The killer whale (orcas) kills great white sharks and then makes a wound near the calorie-dense shark liver. Then, it squeezes the liver out of the shark. The killer whale leaves the rest of the corpse.

Killer whales are the apex of apex predators and that earned it the name “killer whale”. They scare great white sharks out of their space when they perceive the presence of the killer whales.

The incredible thing is that they could leave for up to a year. See source.

Think this is too much fear? Well, guess the fear helps keep them alive.

Why Are Great White Sharks Endangered?

It should not surprise you that a vicious killer and a skilled hunter of the ocean are being endangered.

The great white shark is endangered because they are being hunted by humans. This can be for various reasons ranging from meat to skin to teeth to the jaw or even for sale.

The hunting of these creatures by humans led the United States and other industrialized countries to enact protection laws. They are important in maintaining balance in the ocean.

Well, someone could bring up the fact that they hold the record of attacking humans the most. However, you should know that those attacks are mostly accidental. Great white sharks are sample biters and curious creatures. They would swim up when they see bright color swimsuits, jewelry, humans splashing water, etc.

Humans are not on the menu of great whites; they would always spit them out afterward.

How Do Great White Sharks Protect Themselves?

The great white shark protects itself from predators by camouflaging so that it would not be seen by its predators.

Sometimes, they roll their eye back into its socket when they are under threat, wonderful right? These creatures are not just for the hunting, but for survival too and they do not lack in their arsenal.

When they swim in the ocean, they bar their teeth as a way of scaring potential threats or predators. This is also necessary during competition for food.

Its body is for speed, torpedo-shaped coupled with the cartilaginous skeletal allows it to swim so fast and swiftly away from danger. Their senses are another thing that helps them navigate the ocean and even sense danger before it comes close.

Great white sharks can smell a drop of blood in 10 billion drops of water and could swim towards it. See source.

How Many Great White Sharks Are Left?

The United States and other industrialized countries have enacted laws to protect them but the law does not cover killer whales killing them or nets catching them by mistake.

According to research, the tiger and the great white shark are largely endangered. And, great whites are going to pay more dearly for it because people are more afraid of it.

Now, you ask the use of these sharks that humans hunt and kill them. Well, since the great white shark cannot survive in an aquarium, its fins then serve for medicine, and its flesh for soup.

How Does the Great White Shark Habitat Help It Control Its Predators?

Great white sharks are of the Lamnidae class of fish, which means fishes of prey, so they live in the ocean where there are enough fish for them.

Great whites live in almost all coastal and offshore waters that have water temperatures between 12 and 24 0 C (54 and 75 0 F) majorly in the United States, Chile, Japan, and Africa. The common thing about these waters is the presence of plenty fish and marine mammals.

As a matter of fact, great white sharks are adventurous species. There is no aquarium housing one because of the shark’s constant need to swim so far away, migrating vast distances.

For swimmers and potential divers, it is pertinent to know where the great white shark lives bearing in mind its way of hunting – sample biting and its record for the highest shark attack on humans.

How Long Can A Great White Shark Live?

The great white shark life expectancy rate if they do not meet untimely death by the killer whale or humans is 70 years or more. That is huge, isn’t it? Well, you can’t deny that it is.

This estimated age for great white sharks places it on the class of the longest-lived cartilaginous fishes currently known to mankind. However, they reduce in number due to continuous preying on them.

Great white sharks are for kill and survival with their body shaped like a blunt torpedo, a great tool for their hunting. The cartilaginous skeletal system also plays a part in its ability to escape dangers.

That’s some huge figures humans can only dream of.

How Does A Great White Shark Recover from Predation?

Reproduction is a major thing for animals and the great white shark is no exception in this act of reproduction.

The mating behavior of great white sharks is not clear. But, according to research, it is likely they choose a place where there are no many sharks especially males. They go to out-of-the-way places. See source

Female sharks are viviparous in nature which means they carry eggs in their womb until fertilization. Then the fertilized ones eat the unfertilized for nutrient till it’s born.

The mating process is also likely to be internal fertilization; the male shark inserts his claspers into the female’s cloaca whilst biting the female to hold her down.

Male great white sharks reach the age of maturity at 10 years of age. Meanwhile females mature at the age of 12 to 18 years. The gestation period is usually within a year before they go to give birth in subtropical waters.

We got to know that great white sharks asides from being an apex predator are prey to the apex of apex predators – orcas (killer whales).

Then, you can see that great white sharks are endangered species of sharks close to total extinction. And like every other shark, they do not have humans on the menu even though they sample bite.