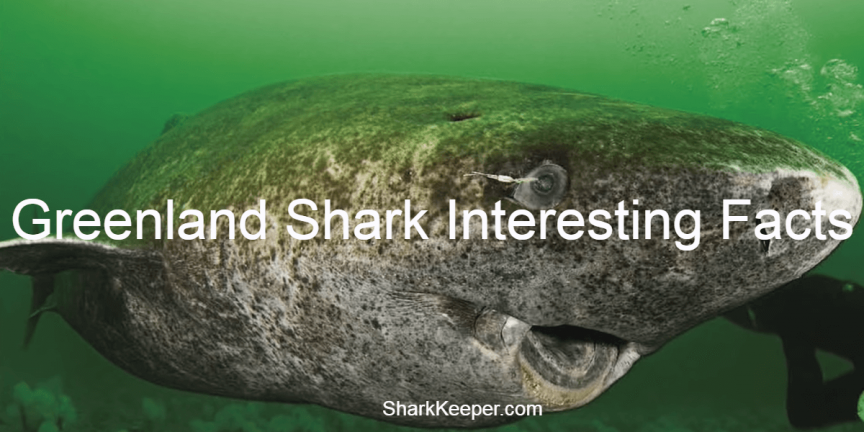 The Greenland shark (Somniosus microcephalus) is a large shark with a strange look. Of course, the type that will make you want to know more about it. This shark is one of those mysterious species that much is not known about its lifestyle.

Other common names of this shark include gurry shark, gray shark, and other native names. The Greenland shark is of the family Somniosidae commonly referred to as the “sleeper sharks”. Its notable characteristics are sluggishness which probably is the reason for its extended lifespan estimated between 272 – 512 years. And, that is the longest of any known vertebrate.

Living mostly in the depth of oceans, Greenland sharks occur particularly in the Arctic Ocean and North Atlantic Ocean. The depth at which they live shows their preference for colder waters. Also, they are rarely seen and only caught as by-catch or target species using deepwater fishing techniques such as trawling.

Chances are this shark grows larger, this is because they are thought to keep growing through their lives, unlike most other animals that stop growing at a point. Greenland sharks have a growth rate of about 1cm per year.

The Greenland shark species have a thick body with a short, rounded snout. Their eyes are rather small with large spiracles located behind. In this shark, the pectoral and dorsal fins are very small compared to the size of their body. Although, the tail fin is quite large.

Also, the gill slits are small for a shark of such size. Greenland sharks are usually pale grey to blackish-brown in color. This color uniformly distributes through their body, however, there are occasional whitish spots or dark stripes observed on their backside.

The teeth in the upper jaw of the Greenland shark are thin and pointed with no serrations and are 48 – 52 in number. During feeding, the shark uses the upper jaw teeth to anchor to the flesh of the prey, while the lower jaw teeth cut out large chunks of flesh. Also, this shark makes use of the rolling motion of its jaws when feeding on large carcasses.

The teeth of the lower jaw are broad, square with short smooth cusps pointing outwards. These teeth are also 48 – 52 in number and interlocking. The two halves of the lower teeth are firmly fixed in opposite directions.

Adaptations of the Greenland Shark

Like a shark that inhabits great depths, the Greenland shark has many characteristics that help it to survive. These adaptations include both physiological and anatomical. Thus,

This shark just like other Elasmobranchii has a high concentration of urea and trimethylamine oxide in their tissue. These are nitrogenous waste that helps them maintain an increased buoyancy as well as serve as osmoprotectants. Thus, as urea functions to achieve a balance between water and salt concentrations within the body, it also has the tendency to destabilize the protein build-up. This is where the trimethylamine oxide comes in to counteract the urea tendency of destabilizing protein. Another benefit of the trimethylamine and urea is to act as an antifreeze.

Greenland sharks have a great sense of smell. Of course, there is a need to develop another sense that is not the sense of sight by these sharks. They have parasite attaching to their eyes making them almost blind. More so, the depth of the ocean which they inhabit lacks any visible light. Hence, their excellent sense of smell helps them seek out prey and carrion which they feed on.

Behind the eyes of Greenland sharks are large spiracles that allow them to get oxygen from the water as they swim slowly conserving energy. These holes are more like vestigial gill slits and are larger in this species than other sharks.

Dermal denticles are covering this shark’s body just like it is in other species. These are tooth-like projections on the shark’s entire body that helps to reduce drag as it is swimming. And, contrary to what you may assume, these projections reduce turbulence more than smooth skin.

Other anatomical adaptations are common characteristics of fishes living in the sea. Thus, there are the fins for swimming, gills for breathing, streamlined shape, and a heterocercal (upper lobe is larger than the lower lobe) tail fin. The shape of the tail fin helps the shark stay afloat while swimming since they do not have swim bladder for maintaining buoyancy.

The Greenland shark is ectothermic and lives deep down in the ocean just above the freezing environment. As a result, this shark has very slow swim speed and low tail-beat frequency for its size among other fish species. The slowness is likely the reason for this shark’s slow metabolism and a very long lifespan.

Greenland sharks have the fastest swimming speed of 1.6 miles-per-hour (2.6 km/h), but on average, they will swim only at 0.76 miles-per-hour (1.22 km/h). Since seals cruise at double the maximum speed of the Greenland shark, researchers are still not sure how this shark is able to prey on seals which are faster. Though, there is speculation that they ambush sleeping seals.

This shark engages in yearly migration based on temperature and depth rather than location and distance. Nevertheless, some do travel occasionally. In winter seasons, Greenland sharks swim in groups toward the shallow water up north seeking warmth. But, during summer, they go their separate ways to deep waters or even farther south.

There are also records of vertical migration of these species between shallower and deeper waters on a daily basis.

For Greenland sharks, much is not known about the hunting behaviors and techniques due to lack of observation opportunities. However, they are clearly apex predators with fish making the most part of their diet. Fish prey recorded in this shark’s diet includes smaller sharks, lumpfish, wolffish, rosefish, herring, cod, eels, capelin, skate, flounder, and Arctic char.

Also, remains of seals, moose, reindeer, and bears have been found in their stomach. This shark scavenges, as such smells of decaying meat in the water attracts them. Due to the wide range of food materials found in the stomach of this shark, they are thought to be ambush predators that feed opportunistically on almost anything they encounter.

This shark species do not have any major threat at all due to their large size. Though, there are two reports of a sperm whale found feeding on this shark off the coast of Canada. This is believed to be an individual sperm whale that chose this species particularly, as a result of worn-out teeth from dealing with abrasive shark skin.

Most Greenland sharks have a parasite that attaches to their eyes. This parasite is the copepod Ommatokoita elongata related to lobsters and crabs but has a miniature size due to its parasitic nature. As the shark swims, this parasite tows backward making the shark blind, but this has very little effect on the Greenland shark. Thus, the shark can still differentiate the light and dark, moreover, the depth which they live in is predominantly dark.

There are speculations that this parasite exhibits bioluminescence which attracts preys to the shark in a bid for mutualism, but this claim is not yet verified. As such, the copepod remains a parasite and nothing more.

The Greenland shark is an ovoviviparous species, therefore, it retains its eggs within its uterus until delivery. This shark delivers about 10 pups per litter under normal conditions. These pups at birth measures around 15 – 17 inches (38 – 42 cm) in length. They have an unknown gestation period, and they are believed to reach sexual maturity at about 150 years of age.

There are no cases of attacks on humans by the Greenland shark yet verified. This is because of the depths and frigid waters this shark inhabits. However, the size of this shark means they could easily consume a human swimmer, but not yet.

When treated adequately, the flesh of this shark can serve as food. The treatment involves boiling while changing the water several times, burying under gravels for weeks, then drying for several months up to 4 – 5 months. After the treatment, a traditional Iceland delicacy known as Hakari emerges.

This whole process only makes the meat safe to eat nothing more. The taste as described by those who have eaten it creates that image of utterly disgusting meat. Much worse is the smell, as if soaked in urine. This meat is becoming less commonly eaten by the local people of Iceland due to variety resulting from importation.

Why Treating the Meat Before Consumption?

The meat of the Greenland shark is toxic due to the high concentration of trimethylamine oxide (TMAO) present in the body. Therefore, eating the meat without prior treatment causes the trimethylamine oxide to metabolize into trimethylamine which produces an effect similar to extreme drunkenness. This also affects sled dogs that feed on the flesh to the extent they could not stand after ingesting it, and sometimes may lead to death if a large quantity is consumed.

The Pacific sleeper shark produces similar toxic effect when consumed, but does not apply to most other shark species.

The Greenland shark (Somniosus microcephalus) has a history of heavy fishing targeted by shark liver fisheries in Greenland, Norway, and Iceland waters. This increased notably until the recent stopping of commercial fishing of Greenland sharks for liver oil. This species is still taken as bycatch by various fisheries.

Although the population size and trend of this species are not known, the fishing history may have had a significant impact on their population. Thus, the IUCN listed the Greenland shark as “Near Threatened (NT)”.

1. The Living Vertebrate with the Longest Lifespan

Greenland sharks have the longest lifespan of all vertebrates. Thus, this shark can live up to 272 – 512 years as estimated by researchers.

2. Among the Largest Shark Species

With an average growth size of up to 15 feet and the fact that the Greenland shark grows throughout its life, it is among the largest living sharks.

3. The Flesh of Greenland Sharks is Toxic

Containing a high concentration of trimethylamine oxide, the flesh of this shark if consumed without pretreatment causes effects like extreme alcoholic intoxication. As a result, proper preparation is done before consumption.

4. Feeds on Anything it Encounters

Greenland sharks are not picky eaters, as such feeds on almost anything on their way both living and dead. They hunt for prey as well as scavenge.

5. Greenland Sharks are Hosts to the Parasite Ommatokoita elongata

This is a 2-inch long parasite attaching itself to the eyes of a good number of Greenland shark species. Their presence, however, has little effect on the shark because even the depth at which the shark lives is mostly dark hence vision not needed.

To substitute for its blindness caused by the parasite and prevalent darkness in its habitat, the Greenland shark uses its well-developed sense of smell to track prey and rotting meat to scavenge upon.

7. The Teeth are Unusual

The Greenland shark has an unusual set of teeth with the teeth in the upper jaw thin and pointed without serrations, and adapted for anchoring into the flesh of the prey. While the teeth in the lower jaw are square broad, and interlocking with smooth outward-pointing cusps adapted for cutting flesh.

8. It Has the Lowest Swim Speed and Tail Beat Count

Of its size across all fish species, the Greenland shark has the lowest swim speed with a maximum speed of 1.6 miles-per-hour (2.6 km/hr). Of course, this shark is sluggish wish likely correlates with its very slow metabolism and long lifespan.

9. The Greenland Shark Has No Confirmed Case of Human Attacks

This shark rarely encounters humans due to the depth it prefers to live in. As a result, no case of shark attacks on humans by this species has been verified.

10. Greenland Shark is Currently Assessed as “Near Threatened”

Following the impact of shark oil fisheries on the population of this species in the past, the IUCN assessed it as Near Threatened.

The Greenland shark is one of the species without much information, thus, it has many unsolved mysteries surrounding it.