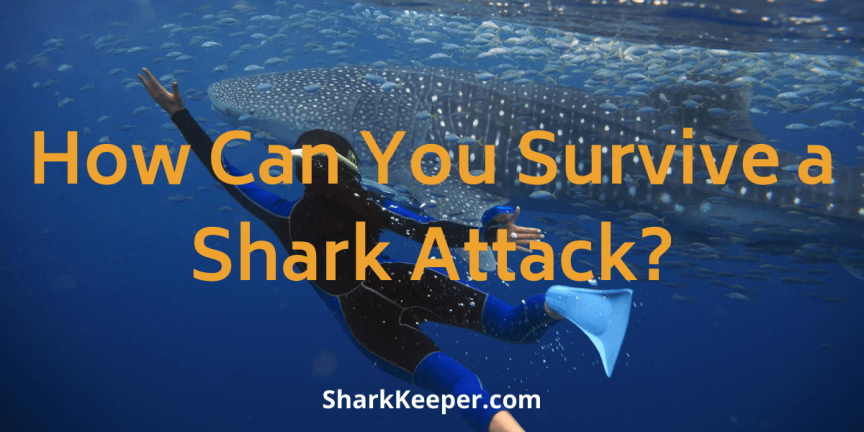 While sharks lurk in the waters we visit for various purposes, it is okay to think of how you can survive a shark attack just in case. Of course, most of us already have this default mindset that sharks are dangerous. While these creatures may not see humans as food, they can still bite us out of curiosity.

If you want to stay safe from sharks, the best thing to do is to avoid shark habitats. However, if by mistake or in any way you find yourself in water with sharks swimming around, there are ways to avoid being attacked. The first thing to do is to stay strong. Always keep your eyes fixed to the shark and be ready to defend yourself by fighting back if the shark lunges toward you. There are also things you must not do in the presence of sharks such as playing dead.

As you now know, shark experts listed several ways including things to do and not do to stay safe from sharks. And, when in the position of being attacked by a shark (which is most unlikely), how to survive.

While it is important to learn how to fight off a shark during an attack, preventing an attack is more important. Even while you go in search of sharks, you can still prevent being attacked. Hence, let’s talk about ways of preventing a shark attack first.

1. Know the Water You are About Swimming

Before entering any water, know that some parts of the sea are not the best to swim. This is because you are more likely to encounter sharks in such areas. Avoid river mouths, estuaries most especially.

Bull sharks, tiger sharks, and great white sharks with the greatest number of attacks on humans swim the estuaries mostly. There are so many shark attacks recorded in river mouths where silt and other materials usually suspended on the water surface as a result of human activities.

Even freshwaters are not safe from sharks. The Bull shark large and dangerous is popular for its ability to swim up rivers moving far inland.

Knowing the water you intend swimming involves looking out for the following:

Usually, if you get to coastal areas with recent shark sightings, there would be warnings in the form of posts to alert visitors. However, where there are no such warnings, the locals would most likely warn you verbally.

In any case, heed the warnings and stay out for safety.

Between Sandbars and Steep Drop-offs

Talk about sharks’ favorite hunting locations, these places must not be left out. So, be careful with these zones and stay away.

Watch out for any sign of fishing activity in the water you intend to enter. Fishing baits and discarded fishes attract sharks. They may also attempt to steal catch off fishermen.

As a result, staying safe is staying out of the water where fishing activity is going on. Also, look out for seabirds. If they are swooping down to the water, your guess is good there is possibly feeding as a result of ongoing fishing activity.

Sharks are most likely attracted to waters contaminated with effluents and sewage. You should naturally avoid such places for your health. Now, sharks are another reason.

2. Learn About Sharks and What to Expect

Sharks are not overall dangerous to humans. Most shark species would not attack humans. However, there are three notorious shark species with the greatest number of attacks on humans. They include the tiger shark, the great white shark, and the bull shark.

These sharks inhabit coastal waters throughout the world. Try to avoid them, as they are the most aggressive of all sharks. Whenever you notice or see that these sharks are present in the water, avoid the water.

There is also the oceanic whitetip shark that is aggressive. But this species prefers the open ocean, though may come toward the inshore.

It is good to know about sharks and their level of aggression to act accordingly when we meet one. Being able to detect the species of shark you are dealing with makes it easier to prevent an attack.

Before an attack, sharks tend to exhibit a change in behavior. Sharks swimming slowly and smoothly does not suggest any danger. However, if they suddenly start swimming faster in a zig-zag motion, arching their back, and pointing the pectoral fins downward, this most likely suggests an attack.

At this point, prepare to defend yourself. Detecting this on time will help you prepare for escape.

3. Be Ready If You Must Enter Water Suspected to Harbor Sharks

When you enter the water, you can’t tell what you may encounter. Hence, the need to always be ready. There are certain things you need to observe to ensure your readiness. They include:

Normally, divers would go with a dull wetsuit or swimsuit. Always keep it that way. There is no need to look colorful as this may attract sharks.

Avoid using things that can reflect light such as jewelry because sharks may mistake the reflection like that of a fish’s scale. Instead of exposing your watch, cover it with your wetsuit cuffs for the same reason.

Cover yourself well and do not expose parts of your body. Life jackets usually come in bright yellow and orange colors. This is so that rescuers can spot you easily. However, they can attract sharks.

Therefore, if you are not in the open sea where this may be extremely useful for rescuers to come for you. Then, better keep them away.

Take a Weapon Along

A spear-gun is a good weapon to carry when swimming in waters you are likely to encounter sharks. The essence of carrying a weapon is not to provoke a shark. Most times these sharks feel indifferent in human presence. In this case, there is no need to use the weapon.

But, if the shark launches an attack on you, the weapon can go a long way to keep it off.

4. Swim in an Appropriate Manner

The way you swim can also determine your safety from sharks. Try to swim in a rather smooth manner instead of splashing water. Even when in the presence of sharks resist the urge to make sudden movements.

Moving shakily will only suggest panic and may present you as wounded to the sharks. None of these will yield a good result.

You also need to be vigilant and cautious while diving the ocean. Whenever you see a shark, keep it in sight until you are sure you’re safe from it.

If possible, swim in a group. A group of divers is safer than a single individual. There is a lower chance for sharks to attack a group. Even if an attack happens help is right there. Moreover, with a group, extra eyes are observing the sharks for a change in behavior.

Do not go diving with an open wound. Blood in the water can attract to you. The same applies when you urinate in the water. If you truly want to stay safe from sharks, heed this advice.

6. Observe Safe Timing Before Going for a Dive

Sharks’ most active hunting periods are at night, dusk, and dawn. They hunt for prey actively at these times. It is advisable to stay away from the waters at the periods mentioned.

Also, overcast days make the weather of the sea appear as dawn or dusk. Sharks will emerge to feed. Hence, going into shark prone waters during this condition is a bad idea.

In case you are in the water and suddenly a shark attacks you, here are what you should do to ensure your survival. These are tactics from experts based on the study of sharks’ behavior. Note that seeing a shark doesn’t mean you are under attack as most sharks would just swim away on their own. However, if the shark persists, then do the following:

1. Prepare to Defend Yourself

A good defensive position is one in which you can see the shark’s movement. If you are near the shore, descending to find a reef or rock to gain cover is a good practice. You can as well back against a rock to maintain a view of the shark from one direction.

If there are other divers around, keep your back against each other. By so doing, you can maintain a view of the shark from any direction and defend accordingly.

It may not favor you when you try to swim away from the shark. You simply cannot out-swim a shark. Except of course if you are sure to get to the land before the shark could get to you.

Remember, avoid backing a shark, or show signs of panic. Also, do not block its path when it is moving.

When a shark attacks you, stay strong and fight back. This is where your weapon comes handy. Targeting the eyes, gills or snout will make the shark swim away. These are likely the only weak points of a shark.

A shark is likely to win a fight with humans, but you are not fighting to win. Your goal is to make the shark see you as a potential threat. If this happens, the shark will retreat giving you room to escape.

A speargun can cause adequate pain to the shark that can make it retreat. If you prepared for swimming, you should have this.

In case you do not have any worthy weapon, do not worry, you can improvise. Use any hard object you can find around you. A rock or your camera if you have one can be very vital. Use it to hit the shark on weak points.

Where you are with no potential weapon, fight with your fists, knees, feet, and elbow. Throw punches targeting the eyes, gills, and snout.

Gloves are important here since the skin of sharks is rough. Always go to diving with gloves on not minding what you’ve heard about SCUBA diving and banning of gloves.

If the shark refuses to retreat, keep fighting. Continue hitting it at the target points until it swims away letting you go.

Once the shark swims away, swim as quickly as possible to safety. Either get to the boat or to the shore depending on whether you are in the open ocean or near shore.

A shark can always return to further the attack. So, you are only safe when you are out of the water.

While swimming out of the water, do it as smoothly as possible. The splashing of water can attract the attention of the shark back. Moreover, if you sustained an injury it can lead to the spread of blood possibly attracting more sharks.

Medical care is very important once you are out of the water. You do not have to sustain physical injury before you seek medical help. Just check that everything is fine with you.

When bitten, try to stop bleeding first. Remain calm to prevent rapid pumping of blood. There are chances of huge blood loss depending on the severity of the injury. If a qualified medical practitioner confirms everything alright, then you can go.

It is a great idea to have a plan on how to survive a shark attack when you are likely to encounter sharks. Although, it is very rare to see sharks attacking humans. Shark zones even serve as ecotourism center for shark diving.

Divers even hand-feed these creatures to show that they aren’t the blood-thirsty monsters we see them as. However, these are large predators we must not forget. Their attacks can be fatal, hence, the need to be prepared for anything!