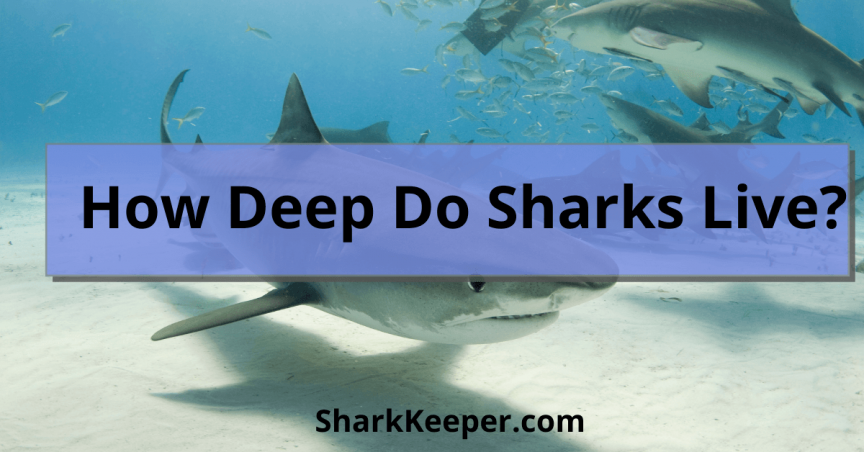 If sharks live in the ocean, then how deep do sharks live? Maybe, you have heard tales of sharks in coastal areas. Also, deep divers encountering sharks. And, you want to know the precise depth you can say that’s where they live.

Are there missing bits to what you know? You heard right. Sharks move and dove a lot. They aren’t so territorial. And the mass of waters is no barrier to their movement. How deep they live is solely dependent on species and needs at a point in time. Sharks in general can live between the depth of 500 – 9000 feet (152 – 2743 m). And, around coastal areas continental shelves and far offshore deep in the open ocean.

For instance, while bull sharks dwell mostly in coastal areas at a depth of 150 m (490 ft). And, hold the record for most coastal area attacks. Greenland sharks, also among the largest can occur as far down as 7000 feet. Even down to the seafloor.

Having known all these, what depth of the ocean can sharks inhabit for them to be called deep or shallow dwellers? Is there ocean depth where sharks can’t be found? What is the deepest shark? Or, you want to know the depth your singular favorite shark can be found. Read on as we shed more light on every single of them.

What Depth of The Ocean Can Shark Live to Be Considered Deep or Shallow Dweller?

What Is the Deepest Shark?

Are There Depth of The Ocean Where Sharks Can’t Be Found?

If you think sharks are everywhere in the ocean, then you might be wrong. Recent studies suggest that beyond 3100 m (10,000 ft), there might be no sharks to replete our wonderful resource if we deplete them.

Beyond bathyal zone, down to the abyssal plains, into hadopelagic depths of the midnight zone, there are no sharks. You may however think of the Portuguese dogfish shark, you should know that this species is near extinction.

How Deep Do Whale Sharks Live?

Whale sharks live within the offshore and inshore areas of tropical and temperate waters. But, sharks do move around always. Thus, you cannot say they have a static abode. But can only understand they spend more of their time in certain areas of the ocean. At a specific time of the day.

Whale sharks in open oceans dive deeper during day time and reach the surface at night. It is vice versa for those in the inshore region. While they spend more of their time at a depth of 10m near the surface.

Great white sharks love to visit coastal areas and the surface because it is rich with prey. However, they live far offshore and pay a visit from there. While they spend almost half of their time at a depth of 182 – 249 m (600 – 820 feet).

How Deep Do Tiger Sharks Live?

There are reported depths of 900 m (3000 ft). It is an uncommon case. Also, they cruise between epipelagic and mesopelagic ocean depths.

How Deep Do Hammerhead Sharks Live?

Great hammerhead sharks live at a mesopelagic depth of 984feet (300 m). They also cruise towards the surface. And into coastal areas of between 2 – 80 m (6 – 260 ft). In that case, they are found mainly around continental shelves, island terraces, etc.

How Deep Do Bull Sharks Live?

Bull sharks live mainly near inshore areas of warm oceans. Exactly why they are notorious for most coastal area attacks.

They are normally found at a depth of 150 m (490 ft). This falls within the epipelagic depth of the sunlight zone of the ocean.

How Deep Do Mako Sharks Live?

The short fin mako shark is the fastest shark. They live far offshore inside temperate or tropical deep waters. This is at a depth of 500 m (1640 ft).

They do reach the ocean surface making use of their exceptional jumping skills. This is known as breaching. They live around the mesopelagic depth of the zone.

How Deep Do Basking Sharks Live?

Basking shark’s existence veers between inshore and offshore temperate water areas. They get close to the surface in summer to bask in the warmth of the sun. In this case, they can reach 80m (262 ft).

The highest recorded depth is 1264 m (4146 ft). This feat was achieved by a female across the Atlantic. They live around the epipelagic and mesopelagic depths of the ocean.

How Deep Do Lemon Sharks Live?

Lemon sharks live in tropical inshore waters. At a moderately shallow depth of 90 m (295 feet). Also, they are found around mangroves, enclosed bays, etc. Like bull sharks, they live within the epipelagic depth of the sunlight zone.

How Deep Do Goblin Sharks Live?

This queer-looking guy spends their time between the epipelagic and mesopelagic depths of the ocean. However, they come up to the sunlight zone at night.

Goblin sharks can live very deep down to 1300 m (4625 ft). They are known as bottom dwellers. And spend most of their lives in darkness.

How Deep Do Greenland Sharks Live?

Greenland sharks prefer to live at a bathypelagic depth of the midnight zone. At a depth of 2200 m (7217 feet). They are found in the very cold habitat. And can cruise anywhere between the top and bottom of the ocean.

How Deep Do Frilled Sharks Live?

They uncommonly dive down to 1570 m (5150 ft). They are mesopelagic species that occasionally get near the epipelagic ocean surface.

However, they return to the surface at night at a depth of 100 m (330 ft) to feed. They are bathyal zone species that visit the epipelagic zone to feed.

How Deep Do Cookiecutter Sharks Live?

They have been recorded to also move deeper down to the bathyal zone of 3500 m (11482 ft). They live between the mesopelagic and bathypelagic depths of the ocean.

Our end goal is to shed light on how deep sharks live. Reading through you will find out that there are sharks that prefer the surface. While some are bottom dwellers. And, sharks’ diving habits vary especially when they do so in search of food. Also, according to a specific time of the day.

We also identified the Portuguese dogfish shark as the deepest shark. At a recorded depth of 3600 m.

Most middle belt and some bottom-dwelling sharks get to the surface or the coast to feed. This is because it is prey rich. At the bottom, there is always little or no food for them. This is except for scavengers amongst them.