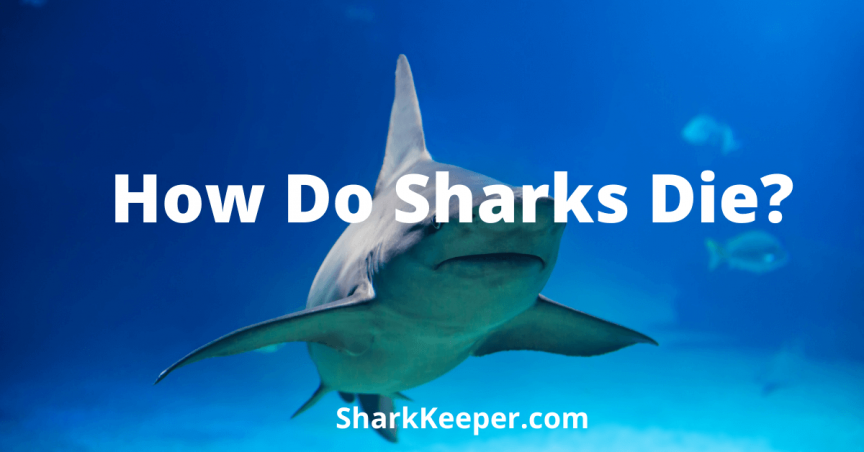 Sharks have been in existence for 450 million years. This is to say, they tend to survive pretty much everything mother nature throws at them. These sea predators, however, look to face a bigger problem which may seem to be an increase in mortality rate.

How do sharks die? Research indicates that over 100 million sharks are dying each year. Mostly killed by humans and then some die by natural cause. The others die as prey for other sea predators. Also, some others that can’t captivity are suicidal while in tanks. In all, it is clear that sharks die more of an external cause than a natural cause.

Although these sea predators may seem frightful, they are also hunting targets. The death of sharks increased in recent times. Hence, we could talk of more ways that sharks die.

Research stated that sharks mostly die in the hands of humans. Sometimes these practices are done in secret, especially in areas where shark hunting is illegal.

Man has been the greatest threat to the sharks’ population. Thus, humans hunt sharks for food, decoration, and sometimes drugs.

Let’s therefore, see how sharks die mostly in the hands of humans.

How Do Sharks Die in the Hands of Humans?

One of the major ways that humans kill sharks is:

Shark finning is responsible for over 100 million shark kills per year. This practice is mostly illegal and unregulated. Hence, some take place in deep oceans without the knowledge of appropriate authorities.

This makes some of the illegal shark fishing unreported and unaccounted for. Over 181 shark species are in danger of extinction due to the illegal killing of sharks.

Sharks’ fin has a very high value more than the shark meat. Thus, the increased demand for sharks’ fin encourages fishermen to engage in such wasteful and reprehensible act. This act generally leads to a decrease in the number of sharks in the oceans.

The shark fin trade is global. However, several restrictions are on the ground in many countries to curb this act.

Some regulation terms require to arrive at the ocean docks with the severed shark fin, on a proposed body to fin ratio.

Sharks fins traded as a dried product don’t have proper documentation of where the shark was captured or the species in question, or if it was harvested legally. That is, once the shark fins are in the market, no one can account for it anymore.

Any shark fin is a marketable commodity. However, some species have more price value than others. The shark species threatened most by sharks finning is the Whale shark and the Basking shark. Their large fins usually serve as decoration at restaurants.

On the other hand, the most commonly traded shark species is the Blue shark. There is an estimated 20 million kills annually for the fins of this shark species.

In Asian countries, shark fin soup is a primary dish. Though, consumption is witnessing a significant increase in western societies with affluent consumers, Asian and non-Asian.

The shark fin soup is mostly associated with the Asian cultural celebration.

Though the shark conservation regulation might look like an attack on the Asian culture. It is, however, to maintain longevity and reduce the risk of extinction of many shark species.

Will a Shark Die Outside of the Water?

Just like every other animal, when sharks fail to get oxygen, they suffocate and die. And, this just happens to sharks when they are out of the water.

Another reason why sharks die outside the water is due to the degradation of their internal organs.

Sharks skeleton is made of cartilage which is flexible, and they don’t have ribs. This means that when they are on the dry land, they may crush their organs. In larger species, organ destruction can cause internal bleeding and which might lead to death.

Also, another rare problem sharks can face staying out of water is fatigue. They can sink to the bottom of the ocean after a long struggle and fight. Of certain, sharks are negatively buoyant.

How Long Can Sharks Stay Outside the Water Before Dying?

The amount of time a shark can live outside of the water depends on the species of the shark and the energy it expended. It can actually be a few minutes or an hour.

Some individuals die after being placed back in the water. In this case, you wouldn’t say they stayed alive.

When sharks are left ashore or outside the water, they struggle to get back into the water. During this hustle for water, their body releases stress hormones just like humans (i.e. cortisol).

These hormones can cause blood sugar levels to rise after an extended time trying to fight or find its way back. It can take hours for the blood chemistry to get better again if it can. The sharks wind up dead at times.

A gill is a breathing organ of fish. Thus, it provides surface areas for gaseous exchange. In water, the frill extends and in the air, it sticks to the surface.

This reduces the intake of oxygen and the expelling of carbon dioxide causing brain damage and eventually lead to death.

Sharks can survive for quite a while outside the water due to their hardiness. However, they face much danger of staying outside water and struggling to survive. Therefore, they should just remain in the water.

Do Sharks Die of Old Age?

Yes, sharks do die of old age. However, these sea predators don’t just fall over and die because they are old. They die of old age in the sense that they gradually lose faculties to a point they can no longer cope with.

This means that they may stop feeding, their organs might become weak, hence they suffer from organ failure. Humans possess the capability to take care of their elders. But, in sharks, the case is different.

Old sharks suffer from many ailments such as old humans. When sharks get really old, they lose their ability to hunt and fight off predators. At this stage they get weak, they may starve and die or maybe get sick and die.

Sharks don’t have the social structure that promotes the longevity of weakened individuals. They can suffer from sickness like loss of vision/hearing, joint issues, weakened immune system, etc.

So, old age really makes sharks less competitive to a point that they might weaken and eventually die. Predators may even attack some of them, and feed on them.

Generally, there are signs that sharks are getting old. it’s quite possible to tell how old a shark is by looking at its growth layers.

These growth layers are deposited in the calcified parts of their vertebra or fins spines. Other terms are put into considerations too, such as movement, body mass, and their eyes.

Does Shark Eat Other Sharks?

Sharks are sea predators. They basically prey on smaller sea animals for food. This entails that bigger sharks feast on other smaller animals.

There have been cases of shark cannibalism in sand tiger sharks. An example is an incident recorded in Seoul’s COEX Aquarium.

Some shark species practice embryonic cannibalism. This is the egg-eating practice known as Oophagy. This is practically the embryo feeding on eggs produced by the ovary inside the mother’s uterus.

Some sharks practice intrauterine predation. In viviparous sharks, the stronger and larger animals in their early stage of development feed on other lesser womb mates.

Basically, the predatory lifestyle of some sharks starts from the womb. Feeding on another embryo in the stomach may lead to making a particular embryo larger. Hereby making it fit to tackle other predatory stages.

Do Sharks Abort their Babies?

There have been cases of pregnant sharks aborting their babies while in captivity. Most times, when captive sharks lose their pregnancy, there is usually no record. Other times, the aquarium does not understand what is going on, hence misinterpreting it.

To conserve and increase the population of sharks in the ocean, there are fishing restrictions on pregnant or nursing sharks.

Meanwhile captive induced abortion does not occur in all sharks. Due to the appearance of sharks, it is hard to tell which will lose their young ones while in captivity.

Do Shark Die Of Natural Cause?

Sharks die of natural causes. These creatures are living things; therefore, they can get diseases too and die of it.

Most people wonder why most sharks observed in the sea appear healthy and actively hunting for prey. Of course, there should be sick ones among them.

But, observations from industrial remotely operated vehicle video surveys of the seafloor showed carcasses of sharks. And, scavengers were feeding off these dead sharks.

This implies that when sharks die naturally, they sink to the seafloor.

Moreover, there is a tumor recorded from the jaw of a great white shark. This further stresses that sharks get sick and disease too so they die of natural causes.

We just saw the various way in which a shark can die. These include both artificial means and natural means.

However, it is important to note that humans are the major cause of death for these sea creatures. In fact, several shark species threatened by extinction is as a result of human activities.

The good news is that we are starting to realize the impact of our actions and taking steps to curtail the killing of sharks.