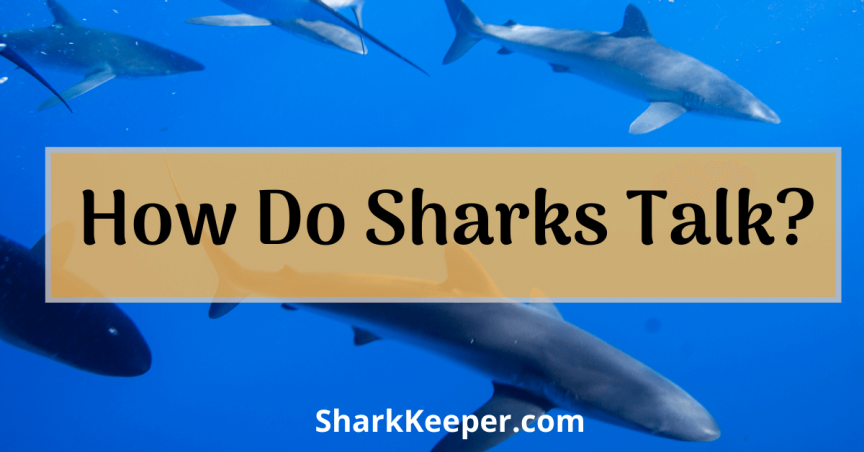 ”How do sharks talk”? can appear far-fetched. But it behooves you to find out if they talk like we do. Or, have their own manner of talking. It won’t take long to find out.

Do sharks talk like us? Sharks don’t make speeches like humans. Nor, do they make recognized sounds like some known animals. They don’t even have vocal cords to produce sounds, like some animals. Therefore, they are mostly stealth and silent creatures in the ocean.

However, they do exhibit certain social and personal behaviors that can signal certain information. Their senses and intelligence help them a signal when they locate food, warn competitors. And, show mating interests. However, there are reports of Rhincodon typhus making barking sounds. This is without science confirming it anyway.

Read on as we shed more light.

What Are the Known Shark Senses?

Sharks have five senses like us. They are processed in their complicated brain. However, they do have additional two senses. These basically help them to detect electrical impulses and low-frequency vibrations.

The sharks’ senses include:

How Do Sense of Smell Help Sharks Receive and Pass Information?

Sharks’ sense of smell is quite intense. Thus, when sharks swim in the water, water flows through their snout into their snares. Then, the sacs of sensory cells (Olfactory lamellae) there helps sharks register scents from water.

Then, the brain has 2/3 of its fraction dedicated to detecting scents. It helps them sort the scents singularly. Hence, they can tell whether it is blood, the scent of prey, pheromones emitted by mates, any type of organic molecules, etc.

Also, how apart their nostrils are, is an advantage to help them discern properly where the scent comes from.

With this, they can decode scents, the direction, and what action to take. They can sense smell up to 600m away. And, can detect one part of blood in one million parts of water.

How Do Sense of Hearing Help Sharks Receive and Pass Information?

Sharks can sense low-frequency sounds of between 20 – 250 Hertz from their environment. This sound can be as far as 200m (650 ft). Or, a mile away coming from prey that is weak and struggles.

How Does A Shark’s Sense of Taste Help It Receive or Pass Information?

Sharks’ sense of taste is not very sharp as others. It might not help them so much to find far-off preys. But, the taste receptors in their tongue can help them clearly discern whether to continually devour potential prey or discontinue.

This is seen when they bite curiously and discontinue eating. Their teeth also contain nerves sensitive to pressure. Sharks curiously learn more about prey like appearances with their bites. Spitting out is information signaling disapproval.

How Do Sharks Sense of Touch Help Them Receive and Pass Information?

Sharks have sensitive nerve endings embedded in their skin. They are also around the barbel area. Just like humans, it helps them feel properly what they are in contact with.

How Does A Shark’s Sense of Sight Help Them Receive and Pass Information?

Sharks can see objects within the 15 m range. Their eyes by the side of their head help them to have a wider scope of vision. Also, the tapetum lucidum (Shiny reflective cells behind the retina) helps them see in low sunlight areas of the twilight and midnight zone.

Though it is not very effective to detect far off preys. They use it to monitor prey movement within their field of vision. Also, it helps them to interpret messages from these preys and finally lunches attack. They also find mates and escape predation with them.

How Do Sharks Electroreception Help It Send and Receive Message?

Sharks have an organ known as ampullae of Lorenzini. You and I do not have an equivalent to this sense. They are tiny cells within the pores usually in the sharks’ heads. The gel and hairs inside the ampullae of Lorenzini, are sensitive to electric charges, from the surroundings.

These electric impulses can come from the contraction of muscle, heart impulses of other animals. And even, their own kind in their environment. Whichever it is, the brain properly translates it.

How Do Sharks Lateral Line Help It Receive and Pass Information?

The lateral line like the ear is sensitive to low-frequency vibrations and contains hairs and fluids too. The neuromasts which are sensory cells in them are sensitive to disturbances, vibrations, and motion. When these reach the hair, it stimulates these sensory cells to send a message to the brain.

How Can Sharks Pass Information to Humans?

The signals sharks display in the presence of divers. Researchers may not fully understand what it exactly means. However, they do show visible signs.

However, there are reports that sharks with depressed pectoral fins, side flexing to show inherent strength.

Swimming in an exaggerated rolling or looping manner, sudden zigzag movement, might be angry. These signals above can depict anger in sharks. Divers witnessing the above should tread cautiously.

How Do Sharks Relay Information To Each Other?

There are reports that sharks can send signals through long distances to another of their kind. This might be through electrical impulses which are picked by the ampullae of Lorenzini of other sharks. Or, through the vibrations and disturbances, they cause, which can be picked up by the lateral lines of other sharks.

However, there are more notable ways which include nodding heads, arching their bodies, and slapping their tails. A slapping display is aimed to deter another from pursuing similar prey.

Do Sharks Produce Sound at All?

Sharks are stealth and silent creatures of the ocean. They do not have vocal cords, like some of their neighbors do. However, there are reports of whale sharks barking like a dog. This is without science confirming it anyway.

Do Sharks Use Biofluorescence To Communicate?

No doubt certain sharks glow in a dim environment. Their eyes are more than 50 times better than humans in such an environment. Sharks block visible light and see blue-green lights only.

When they emit more green light against their blue environment and background. It can create certain floral or butterfly-like patterns. Since this trait of bioluminescence has evolved in sharks for millions of years.

One can say, they can decode its meaning coming from others of their kind. It can be to attract each other. Or, can mean a host of other things that humans are yet to decode. Exactly, why we see it as a hidden mode of communication. It demands deeper studies.

What Does Arching of Body in Sharks Mean?

When sharks arch their body or back. This is a signal that can convey certain messages. It also depends on what made the shark do so. Normally it can be a sign of aggression to warn potential enemies. (Humans, other sharks, sea creatures).

Here, the shark is trying to display the stuff it is made of. How to fit, determined, and also the level of strength it’s got. However, this can also signal defense, fight, and a manner of avoiding potential threats.

What triggers the shark can be overcrowding by divers, the intrusion of abode, and competition for resources.

What Does Tail Slapping Mean?

Sharks may not slap its tail for fun. Slapping behaviors mostly means they are hunting. They use it to weaken preys they want for a meal. This is more effective against preys moving in school. Thresher sharks’ tail can run almost half of its body. Exactly, while their tail slaps, shocks, and stuns salmon fish prey.

While, great white shark mostly employs it to stop others from competing for the same resource.

What Does Gaping in Sharks Mean?

While some researchers suggested gaping, helps shark still carry on their jaws which moved out of position during feeding. Hence, it is termed a maintenance response. It can as well signal stress, threat, or hypoxia.

Now, we have known that sharks do not make speeches. Rather, they depend largely on their senses and certain displays to signal certain of their intentions.

Some of the displays include arching of their backs, gaping of the mouth, and nodding of heads. There are sharks like the draughtsboard shark which inflates themselves on seeing predators.

We looked at the bioluminescence of sharks. This phenomenon could be used by sharks to pass information to others of their kind. This is not yet fully understood by humans. This makes this subject, one to be studied for years to come.