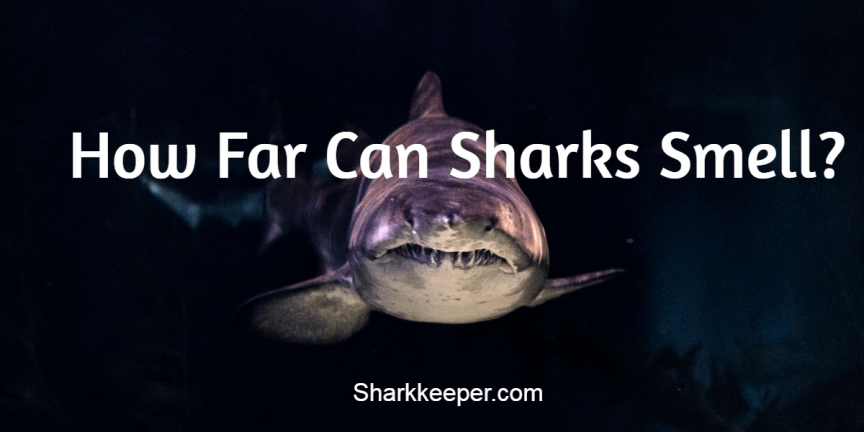 Sharks can smell blood up to 1 mile away. In fact, scientists think sharks can smell 1 drop of blood a quarter of a mile away. However, the scent of blood does not reach them right away. Lastly, neither does it always cause them to attack their prey.

In this article, we’ll look at if sharks can smell blood in water. We’ll also look at if they’re attracted to human blood. Lastly we’ll take a look at what attracts sharks to humans.

Next we’re going to look at how sharks smell.

Yes, they can. Incredibly, sharks have an olfactory system (A system that allows them to smell) that is more than a few hundred times stronger than that of we humans. In addition to this, a shark’s nostrils are located below their snout. Impressively, these nostrils are only used for picking up scent rather than breathing.

This is nothing short of impressive. However, this is just the tip of the iceberg.

Subsequently, sharks do have a sense of smell that many of us would find nothing short of impressive. What this means is we need to be aware of how good a shark’s sense of smell is. This is so we can stay safe in the water.

How far can sharks smell?

As we have already seen, it’s thought that sharks can smell blood up to 1 mile away. In fact, scientists think sharks can smell 1 drop of blood a quarter of a mile away. However, the scent of blood does not reach them right away. Incredibly, neither does it always cause them to attack their prey.

How far can sharks smell blood in miles?

Firstly, it’s Great White Sharks that has one of the best sense of smells out there. This is because they have the ability to detect a single drop of blood in 100 liters (or 25 gallons) of water.

Secondly, Great White Sharks can sense a single drop of blood from up to 5 km (3 miles) away. Impressively, the sharks can use its acute sense of smell to detect the blood using their effective olfactory bulb. This is an organ in their body which is partly responsible for giving the shark its notorious reputation.

Interestingly, some scientists say that a shark’s ability to smell a single drop of blood up to 5 km isn’t correct. Incredibly, they say that they have the same sort of sensitivity as any other fish.

How far can sharks smell blood in the water?

When we humans smell something in the air, it’s because scent molecules have dissolved into the lining of our noses. Interestingly, when a shark is smelling something underwater, there is very little difference in the way they smell something.

Firstly, seawater dissolves scent molecules. When this happens the scent reaches the lining of a shark’s snout. This means the shark will be able to detect prey that has given off the scent.

Are sharks attracted to human blood?

In a word, yes. As we have already seen, a shark’s sense of smell is nothing short of amazing. However, this is not the complete answer. Sharks are attracted to human blood to a degree, but this is a lot more too it.

Sharks are more attracted to the blood of a sea lion or a fish. Incredibly, they are not that attracted to human blood. It should be noted that if a shark was to attack a human it could be a case of mistaken identity.

A shark may have thought the human was a sea lion or a fish. Secondly, sharks very rarely attack humans on purpose. Finally, this is because there is a lot more food out there for them to eat. Humans are unlikely to be as tasty as a sea lion is to a shark.

In other words, sharks will rarely deliberately attack humans.

What attracts sharks to humans?

There’s no real evidence to suggest sharks are attracted humans. Secondly, if there are a lot of sea lions and humans in the area, sharks will opt for sea lions.

There could be an area full of sharks and with many humans nearby. If this is the case, people tend to think the sharks are attracted to us. Sharks will be interested in the prey.

In general, sharks tend to ignore humans. We are, after all, just a bit of meat that isn’t too tasty. However, when warmer waters move south in the winter, adult sharks will seek those waters. We humans also like to seek those warmer waters. Without a doubt, this means humans and sharks are likely to meet.

Now let’s bring the subject of surfers into the equation. Surfers like to surf in relatively deep water. However, some of these waters are also home to sharks such as the Bull Shark. In 2001, sharks attacked surfers. They had chosen to surf in an area favored by Bull Sharks. Astoundingly the surfers took their lives in their hands by putting themselves in harms’ way.

However, it’s thought that, again, there was a case of mistaken identity. In other words the Bull Sharks thought the surfers were food.

In areas where there has been an increase in tourism, it often comes as a surprise when a shark attacks. Secondly, they hunted for prey in the waters and had no reason to change their behavior. Thirdly, the sharks thought the surfers were the prey. They attacked the surfers as they thought they were food.

What smells do sharks hate?