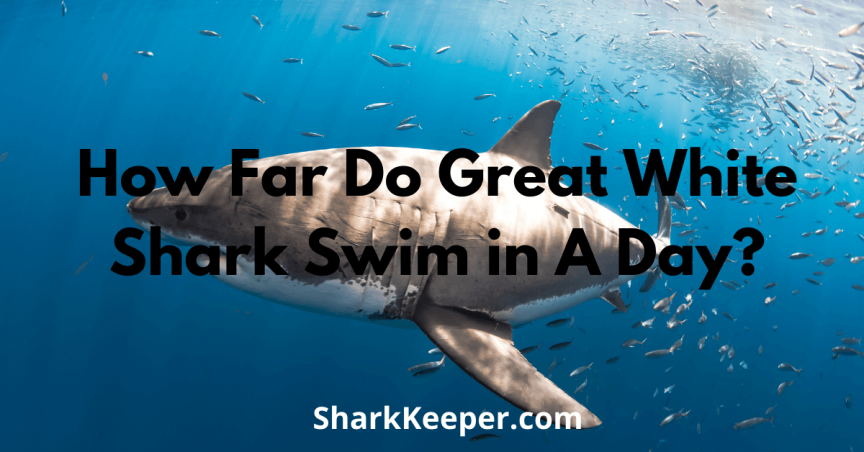 The Great White shark is a species of mackerel shark. They are also called pointer sharks. Considering that great white sharks are very active species, many people wonder how far they swim in a day. Of course, these sharks need to constantly swim to breathe, so they must swim great distances in a day.

How far do great white sharks swim in a day? This depends on the great white shark and the swimming speed. Thus, a great white shark can swim about 50 miles (80.4km) in a day. The pointer sharks prefer water with a sea temperature of 50 to 75-degree Fahrenheit. They can swim at a speed of 25 km per hour for a short burst and a depth of 3900 feet.

As sharks swim, their tails swing from side to side, it creates twice as many jets of water like other fish tails. This movement helps to smooth their thrusts in the water. It also makes their swimming movement more efficient. Its tail is crescent in shape and pointed. They are streamlined. All these contribute to how far a great white shark can swim.

More factors contribute to the distance a great white shark can swim in a day. Let’s find out!

Why Does Great White Shark Travel A Long Distance?

The Great White shark is a highly migratory species. Because of this nature, they can’t be kept in an aquarium. Each year white shark migrates over a long-distance to find another feeding ground.

The open ocean is almost devoid of prey during their migration. Great White sharks sustain themselves with energy re-served in the lipid stored in their liver.

The liver of an adult great shark amounts to more than a quarter of its body weight. They power their migration across the ocean with muscles warmed from their own metabolic heat.

How Fast Can A Great White Shark Swim?

The great white shark is really fast for short distances. Their speed can be as fast as to capture their prey. How fast a white shark is, also depends on their sizes. Smaller and streamlined sharks are capable of higher speeds than larger sharks

Great white sharks can swim at speeds of 25 km per hour (16mph) for short bursts. This fish species are is an apex predator. They can swim much faster when attacking prey.

How far can Great White sharks see? Does Their Vision Help Them While Traveling?

Great white sharks possess has great vision and very beautiful blue eyes. Their eyes are 5 times the size of human eyes and the structure is almost similar to human eyes.

Their retina has two areas. One has an adaptation for day vision and the other for low-light and night. Their Iris is very dark blue. The great white shark rolls its eyes back into their socket when they feel threatened especially during hunting their prey.

Their eyes have a secret layer of reflective crystals that helps them to detect the direction and amount of movement made by prey. The layers are located at the back of their socket. They can see as far as 820 feet (250 meters) away.

In fact, great white sharks have a sharp vision that enables them to see very far while traveling in the open ocean. As a result, they see their location even before getting there.

How Does the Feeding Habit of a Great White Shark Help It Cover Far Distances?

The open sea does not have prey for the great white sharks during their migration. As a result, they sustain themselves with lipids (fats) stored in their liver.

A large Great White shark can eat up to 11 tonnes of meat in a year. They have two small sensors in the skull called ampullae, or Lorenzini that senses the electrical pulses from the body which help them to zero in on the splashing sounds of a wounded seal or fish. Their speed and coloring help them to hunt their prey.

Sharks typically attack by biting their victims quickly with enough force to cause a major trauma. They then leave the injured prey to go into shock or they bleed to death before they return to then to feed on the carcass of the animal.

The teeth of a great white shark are triangular with serrated edges for cutting. Their jaw is lined with dozens of razor-sharp teeth. Behind every row are rows of replacement. The older teeth snap and the new teeth develop on the inside jaw.

The teeth has fluoride covering. This makes them cavity resistant. The enamel is made up of a chemical called fluorapatite which is resistant to acid produced by bacteria.

All these help them feed and store up fats for use during migratory days.

Is Long-Distance Swimming Part of the Behavior of a Great White shark?

Great White Sharks are migratory species. Not only that, but they also obligate ram ventilators that need to constantly swim to breathe. This means they are always moving and it has become part of them.

Another possibility is that white sharks bite to show their dominance. The great white shark is one of the few sharks that regularly lift its head above the ocean surface to gaze at other prey. This process is called breaching. They normally do this to catch fast-moving prey like seals.

Great White sharks are generally very curious animals. They display intelligence and also, sometimes observed to be moving in groups every year. They relate peacefully in the group.

In fact, the social structure of a group is probably most aptly compared to that of a wolf pack. In that, each member has a clearly established rank and each group has an alpha leader.

Why Are They Called White Sharks?

A Great White shark is protected by its white chest and grey backside. This skin design is meant for camouflage. it prevents them from being seen from below against the lighter sky coming from through the water’s surface.

Their grey back helps them to blend in darker, deeper ocean water below them. Their color is very important to them for hunting down their prey.

Great White sharks are great predators but they have a weakness. A great white shark typically can’t survive for a long time in a freshwater habitat because their bodies need salt. Freshwater crowds their senses and compromise their reproduction. It also makes them sink.

Why Can’t the Great White Survive in A Fresh Water Habitat?

Great White sharks don’t have swim bladder – the gas-filled organ that helps other bony fish float. However, they pose extra-large livers which provides them some buoyancy and helps them not to sink.

But freshwater changes how much buoyancy the shark’s liver can provide. When they swim in freshwater, they are 2 – 3 times less buoyant than in saltwater. To be able to tolerate freshwater habitat, they need a liver eight times as large.

How Do Great White Shark Survive in Their Habitat?

The great white shark possesses fins and a streamlined body that help them through the water. It has gills that extract oxygen directly out of the water. Because of their gills, sharks can stay underwater for long and not have to surface to breathe. Great White sharks also have a large number of sharp teeth which makes them a fearsome predator.

This shark species breathe by filtering oxygen through their gills and letting out carbon dioxide through the water. Great White sharks breathe through ram ventilation, this means they have to keep swimming to breathe. If they stop moving or slow down, they might start weakening and struggle to breathe, unlike other fish that can pump water through their mouth.

A fishing bladder helps fish to float in water, great white sharks do not have a swimming bladder that helps them float. A white shark makes use of the dynamic lift, which means when the shark is moving, it makes use of its powerful pectoral fins to generate a lift that keeps them balanced in the water. The lack of swim bladder- gives them the ability to move freely in different depths of the ocean.

When the muscle of a great white shark is warm, they move more efficiently. They tend to travel faster and farther. Great White sharks can swim about 50 miles (80.4km) a day on estimation.