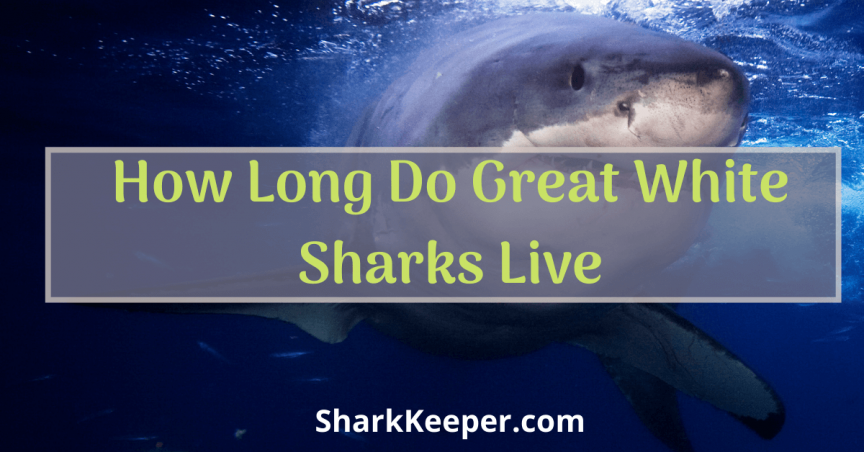 Are you wondering how long a great white shark live? Well, lifespan is an important factor when studying a shark. Moreover, considering that the great white shark is popular. Certainly, it holds the record for several things, do they hold any also for how long they live?

The great white shark joins a host of other species of shark on the list of ‘long living sharks’. The oldest shark is the Greenland shark that has lived for at least 272 years. This smashes the record of the bowhead whale that has lived for 211 years.

How Do You Tell the Age of a Shark?

There are a few ways through which you can tell the age of a shark. For some species, they deposit growth layers in calcified parts of their skin or vertebrae. By observing these layers, you can tell their age.

For some, as they age you can tell its age from reading the rings that form in the hardened tissue. Just like telling how a tree is by counting the rings.

The rings occur on the sharks’ vertebrae. The longer the shark lives, the more rings it gets; imagine, a shark having 20 bands. You can assume it to be 20 years old.

Another way you can tell the age of a shark is by ‘catch-and-release tagging programs’. Researchers can catch a shark and tag it. When they catch the same shark in the future, the tag would tell the age. For some, you just have to look them in the eyes.

How Does A Great White Shark Survive for Long?

Sharks have enough ‘weapon’ in their arsenal to survive the ocean and all that it comes with. The shark’s body structure, teeth, spine, skin, and backbone all plays important role in its survival.

Sharks have a backbone made up of cartilages; fortunately for them, cartilages are more of an advantage than bones would have been.

These cartilages are so lightweight, allowing the shark to conserve energy and swim long distances. Cartilages also allow sharks to turn swiftly underwater to get hold of what it has on its tail. Or, to turn away from danger.

In areas where the shark needs more protection like the skull and snout area, the cartilages in those areas are sturdier and firmer, coated with extra calcium salts.

How Long Does the Oldest Shark Live?

Whilst humans try so much to live for so long, sharks do little and live for longer years than humans. The Greenland shark is the longest living shark surviving since the Age of Enlightenment.

The Greenland shark broke the record of the oldest vertebrate once held by the bowhead whale. Amazing record; something humans can only dream of.

Unlike other sharks, the Greenland sharks do not have rings on their backbone to help determine their age. Other means which can come handy in measuring the age of Greenland sharks. For example, a garland shark’s age was assumed by looking it in the eyes. See source

How Long Do Mako Sharks Live?

The fact that the mako sharks and great white sharks are of the same family there is a tendency that both can survive for the same number of years.

The lifespan of mako sharks is from 28 to 35 years. It appears that the mako sharks are living longer as time progresses. This does not however take out the fact that females get older than males.

How Long Do Porbeagle Sharks Live?

Another shark in the Lamnidae family is the porbeagle shark. These sharks are found close to and far away from the shore of the ocean.

Like the great white shark earns its name from its size, the porbeagle shark earned its own name from the shape of its body – porpoise shaped and its hunting abilities – beagle-like.

All these shark’s abilities help contribute to the shark’s chances of survival in the ocean. The shark has a stout body shape streamlined for fast movement.

With the shark’s sharp teeth, it bites off meat chunks from its prey and even scares predators. When they are not diving deep into the ocean floor to get dinner, they are often seen stealing fish from longlining boats. These sharks would do about anything for survival.

The lifespan of smaller south pacific porbeagle sharks is up to 65 years while North Atlantic porbeagle lives an average of 46 years.

How Fast Do Great White Sharks Swim? Does Speed Affect Their Lifespan?

The blunt torpedo body of a great white shark contributes to the reason for the shark’s speed. This alongside its skin of dermal denticles and cartilaginous skeletal system.

All those contribute to the great white shark’s speed burst of 35mph. This however does not reach that of the mako shark at 45 miles per hour.

You may believe that speed affects the lifespan of a shark. Maybe because some researchers speculate that the slowness of the Greenland shark helps it to live long. Well, Great white sharks are fast and they still live long. In fact, p their helps them feed and stay away from predators.

Speed is needed to hunt prey in the ocean just like animals that hunt on land. The great white shark is one vicious creature that hunts small and bigger prey.

The skin of the shark helps it reduce drags that are meant to be happening when they swim in the water. The skin is made of tiny flat V-shaped scales that are more like teeth than fish scales.

The cartilage of the great white shark is dense but not as strong as bones. Cartilages allow sharks to retain buoyancy and be able to swim very fast underwater.

Can You Swim with A Great White Shark?

Generally, sharks are the ocean’s top predators with enormous strength, speed, and teeth that could make you pee your pants. However, some are human-friendly, allowing the human to swim with them. See.

Sharks are sadistic hunters that sample bite, meaning that they bite their prey, leave it to get weak then come back to finish up. For humans, when they sample bite, they just swim off because humans are not on the shark’s menu list.

In the end, we found out how long a great white shark can live alongside answers to other questions. Incredible how these sharks get to survive eras and even the age the dinosaur could not survive.

And, for emphasis, great white sharks live long but they do not live as much as the Greenland shark. They swim fast too but not as much as their relative, the mako sharks.