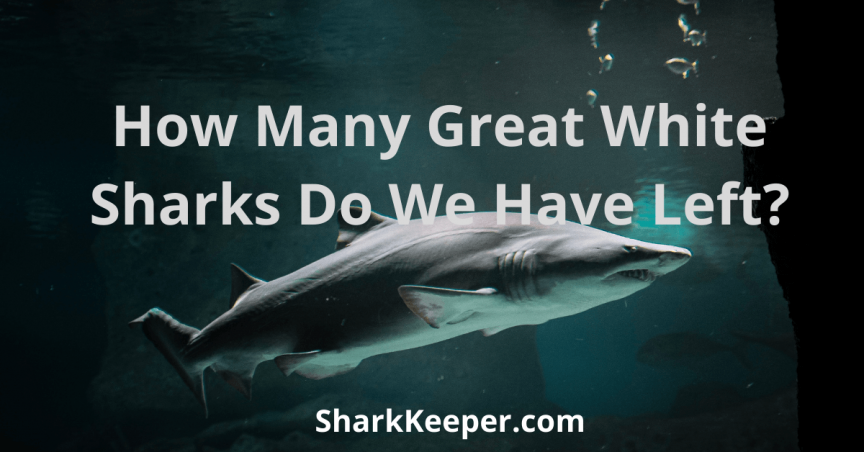 The Great white shark is now under close observation for being under the threat of extinction. You may wonder how many Great White Sharks we have left in the wild? And, what are the real threats to the population of these feared ocean predators? The truth is that the public has a cruel opinion toward great white sharks, hence, would care a little.

There are rumors that high mortality rate torment great white sharks. This means that their chance of going into extinction is high. This will be a major issue for the marine ecosystem.

Are Great White Sharks Being Hunted?

Yes, both humans and a predator whale known as the orca whale actively hunt the great white shark. The Marine Policy journal estimates that humans kill about 100 million sharks every year. See Source

The number of estimated shark death might even be much above what you see. However, Marine Policy also pointed out that their estimate is a conservative one. This means that it could reach around 270 million humans kill every year. If you go by the estimate of 100 million per year, that means humans kill 11,416 sharks each hour that passes across the globe.

Fishermen are responsible for the great majority of the shark killings. They do it mostly the fins of the sharks which have great market value. Of course, they are the main ingredient for the popular shark fin soup. The fin soup originates from the Chinese cuisine centuries. At the time, it was only a luxury for the Ming dynasty.

Why Do Humans Hunt the Great White Shark?

Humans hunt the great white sharks for a good number of reasons. For example, shark fin soup, shark tooth used for artifacts, and often used as a trophy for sport fishing events. Commercial fisheries often obtain the white shark as bycatch. Sometimes, they can also entangle in meshes that protect beaches. So generally, humans kill more sharks in the world than sharks kill humans.

Also, the great white sharks are endangered not only because of human activities on them. But because of other predators, they are prey to. Sharks are prey to the Orca whale. The orca whale (also known as killer whales) is a marine mammal. They are among the sub-order of toothed whales (known as odontocetes). The orca whale prey on the vital organs (hearts, liver, testicles, lungs, etc.) of the great white shark.

According to an article by Paula Froelich, researchers performed autopsies on the dead bodies of at least six great white sharks. These bodies were recovered over the years on the coast of South Africa. The results of the autopsies proved that killer whales attack these species for their organ rich in nutrient. (Check Source)

The great white shark is also the sharks that have the record of the most attacks on the humans. That is why we often refer to it as the “man-eater”. The great white shark feeds primarily on sea lions, sea otters, earless seals, etc. These tend to contain enough fat which is good for energy and strength.

The great white sharks usually occur in the coastal surface waters of all the major oceans which have water temperature between 12 and 24 °C (54 and 75 °F). They also have greater concentrations in the United States (Northeast and California), South Africa, Japan, Oceania, Chile, and the Mediterranean including the Sea of Marmara and Bosphorus.

If the life cycle of the great white shark is 30 years, and it reaches puberty at the age of 9 – 10 for males and 14 to 16 for females, bearing in mind that the gestation period is 12 to 18 months, it shows that each female great white can only reproduce at the maximum of 5 to 7 times before she dies.

The litter size of the great white ranges from two to 10 pups, although litters of up to 17 pups have been documented. At birth, great white shark pups measure 5 feet (1.5 meters) and weigh about 77 pounds (35 kilograms).

Can We Save The Great White Shark from Extinction?

Yes, there is what we can do. The great white shark is going into extinction; you and I have a role to play to save them. We know that we can’t save them from the orca whale. But we can do any of these that will help save the species of the Carcharias.

The first thing we can all do to save the lives of the great white shark is by stopping the consumption of seafood. This is especially the shark fin soup which made of shark fins. This will cause the market demand for sharks’ fins to decrease. Thus, leading to a reduction in the hunting of sharks.

Secondly, speaking up whenever there is sea animal abuse. You must not be present in the sea all the time chasing fishermen away for fishing. But, you can speak up during your little fishing adventure with family or friends whenever such needs arise.

Thirdly, join any conservation organization voluntarily and help in the sensitizations about sharks and the importance of their lives. Educate and promote community awareness on the “safe the shark life campaign”
The fourth thing you need to do is to write to your legislatures to pass a law against the killings of sharks. These laws will make it illegal to remove any part of the fish in the sea. To possess shark fins not attached to the body, or to receive from or transfer the fins to any other vessel at sea.

Finally, conservationists are educating the public and changing their perceptions on sharks, with films such as “shark water” and the incredibly popular Shark Week programs. Your job is to help promote the movement and make the movies go viral.

These steps will help save the great white shark from extinction.

Yes, it does one hundred percent. The rate of great white sharks’ hunts by both man and orca whale is far greater than the rate of their reproduction.

The great white shark is gradually going into extinction. The reasons is due to the fact that the great white sharks have a very slow reproductive rate, they are being hunted by a human for various reasons and the orca whale for their vital organs like heart, testicles, liver, etc.

There are less than 3,500 great white sharks are left in the world and they need to be protected and saved from extinction.