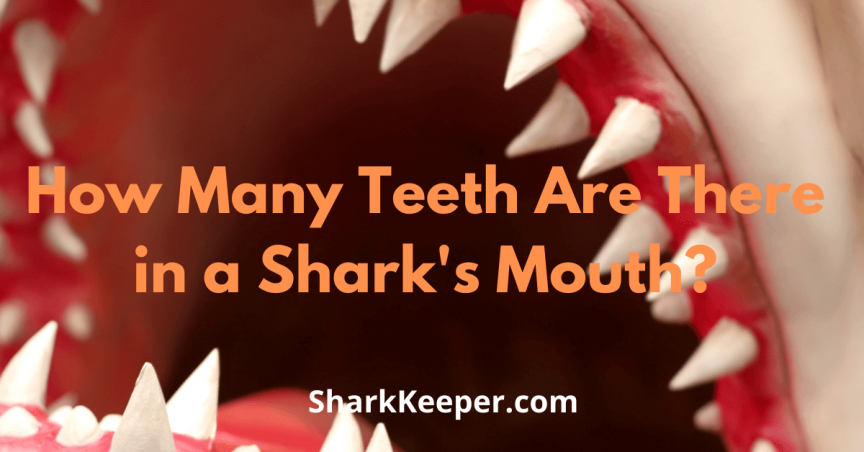 Sharks are being referred to as an apex predator in the water. Their instrument to hunt is their strong sharp teeth. Surely, curiosity would make us think about how many teeth could be in their mouth as they slice their prey into 2 with it. Well, let’s find out.

Sharks can have as many as 3000 teeth at once. Sharks like the great white shark have approximately 50 teeth, but they have multiple rows of teeth in development that are ready to take the place of the teeth that falls out. The sharks that live in the ocean are of different species and their teeth vary. The number of teeth a shark possesses depends upon the species of shark or the type of food they eat.

Shark’s teeth do not possess cavities. This is because the surface of a shark’s teeth contains fluoride which helps to prevent the decay of their teeth.

The kind of teeth a shark has depends on their type of food they eat. A shark’s tooth contains calcium phosphate material. The baby of a shark (pup) has a full set of teeth at birth, unlike human babies.

These and many other facts about the sharks’ teeth will fascinate you as you read on.

Do Sharks Teeth Have Enamel?

Sharks possess what they called dentin inside their gum. They are soft tissue material and are covered in hard enamel which is also very similar to humans. Sharks’ teeth due to their use for hunting look stronger than human teeth, but they are not.

What Is the Shape of a Shark’s Teeth?

Shark’s teeth have different types and sizes. Their type of teeth depends on their type of food. Hence, some shark species have teeth that are very sharp, wide, wedge-shaped and they have an unevenly cut edge. They are used in catching and tearing their prey. For example, the shark that has this shape of teeth include the great white, bullhead, and hammerhead sharks.

Some sharks have tiny and sharp pointed teeth that are used to catch prey with a slippery body, example is the mako sharks while some sharks like nurse sharks and angel sharks possess thick conical or flattened teeth at the back of their mouth. They use it to crush crabs and mollusks.

How Sharp Is A Shark Teeth?

Why Do Sharks Have Multiple Rows of Teeth?

Sharks have many teeth that they use in holding their prey tight. Their teeth easily fall out because of the way they attack their prey violently. They are always violent when it comes to hunting and feeding.

They have rows of teeth that move up to replace the fallen ones. Sharks can never lack teeth since they keep replacing them. The skin within a shark’s mouth shifts the new teeth into position.

How Often Do Shark Lose Their Teeth?

Sharks’ teeth are arranged in rows and they have many rows of teeth both in the upper jaw and lower jaw. Sharks can lose up to 100 teeth per day. New teeth can replace the older ones within a day to a couple of weeks. Shark’s jaw is very powerful, and they support and help them in preying on animals for food.

How Many Teeth Does A White Great Shark Have?

The great white shark has rows of teeth behind the main ones. The teeth are not attached to their jaw and can fall out easily. Once a great white shark opens its jaw, the teeth move into place. Their mouths are lined up with about 300 serrated triangular teeth at once.

Which Shark Has the Strongest Bite and the Most Teeth?

A bull shark has about 50 rows of teeth while some sharks have about 15 rows. Bull sharks bite with the greatest force among the other sharks like a great white shark. The bull has a very wide head.

They have the strongest bite because of the width of their jaw. They bite and hold on to their prey, unlike great white that bites and leaves them to bleed to death before coming back to swallow it.

Do Shark Chew Food with Their Teeth?

Why Are Some Sharks’ Teeth Black?

Shark’s teeth are normally white or creamy and cold. The only shark that has black teeth is the one dead for a long time or those teeth that they lost. The process those teeth undergo to turn black is called permineralization.

When a shark dies or loses a tooth, it goes down to the bottom of the ocean. The tooth becomes buried by sediment. Oxygen preserves the tooth of a shark but, the sediment that buries the tooth does not have oxygen.

The tooth can turn black, brown, grey, or even red depending on the type of chemical composition of the sediment they are buried in. When the sediment that the tooth is rich in Iron, the tooth turns red or brown

and the ones that are rich in phosphate can turn the tooth black. This process takes a lot of time to form. They can take up to 10,000 years to form.

Sharks’ teeth can be valuable. Collectors and traders often sell and buy them. The most valuable shark tooth is one of the giant Megalodon sharks. Sharks come in different types, and they also vary in monetary value. Some shark’s tooth is more expensive than others.

There are four basic types of teeth that sharks have. These include the dense flattened-in teeth, the needle-like teeth, the pointed lower teeth with triangular upper, and non-functional teeth. The teeth types vary with shark species. Let’s see their functions and differences.

Dense flattened teeth: They are for crushing preys, example of those sharks are nurse sharks and angel sharks.

Needle-like teeth: These teeth were the first common type of shark tooth. Sharks with this type of tooth feed on small fish. They are for grabbing prey with slippery and narrow bodies. Examples of these sharks are the bull shark and hammerhead shark. They use their needle-like teeth to tightly grip their prey.

Pointed lower teeth and triangular upper teeth: This type of shark teeth is crucial when cutting prey with a large body. They use both teeth to cut their prey which is large into smaller pieces before swallowing them. An example of a shark with this type of teeth is a great white shark.

Non-functional teeth: The type of shark with this type of teeth usually feed on plankton. They are filter feeders because they open their mouth and allow tiny organisms to go into their mouth. They feed on them without making use of their teeth. Examples of these sharks are whale sharks and basking sharks

Transitional teeth: It involves those species that have evolves into another species. Their teeth become difficult to classify or identify. The teeth may exhibit the characteristics of both teeth.

Why Do Shark Regenerate Their Teeth?

Sharks depend heavily on their teeth for their survival. They use their teeth as weapons for protection and attacking their prey for food. Sharks’ teeth sit in cartilage, therefore they may easily remove from their position.

Sharks tend to have several tooth rows in their jaws. These tooth rows regrow regularly meaning that sharks don’t regrow their teeth one by one. The new tooth moves forward to the position of the fallen tooth by soft tissue.

Sharks can have 30,000 to 50,000 thousand teeth a lifetime. The front teeth house the largest teeth series. And, the second row has a smaller teeth series. The teeth keep reducing in size at each row. The shark’s front teeth are the shark “working teeth”, while the ones behind are for preying on animals but not as much as the ones in the front row.

The younger shark replaces their teeth faster than the older ones. Sharks also naturally shed their teeth throughout their lifetime with the front teeth replaced approximately one day to a few weeks, so they keep making use of the smaller teeth behind until all the teeth shed are replaced.

When they push their tooth forward, the tooth grows back into the size of the tooth shed. The cold temperature of the water helps them to hang onto their teeth long before it falls off. Sharks’ teeth do not attach to their gum and have not root that holds human teeth firmly to their jaw.

This page explores the number of teeth in a shark’s mouth, thus, answering the question “How Many Teeth Are There in a Shark’s Mouth?”

Summarily, the number of teeth in a shark’s mouth depends largely on the species of shark and the type of food it feeds on. Hence, a shark can have as many as 3,000 teeth at once.