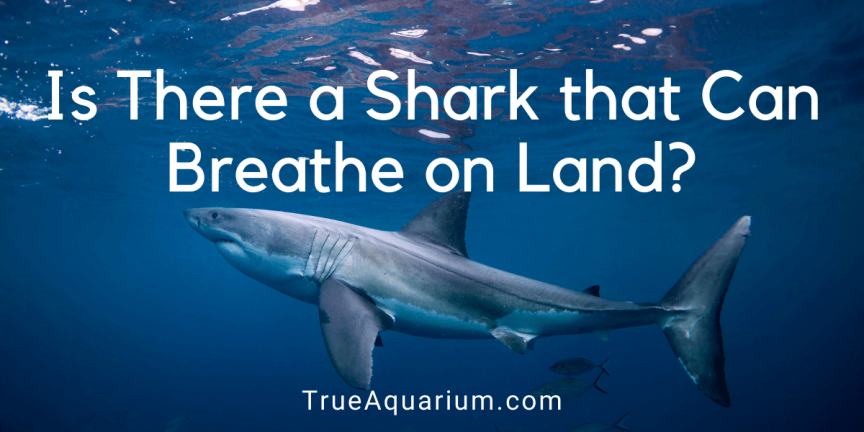 The correct answer to the underlying question is that no shark can breathe on land. Let’s see it this way, terrestrial animals can breathe in air and get oxygen with the help of their lungs. But sharks do not have lungs, so cannot take in oxygen like terrestrial animals. Moreover, sharks have gills that help them take in oxygen only in water. Without water, sharks cannot breathe!

Extending this answer, most shark species are ‘ram ventilate’ meaning they need to keep swimming with their mouth open to allow water flow through their gills to get oxygen.

This does not however mean that a shark dies once it’s out of the water. Sharks would survive outside the water for as long it takes the water in its gills to dry off. This may range from a few minutes to about an hour.

It may also interest you to know that some shark species can even “walk” on land. Surprising right?

Find out how they do it!

How Long Can Sharks Breathe on Land?

Sharks do not breathe on land! Yes, it is as simple as that.

Though, you can ask a more appropriate question that goes like this,

How Long Can Shark Survive on Land (Outside of Water)?

A shark on land can survive anywhere from a few minutes to an hour. It all depends on the circumstances surrounding it coming outside of the water and the shark species involved.

However, you should know that a shark might survive outside of water for long minutes only to die after being placed back into the water. And, you wonder, is that really surviving?

When in water the gills of sharks stay separate to provide a large surface area for gaseous exchange. This is not so when the sharks are outside of the water.

In fact, when outside of the water, the gill flaps tend to flatten out and stick on top of each other. This simply prevents the passage of gas leading to hypoxia causing brain damage and ultimately death.

There are several other problems associated with sharks getting outside of the water. This includes the fact that they can get internal bleeding leading to death from their organs crushing. Of course, sharks do not have ribs nor strong bones to give them support.

Another issue is that the body of shark release stress hormones which raises the blood sugar level as they continue to fight. It will take so long to for the blood composition to return back to normal.

After all and the shark loses all its strength to swim, it creates another complication. Certainly, sharks are not naturally buoyant in water. Hence, they would sink to the bottom.

Ram ventilators would suffocate as they aren’t able to get water through their gills.

How Do Sharks Get Outside of the Water Since It’s Not Safe for Them?

Sharks get outside of the water following different circumstances. Sometimes sharks are being washed ashore following a tide.

Researchers also capture sharks and take them out of the water for the purpose of research. Although, in circumstances like this, they usually get the shark back into the water in less than 5 minutes.

Some shark species by themselves move out of the water when necessary. A Typical example is the epaulette sharks known to ‘walk’ between tidal pools.

During this movement, they tend to move out of the water for some time before getting back into the water. The adaptations of epaulette sharks help them to survive with very little or no oxygen during this time.

How Do Epaulette Sharks Walk on Land since Sharks Can’t Breathe on Land?

Epaulette sharks have special adaptations that help them to walk on land. The first is the adaptation to walk!

As you may have thought, sharks are meant to swim and not ‘walk’. Yes, you’re right, even epaulette sharks can swim quite efficiently.

However, their pectoral and pelvic fins evolved to function as feet. These sharks prefer to ‘walk’ on the seafloor, coral reefs, and navigate through rocks and crevices.

The ‘walking’ motion of epaulette sharks is more like a wavy, clambering movement.

With this, they can climb out of the water and walk on land when need be.

The second adaptation of the epaulette shark to walk on land is the ability to stay active without oxygen for prolonged periods.

They are able to achieve this by slowing their heart rate, limiting the flow of blood to certain parts of their brain.

And, with these epaulette sharks can walk on land.

Why Would Epaulette Sharks Get Outside of the Water?

The answer is simply Natural Causes! It is not as if epaulette sharks have great moments outside of the water. Most of the time that they walk on land, they had to.

Epaulette sharks mostly inhabit the shallow reef system which can get so shallow during low tides. When this happens, there is a build-up of isolated pools between exposed reef structures.

Within these pools are fish and other marine animals trapped. As a result, the oxygen level within these pools drops drastically up to 80% usually the outcome of the breathing of the trapped animals.

In most cases, epaulette sharks are among the animals trapped in these pools with low oxygen. And, since they have the adaptation to survive better outside of water, they tend to climb out of such pools in search of a better environment.

This is most likely the reason why epaulette sharks would get out of the water.

On another note, epaulette sharks are popular for walking across exposed reef structures to hunt prey in areas where other predators cannot go. Also, in such areas, it is difficult for prey to escape.

This adds to the reasons why epaulette sharks get outside of the water to walk on land.

As for breathing on land, no shark species can breathe on land!

This is so for cartilaginous fish such as sharks.

Therefore, Bamboo sharks, Tiger Sharks, or Leopard Sharks cannot breathe on land. The most they can do is survive for some time when on land which cannot be for too long.

Do Sharks Need Air for Survival?

Sharks do not need air to survive. What they need is oxygen just like most other animals.

Of course, we have lungs that help us do so. Unlike us, sharks have gills and not lungs which helps them extract oxygen from the water.

When you observe sharks breach out of the water, it is for some other reason and not to take oxygen from the air.

Note that sharks are not the same as dolphins. This is because dolphins have lungs and they occasionally surface to breathe. More so, dolphins are mammals while sharks are Cartilaginous Fish!

Do Sharks Need Oxygen for Survival?

The answer is yes! The mechanism behind sharks extracting oxygen from the water with their gills is just like that of the lungs.

Sharks do need oxygen to stay alive. The lack of this oxygen can lead to a condition known as hypoxia.

Hypoxia in turn causes damage to the shark’s brain leading to the death of the shark!

Can a Shark Exist Outside of the Water?

When you say exist, sharks can certainly exist outside of the water. The question now is whether you want it alive or dead.

Of course, a dead shark exists and can be outside of the water.

If you’re talking about a living shark existing outside of the water, it will not be alive for long.

This is because sharks do not get oxygen outside of the water.

Epaulette shark species mentioned above may do better than any other species outside of the water. But, when they stay too long, they’ll still meet their death due to lack of oxygen.

At this point, you are now clear with the facts that sharks cannot breathe outside of the water. They do not also survive for long on land.

This simply suggests that the best for any shark is to leave it in its aquatic environment.

Whatever your mission is with a shark, if you want it to be alive, then leave it inside the water. This page also emphasizes the importance of oxygen to the survival of sharks. And, of course, this is not oxygen in the air, but, oxygen in the water!