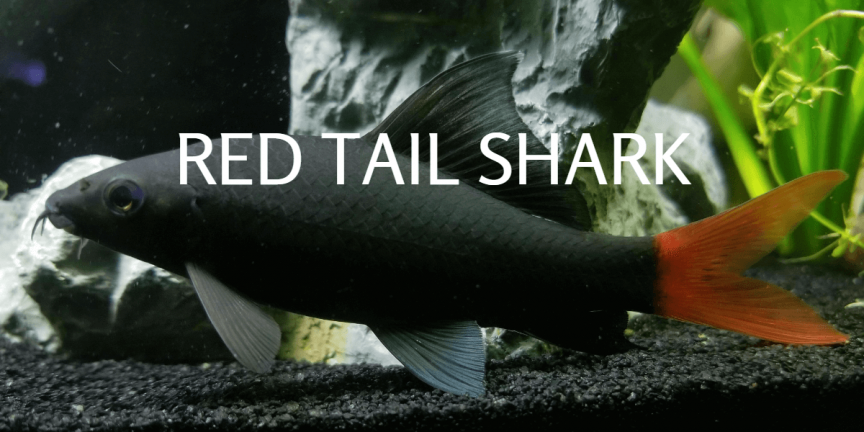 Most sharks are often entertaining and fun to watch due to their activity level. And, like an aquarium hobbyist, having a Red Tail shark in your home aquarium is usually a pleasant experience.

The feeling is quite exceptional. And it makes you take pride in your hobby. However, do you know the do’s and don’t that make this breed a standout species?

Do you know how to properly take care of it? Well, it is certainly okay if you don’t for now because this page is for you!

In this post, we will take you by hand and teach you why Red Tail sharks are outstanding in any freshwater aquarium. Also, we will see their distinctive features and their typical behavior.

Hence, here are the major headlines we detailed:

Meanwhile, take a look at the detailed stats before we spill the beans.

Red Tail sharks are active aquarium fish that are entertaining to watch. And, can provide countless hours of fun.

As a result of their less fussy nature, they are easy to feed, maintain, and less challenging to manage.

The origin of Red Tail Shark

Discovered in the MeNam Chao Phraya basin. But, due to excessive poaching, it was believed to have become extinct.

However, due to the thriving aquarium trade, this breed survives mostly on private collections.

Regardless of its name, this species is more of a carp than a shark. And, it belongs to the Cyprinidae family.

Eventually, the fish is popular for its impressive and entertaining look. Mostly due to its vibrant forked red tail.

They are omnivorous and territorial. Thus, should be kept in large aquariums.

As juveniles, most Red Tail sharks are timid. As a result, you should provide them with enough hiding spaces. (we advise you read tank requirements attached within)

Then when they mature, they become more territorial and aggressive to other fishes. Especially, those which may trespass into their territory.

Although, they may not physically bite or harm them. However, will chase them to the point of exhaustion.

On dailies, you would find them swimming back to the bottom section of the tank. And during a feeding session, you will see them bully other fish if fed together.

For that reason, we suggest a larger tank size of (200+ gallons) with large hiding spaces. And then, ensure separate eating for both the shark and other fishes.

Thus, each fish will require 1 meter of tank length.

With its deep black body offset, Red Tail Shark (Epalzeorhynchos Bicolor) is a rare species in any freshwater aquarium trade.

Though it’s often mistaken for Rainbow Shark. Coincidentally, both belong to the Cyprinidae family. But they are two separate breeds.

Also, Red Tail shark’s dorsal fin is similar to the appearance of a carp. This qualifies the origin of its name.

Its body is long, slender, with a crushed side, and a curved back. And for its head, it has red-eye, with its mouth having two pairs of barbs.

As a result of this shape, it helps it scrape algae from the bottom of the tanks.

Remarkably, when they feel stressed, you will notice their red tail fade in color.

At birth, you may not be able to differentiate between the male and females of Red Tail shark.

At sexual maturity age, you will notice its fatter and rounded abdomen.

More so, their maximum growth length is 6 inches. Although, some grow around 5 inches long

As earlier mentioned, Red Tail sharks are mostly found in freshwater algae ponds in Thailand. And, during the raining season, they would inhabit the streams, bottomlands, and forest areas.

As an active fish, it spends the majority of its time “busy.”

Over the last decade, many wild populations of Red Tails were eliminated due to excessive poaching and industrial-grade farming.

Thus, according to IUCN ( a global union of states, governmental agencies that assesses the conversation status of species), it is now listed as “Critically Endangered.”

However, with the recent thrive in the aquarium trade, it is evident that the Red Tail shark is still in existence.

As species known for being territorial (more on this later), you should ensure that juveniles have a tank sized at least 29 gallons. And, adults placed in at least 55+ gallons.

Also, try to split the tank up to limit the amount of territorial behavior. Thus, helping to protect timider tank mates.

Of course, Red Tail sharks are not compatible with Rainbow sharks when kept in the same tank. So, we advise using separate tanks.

To split up the tank, use caves and driftwood. Even more, ensure enough planting within the tank.

Additionally, be aware there could be jumpers in the tank. Therefore, using a heavy lid would be a wise decision.

What Type of Substrate Can a Red Tail Shark Survive On?

As a result of their delicate skin, Rainbow sharks prefer sand as substrates to gravel. More so, sharp rocks may scratch their bodies since they are often active at the bottom.

They prefer slower-moving water and streams in their natural habitat. So, moderate water flow is suitable for their aquarium.

Red Tail sharks are omnivores. And in the wild, its diet is mostly plants, crustaceans, and other small insects.

On the other hand, they also scavenge. As such, they feed on dead aquarium fish. Therefore, you can feed them flakes, pellets, lice, and frozen foods.

Their major diet should comprise of a high-quality pellet. And, endeavor to mix it with meats, plants, and vegetables. ( we discussed that in details therein)

For the meat, you can feed them:

For plant and vegetables, you can feed them:

Before you feed them with vegetables, always wash them beforehand. Also, quickly remove the remainder from the tank once they finish eating to avoid decay within the tank.

Also, they feed on algae. And, you may often see them scraping algae from stones in your tank. All the same, plants and vegetables are their favorite.

Furthermore, remember to switch up their diet regularly. And to save costs, you might also be making their food on your own.

Store Foods You Can Buy for Your Red Tail Aquarium Pet

This food is a great source of protein for any Red Tail shark. It is also ideal for a variety of tropical fish with a pellet size and other medium-sized fish.

The Wardley shrimp pellet is made of a mixture of protein and some other plant matter. Moreover, they sink to the bottom of the tank —an ideal opportunity for the sharks.

Unlike the sinking pellets, these are floating pellets. Nutritionally, this goldfish is high in protein. But note that Red Tail sharks also feed on plant matters, so there is a need for some veggies in this diet if you are using this food.

This is a floating pellet with a good level of proteins and plant matter in it. It is a portion of well-balanced fish food.

Just as the name implies, it enhances their color explicitly. Even more, a balanced diet and the ideal food for most tropical fish.

Another well-balanced diet with high levels of proteins and plant matter. It floats along the top of the water, and won’t cloud your tank.

It also enhances the color of your pet shark. And, contains vitamins, minerals, and other essential nutrients beneficial to fish growth.

How often should I feed my Red Tail shark?

As a rule of thumb, feed them at least twice a day. It helps prevent them from being overhead and cuts down possible waste buildup in the water.

All listed food is a well-balanced diet. Whichever one you buy, make sure your shark likes it. Always keep an eye on its movement and make sure it does not fall sick, move sluggish, or lose its color.

Red Tails are often aggressive. More so, they are quite territorial. As such, it may not find it funny with any fish that trespasses or disturbs its feeding session.

Though it may not attack or kill the fish but will chase it till exhaustion. This may cause some tank mates to die as a result of malnutrition.

Hence, they are not always compatible with other fish in a community tank. And, if you insist on keeping it with other fish, you need to be careful with your selection.

Therefore, its ideal tank mates should be fast and robust. And then, they will mostly spend their time in the upper levels of the water column or in the middle.

Good examples of those fishes are:

Tankmates to avoid include but not limited to

Other sharks with red coloration like Rainbow Sharks and Red-finned sharks should also be avoided. Lastly, avoid docile fish and other relatives. If not, the whole setup may end in tears.

Honestly, Red Tail sharks are aggressively territorial. As a starter, we do not recommend keeping more than one at a time in the same tank.

But if you must, a large aquarium is paramount. Therefore, for any Red Tail species you add, always add at least 39 inches (100 cm) to the tank.

And, to maintain peace within the tank, at least 5 species need to be introduced once. By so doing, you will prevent the “alpha” from attacking the weak ones.

But you see, for most shark enthusiasts such tank size is unrealistic. Hence, the best practice is to keep them alone.

Red Tail sharks are oviparous. So, when the females are matured enough to reproduce, their abdomen turns fatter and more rounded. And that’s the only physical difference between a male and female Red Tail shark.

However, if you plan to breed them in a home aquarium, it is unfortunate there has not been any successful record of breeding Red Tails in a home aquarium. This lies mostly in the fact that they are intolerant toward their kind.

Therefore, we suggest you leave the breeding to commercial shark breeders. After all, these are the people keeping these species from extinction.

More so, to induce mating in mature adults, they make use of certain hormones.

The female Red Tail shark tend to lay eggs in rocky caves. So, once the male fertilizes the egg, it takes the time range of 40 to 60 hours for the fry to hatch. And once they develop, the fry gradually changes from silver color to a shade of brown and finally black.

Afterward, it will take around ten weeks of age for the Red Tail to develop.

Signs of Stress or Ill-health

If you decide to buy a Red Tail shark for your home aquarium, look out for the listed signs. And also, check out the environment of the pet store you intend buying from.

If you find any of the following, you may reconsider buying from the seller. Thus:

Also, try to bring your findings to the notice of the storekeeper. If it is a good store, they will welcome your gesture. And on the same note, make positive changes.

Where to Buy a Red Tail Shark

Most local fish stores have them in stock. You can also buy them from bigger pet store chains. Better still, you can order from online vendors who will deliver to your doorstep.

The two species are often mistaken for each other. Hence, the need to note these differences. Here are some facts to clear the air.

Having read this far, we believe you now know as much as required to keep a Red Tail shark as an aquarium pet. Of course, they will stand out in any freshwater aquarium.

However, aside from their beautiful and entertaining nature, they do pose lots of challenges to beginner shark keepers.

The challenge comes mostly from their territorial nature and large aquarium requirements.

In all, planning is the key to any task. Therefore, plan wisely for your freshwater aquarium pet and enjoy their presence in your home.

We recommend you also take a glance at other Great Freshwater Sharks for Your Home Aquarium. At least, before finally choosing the Red Tail shark.