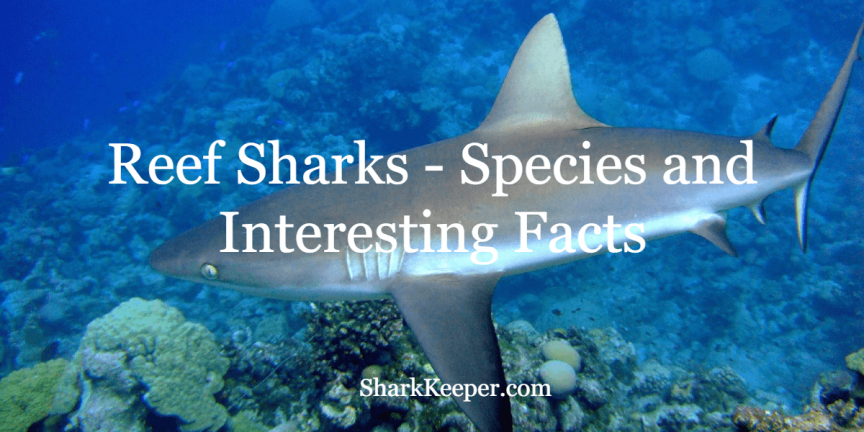 Reef sharks include the different species of sharks inhabiting the delicate coral reefs and its surroundings. These sharks contribute greatly to the reefs ecosystem. They are apex predators within the reef habitat, thus they sit on top of the food chain.

Reef sharks also play a very important role throughout the earth’s ecosystem. Even while the significance of these sharks are rarely noticed, the World Wildlife Fund still listed them as one of the most important extant species on the planet.

While researchers are still trying to determine how many reef shark species exist, increasing fishing and catching of these groups of sharks constantly reduces their population. Not only does this affect their population, but it also threatens the frail coral reef ecosystem. Therefore, the need to care more about the sharks inhabiting the reef.

The Five Species of Reef Sharks

There are five extant species of reef sharks inhabiting coral reefs worldwide. These sharks include:

These sharks have different characteristics unique to them. They grow within the length range of 5 to 10 feet (1.6 to 3.0 m). Their diet consists of mainly bony fishes and other occasional supplements. Reef sharks are requiem sharks belonging to the family Carcharhinidae. They have a typically robust and streamlined shape. Without critical examination, it is difficult to distinguish especially the large members of the family.

Reef sharks generally are robust and streamlined typical to requiem sharks. They have two dorsal fins with the first usually falcate. There may be interdorsal ridge as in the Caribbean reef shark and the silvertip shark. For large species, there may be difficulty in distinguishing them. However, close observation will reveal the differences.

Where Do Reef Sharks Live?

As already attached to their names, reef sharks prefer the tropical and subtropical waters of the coral reefs. These sharks mostly occur in the Indian and Pacific Oceans. They also cut across the Caribbean Sea, the Mediterranean Sea, as well as Japanese waters. Reef sharks are common in shallow waters usually shallower than 260 feet (80 m). Though they can dive to depths up to 2,600 feet (800 m) as recorded of silvertip sharks.

Reef sharks prey mostly on several types of bony fishes inhabiting the coral reef. For example, they feed on tuna, flying fish, mackerel, grouper, soles, lanternfish, wrasses, and escolars. Others that make up the food of this species include eagle rays, cephalopods, and octopuses.

These sharks tend to be more active at night than during the day. Hence, they hunt mostly at night taking advantage of sleeping prey. During the day, they may rest and feed opportunistically.

Reef sharks mostly prefer to stay solitary especially when hunting. However, they also form groups while resting on the seafloor or sandy flats. Often observed piling on top of each other or lying in a supposed parallel arrangement. Sometimes, they collaborate in hunting and successfully blocking off escape paths of prey in a much more group hunting attempt.

These sharks are not generally aggressive and tolerate each other. Although, their aggressiveness tends to increase while feeding, hence more attacks recorded in the presence of food. Also, similar is the case when they venture into the open ocean leaving the confinement of coral reefs. This is common among grey reef sharks and silvertip reef sharks.

The most prominent threat display among sharks is that of the grey reef shark (Carcharhinus amblyrhynchos). Others such as the silvertip reef shark and the Caribbean reef shark also perform threat display. This shows that this behavior is quite common among reef sharks.

Threat display in reef sharks is unique among species. And, they perform this series of stereotypical movements when they feel threatened and about to attack. If the threat persists, these sharks will definitely attack in line with the display.

Mating in reef sharks involves violent courtship where the males bite the females’ fins and body to make her submit to copulation. This behavior often leaves most female reef sharks with injuries and scars.

Gestation in this species lasts up to one year with a biennial reproduction cycle. After gestation, these sharks give birth to only 4 – 5 pups. The size of the pups usually vary in species. The average maturity age is between 5 to 6 years of age. Males tend to mature earlier than females.

Reef sharks’ encounters with humans are mostly divers and fishermen. Of course, they are curious species and do not back away from divers. Instead, they tend to approach divers closely as they enter the water at first. These sharks will observe the divers but tend to lose interest after some time. They will usually react with a threat display ready for attack if divers pursue them.

Encounters with fishermen involve these sharks trying to steal catch from spearfishers and nets. At times, they hit their boats causing damages.

The build and structure of these sharks show they are potentially dangerous and can inflict fatal injuries on humans. Grey reef sharks and silvertip reef sharks pose the most threats to divers, especially when in the midst of food.

There are low records of attacks on humans by these species as assessed by the International Shark Attack File. Moreover, most recorded attacks are not fatal and provoked. This suggests that these sharks do not naturally attack humans, but will only attack if they perceive a threat.

Fisheries in regions where these sharks occur target them for various purposes. For instance, the flesh for food, fin for shark fin soup, the skin for leather, liver oil, teeth, and jaws. Reef sharks are captured in gillnets, trawls, and longlines both as targeted and as bycatch. They also make a good fortune in foreign markets.

There are several conservation actions put in place to control the rate of fishing of these species. Hence, saving them from further decline in population. While these actions are working, it is still not enough as more stringent measures need to be adopted.

Reef sharks are amazing species inhabiting coral reefs and occupying the top of the food chain. The five species under this group have unique characteristics worth learning about. Thus, to know about reef sharks is to acquire further knowledge of the individual species.