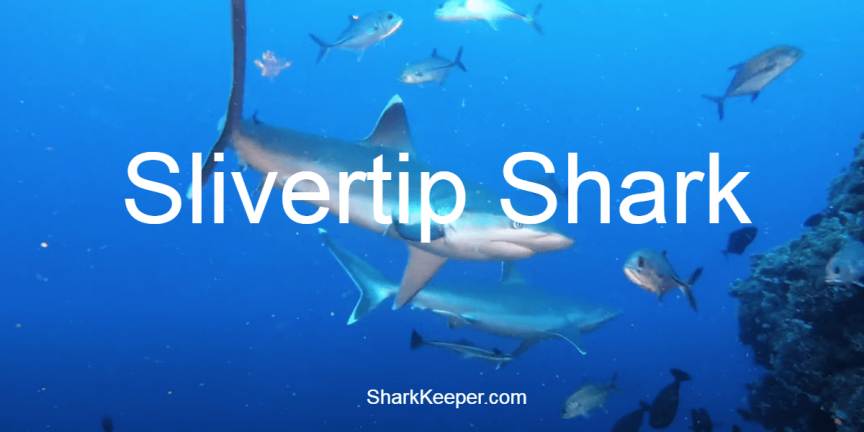 The silvertip shark (Carcharhinus albimarginatus) is a species of large requiem sharks. They are from the family Carcharinidae. These sharks have other common names such as silvertip reef sharks, whitefin sharks, and white fins.

These sharks inhabit the tropical Indian and Pacific Oceans. They exhibit fragmented distribution in these regions. And, more likely to occur in coral reefs and around offshore islands.

With its size, the silvertip shark is an apex predator feeding of a variety of bony fishes, cephalopods, and smaller sharks. There are a lot more features that distinguish this species from other reef sharks.

Upon discovery, the German naturalist Eduard Rüppell described the silvertip shark originally in the 1837 publication Fische des Rothen Meeres (Fishes of the Red Sea) as Carcharias albimarginatus. Later, the genus name was changed to the currently valid Carcharhinus.

The specific name is from two Latin words albi and marginatus. Where albi means “white” and marginatus means “to enclose with a border”. This epithet references the white margins of the silvertip shark’s fins.

The type specimen for this species is an individual caught in 1960 off Ras Muhammad in the Red Sea. This was an immature male that is 3.38 feet (103 cm) long.

The grey reef shark is the closest relative of the silvertip shark as proposed by Garrick (1982), after studying the similarities in morphology, vertebral characters, and tooth shape. Supporting this interpretation is Lavery (1992), with evidence from allozyme data.

How to Identify a Silvertip Shark

Silvertip sharks appear streamlined and robust. They have a slightly long, broad snout. Their eyes are large and round. They have five pairs of short gill slits.

This shark has a long and triangular first dorsal fin originating over or slightly forward of the tips of the free pectoral fin. Between the first and second dorsal fins is the interdorsal ridge. The pectoral fins of the silvertip shark are longer in proportion than in most other requiem sharks. They have pointed tips and are falcate (sickle-shaped).

Both the upper and lower jaws of this shark have about 12 – 14 tooth rows on each side of the jaws. Then, at the symphysis (middle of the jaws) are 1 – 2 small teeth. Teeth in the upper jaw are broad with oblique triangular cusps and coarse serrations near the base. While the lower jaw teeth are with erect cusps and fine serrations.

Silvertip sharks are blue-gray in color on their dorsal side, while the ventral side is white. There is a subtle white band running along their sides. All their fins are marked with a characteristic white tip and margin.

Habitat and Distribution of Silvertip Sharks

Silvertip sharks prefer habitats over continental and insular shelves. They mostly occur at depths between 98 to 2,625 feet (30 to 800 m), while occupying all levels of the water column. These sharks are common around coral reef banks, reef drop-offs, and isolated islands. Juvenile Silvertips frequent coastal shallow or lagoons, while adults tend to remain in much deeper water. As a result, there is a little overlap between the two age categories.

These sharks are widely distributed in the tropical Indian and Pacific Oceans. However, their distribution is not continuous but fragmented. Thus, the occurrence of silvertip sharks in the western Indian Ocean ranges from the Red Sea toward South Africa including Seychelles, Madagascar, the Aldabra group, the Chagos Archipelago, and Mauritius.

In the western Pacific Ocean, this species occurs from southern Japan to northern Australia including the Philippines, Indonesia, Taiwan, New Caledonia, Papua New Guinea, Guam, the Marshall Islands, Tahiti, the Solomon Islands, and the Phoenix Islands.

Silvertip sharks also occur in the eastern Pacific from southern Baja California to Colombia including Galapagos, the Cocos, and Revillagigedo Islands. There are reports, however, unconfirmed of these species present in the Caribbean and the Gulf of Mexico.

These sharks tend to move, though, in certain areas, they show home fidelity. There are reports of this species exhibiting territorial behaviors. Silvertip sharks are usually solitary or found in pairs. Small groups of adult females have been found in deep waters.

Individual species are very aggressive towards each other. As a result, many bear heavy scars on their body. Reports suggest that this species shows dominance over blacktip sharks (C. limbatus) and Galapagos sharks (C. galapagensis) of similar sizes when competing for food.

Silvertip sharks just like grey reef sharks sometimes perform a stereotypical threat display when pursued by divers. This display serves as a warning that they are about to attack. The display starts with the shark swimming away to a distance of about 49 feet (15 m) before turning to charge against the threat perceived.

After swimming a distance of about two body lengths, the shark slows while turning broadside, dropping its pectoral fins, opening its mouth wide, lowering the posterior two-thirds of its body, and then shivering. The last two parts of the display are unique to the silvertip sharks. This shark shivers to probably emphasize the white markings on the fins.

In case the threat persists, the shark is most likely to end up closing in rapidly on the diver and slashing with its upper teeth.

Interaction with Other Species

Silvertip sharks sometimes form aggregations of mixed-species with grey reef sharks. Fish such as Rainbow runners (Elagatis bipinnulata) are observed rubbing against the rough skin of these sharks to scrape off parasites.

In open waters, they tend to at times follow marine mammals like bottlenose dolphins (Tursiops sp.). And, in turn, pilot fish (Naucrates ductor) follows them.

When attacking large prey, their differently shaped teeth on the upper and lower jaws help them to grip and with violent twists and turns, saw off chunks of flesh. When observed, silvertip sharks tend to swim around the periphery of groups of feeding sharks, dashing in occasionally to steal food.

Silvertip sharks display violent mating ritual which involves the male biting the female to make her submit to copulation. A female once observed, had the tip of her first dorsal fin bitten off from such violent courtship display. Mating and parturition in the southern hemisphere take place during summer.

The reproduction cycle of silvertip sharks occurs biennially with gestation taking up to one year. Just like other requiem sharks, this species is viviparous where the developing embryos are first sustained in a yolk sac. However, when the yolk content exhausts, the sac transforms into a placental connection through which the embryos now get nourishment from the mother.

This is the process of giving birth to young ones. Thus, after the one year gestation period, the female silvertip shark bears a litter of usually 5 – 6 pups. At birth, the pups measure 25 – 27 inches (63 – 68 cm). The young prefer shallower water than adults.

This shark species are considered potentially dangerous to humans. They are curious and bold, especially when feeding. Often when divers enter the water at first, many Silvertips rush up from deep water to check the divers which can be quite frightening. And, they are likely to approach very close.

silvertip sharks tend to circle and pursue divers occasionally. In fact, an experiment involving bait, with a dummy dressed in scuba gear suggests that this species can inflict lethal injuries. A large silvertip shark tore off the leg of the dummy.

The International Shark Attack File (ISAF) as of 2008, attributed four provoked attacks on humans to this species. None of these attacks were fatal.

Humans take this shark especially for its fins highly valued for shark fin soup. Also, they sell on the export market along with the cartilage and skin. The local market sells the meat fresh or dried and salted, this also goes with the jaws and teeth.

Commercial and artisanal fisheries catch this species across its distribution range in longlines, trawls, and gillnets. They catch them both intentionally and as bycatch. It is also an increasingly important catch of pelagic fisheries, which often, they fin these species at the sea.

Due to their slow rate of reproduction and choice in particular home range, silvertip sharks are susceptible to overfishing. To a large extent, this species suffers a heavy decline in population. Thus, the population inhabiting the Scott Reef off northern Australia is believed to have been extirpated by Indonesian artisan fishers. Moreover, in many other parts of its range, this shark is likely becoming rare.

The International Union for Conservation of Nature has assessed the silvertip shark (Carcharhinus albimarginatus) as “Vulnerable (VU)”.

1. The Silvertip Sharks has Striking Resemblance with the Grey Reef Shark

Apart from being larger and bulkier, silvertip sharks have the body build of grey reef sharks (C. amblyrhynchos). Moreover, the grey reef shark is the closest relative of this species.

All the fins of this shark have prominent white markings at the margins. This is the first noticeable difference between this species and other reef sharks.

3. They are Potentially Dangerous to Humans

Silvertip sharks are aggressive especially in the presence of food. They have the tendency to inflict lethal injuries on humans as shown by an experiment.

4. There are only a Few Records of Attacks on Humans by this Species

In fact, ISAF as of 2008, listed only four provoked attacks on humans by the silvertip shark. Though, none was fatal.

5. The Favored Prey of Silvertip Sharks are Bony Fish

This shark species feed mainly on bony fish such as mackerel, tuna, grouper, wrasses, and flyingfish. However, they still supplement with octopuses, eagle rays, and smaller sharks.

When pursued, this shark will perform a display showing its readiness for an attack. If the potential threat persists, the silvertip shark most likely attacks by slashing its upper teeth. This species’ display is unique to them.

Silvertip sharks choose certain areas and remain faithful to it. There are also reports of territorial behavior from these sharks.

8. They Engage in Violent Mating Ritual

The male bites the female to hold her down for copulation, hence inflicting injuries on her. Observation showed a female once lost the tip of her first dorsal fin from such activity.

When divers first enter the water, several Silvertips tend to rush up to inspect them. At times, they circle the divers and even pursue them.

10. The Conservation Status of This Species is Vulnerable

The IUCN listed the silvertip shark as Vulnerable due to the increasing decline in population in their range. This is a result of overfishing by humans.