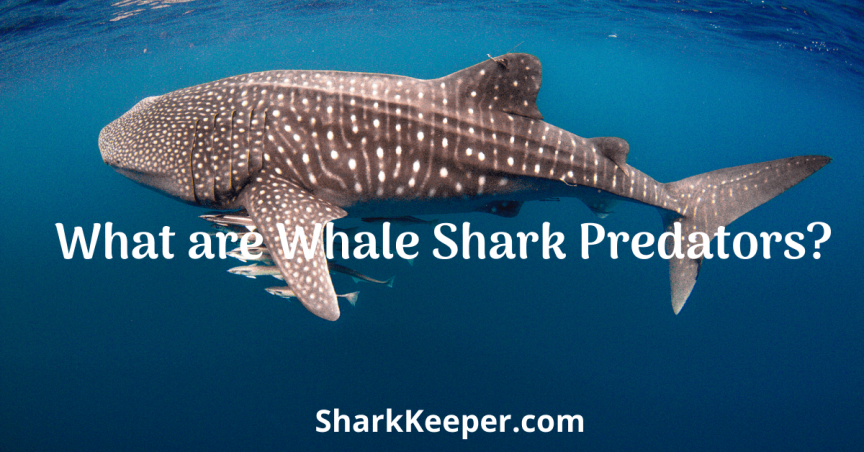 The whale shark is the largest fish in the ocean. Knowing this can make you wonder if they ever have predators. Or, you could begin to think that they should be the apex predator. Hence, they should not fall prey to any other species or creature.

Shedding light on the topic “whale shark predators”. Whale sharks are slow and fall prey to several creatures. They don’t even attack back since they are filter-feeders. It is a tough one with their large size and plenteous teeth to fall prey. However, the whale shark is often prey to a variety of fish that includes sharks, blue marlins, killer whales, and the ultimate – humans.

The adult whale shark has little to fear from predators. But, the sick, old, and small ones easily form prey.

Let’s find out more about why whale sharks having predators and why it makes sense.

What Does A Whale Shark Eat?

The name ‘whale shark’ is misleading; it is a fish and not a whale. The large size and plenteous teeth would suggest that these creatures are sadistic hunters like other sharks. But, this species of sharks is a filter feeder.

Whale sharks survive on a diet mainly consisting of plankton, as well as other smaller prey like jellyfish, crab, squid, mackerel, and krill.

Being filter feeders mean that whale sharks just open their mouth and swim, allowing everything into their mouth. Once the whale shark has a mouthful of food, it closes its mouth. It then allows the water to go out through its gills. They do not eat foods that have grown big for them like squids and crabs

Humans are not on the menu of any shark; this means that the whale shark does not hunt humans. Their plenteous teeth are not even actively in use to hunt prey in the ocean.

What Kills A Whale Shark?

Considering the size of these fishes, it is pertinent to know what can kill them. These fishes are so large their size is relative to the size of a school bus. That gained it the title of it being the largest fish in the world.

Well, other species of sharks like the great white sharks, tiger sharks, and killer whales also known as orcas can kill a sick, small, younger, or older whale shark that’s already weak to attack. The big and healthy ones are too much a challenge to take on.

Like most sharks, whale sharks have more to fear from humans than humans have to fear. Humans are not on the menu of sharks. But, humans can hunt a whale shark for its flesh, oil, and fins.

How Does A Whale Shark Reproduce?

In as much as the whale shark is so large, it can become evasive when they don’t want to be seen. They definitely do not want to be seen whilst they reproduce; thus, their mating behavior is uncertain as it has not been seen.

Researches however suggest that a shark should be up to 25 to 30 years old before it would be ready to produce.

The whale shark is ovoviviparous, meaning that their eggs hatch inside of them like egg capsules with enough nutrients in the yoke. Once the pup is out of the capsule it continues to get nourishment inside the mother.

When the pups gets enough nourishment, they are then born. They can also store sperm to use later in fertilizing another egg.

Life isn’t all mother and child after the birth of these young sharks, as the pup begins to take care of itself immediately after birth.

How Long Can A Whale Shark Live?

Sharks are built for survival and kill making them the ocean’s apex predators. The whale shark’s lifespan is not clearly known but it is estimated to be able to live for 70 years. Some can live for over 100 years to maybe 130 years. That’s really long.

The fact that the whale shark can live for that long makes it one of the sea’s longest-living creatures. This is alongside the green sea turtle that can live for up to 80 years, the blue whale 80 – 90 years, Greenland shark – the longest living shark at 400 years. See source

The population of the whale shark is decreasing from the continuous preying on them by other sharks and humans hunting them.

They are hunted for their fins, their oil,, and flesh. Their hunt by humans got so extreme that some countries have banned or regulated the hunt of these sharks, sadly, these hunts still happen.

This is one frequent question fish lovers and ocean divers ask, just so they know if they are safe from a whale shark.

The whale shark is a shark; sharks do not have humans on their menu, so they do not hunt humans.

The recorded shark attacks on humans are accidentally caused by the shark’s curiosity to know what’s in the water. Sharks are drawn by brightly colored swimsuits, jewelry, humans splashing water, etc.

Whale sharks are not dangerous to humans and sometimes interact with divers or humans on a boat. The gigantic size of these creatures can say otherwise about them but divers often describe young whale sharks as being playful.

Here is the surprise; whale sharks are one of the nine animals that aren’t as dangerous as we think. The highest form of risk they pose to humans is swatting divers who swim close to them with their tails – accidentally.

How Fast Can A Whale Shark Swim?

Sharks are known to be fast swimmers, a top skill in their arsenal when they hunt or try to escape danger.

Unfortunately, the whale sharks are slow swimmers that can only swim three miles per hour whilst a shortfin mako shark can swim 45 miles per hour.

Most humans swim at a rate of two miles per hour which means that snorkelers could keep up with a whale shark.

American swimmer, Michael Phelps at a time reached six miles per hour. This means that he would beat a whale shark in a sprint. See.

How Does the Skin of A Whale Shark Look?

The patterns on whale sharks are like the human fingerprint – unique to each fish, none is ever the same. Along with three ridges across each side of their body, the whale shark’s skin pattern is distinct white spots and stripes against their dark blue/grey skin, their belly is usually white.

For the fun part of the whale shark’s skin, it is thicker and tougher than that of any other animal in the world. This makes possible predators limited. Check Source

The whale shark has a similar body structure to a catfish but unlike the catfish, whale sharks have very large mouths about 5 feet wide (1.5 m) with over 300 rows of tiny teeth and 20 filter pads.

How Does Whale Sharks Protect Themselves?

With the size of a whale shark compared to a school bus and its 300 tiny rows of teeth, the whale shark does not need protecting you would think. Anyways, you are wrong; the whale shark needs to protect itself from its predators that include humans and other sharks.

Unlike other sharks, the whale shark does not actively use its teeth, so that’s not in their arsenal when it comes to protecting themselves.

The whale shark depends solely on its thick skin and large size for protection against its predators like other filter feeders – the megamouth shark and the basking shark.

Luckily, they have also gotten the protection of the government. Many countries ban or regulate the hunting of these sharks as they are nearing extinction. In the Atlantic and Pacific oceans, there’s been a great decrease in the number of this species of fish. Check source

Ultimately, we got to know the whale shark predators. For ocean divers and swimmers, fear not, whale sharks cannot eat a person even with their large size because they have a small throat and humans are originally not on their menu.