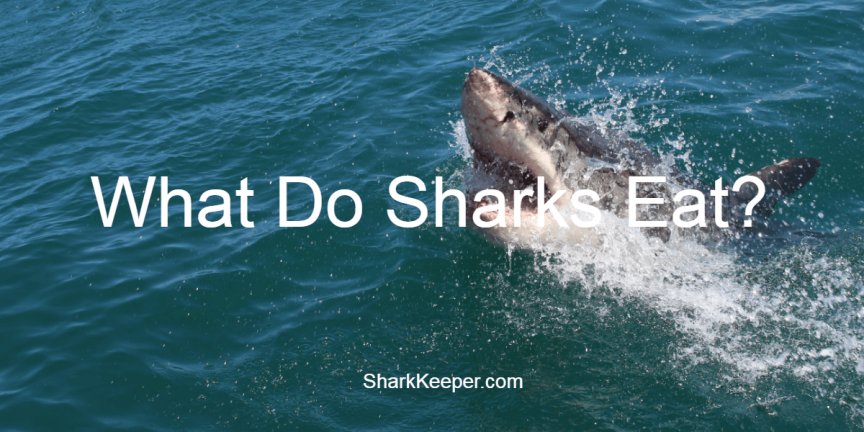 You may have been wondering what sharks eat. Do they only ever eat seals or do they dine on other sea creatures? this article will answer this question and more.

Still to come, we will take a look at what great white sharks eat, how sharks eat their prey, and what other types of sea creatures they choose to eat.

How Much do Sharks Eat?

The answer to this question depends on the species of shark. Nurse sharks, for example, eat a very small amount of food every day. However, large sharks such as bull sharks and tiger sharks eat large amounts of food.

Great white sharks can go up to a week without food. They travel long distances to their feeding grounds. When they arrive at the feeding grounds they eat seals. Some sharks eat up to 20% of their body weight in seals.

Goblin sharks that live in deep water survive by eating food waste. This consists of the carcasses of other sea life. Surprisingly, they tend to eat very infrequently. Impressively, they have a very slow metabolism. This means it will take a while for the food to digest. Without a doubt, this means they won’t go hungry.

Great white sharks like fatty meals and will, therefore, consume sea lions or a seal. Seals, for example, can be up to 50% fat. This makes them ideal for sharks. Great white sharks will also eat fishes and occasionally sea turtles.

How do Great White Sharks Hunt?

Many sharks have very effective ears and noses which help them to hunt. Interestingly, great white sharks use their sight to help them hunt. Amazingly, they swim close to the bottom of the sea bed. They look for seals on the surface of the water. Once they have spotted a seal they will swim upward very quickly. The speed is such that the seal cannot escape. A shark can reach the surface of the water in just 2 seconds.

What is the Great White Shark’s Favorite Food?

How Many Teeth can a Shark have in its Lifetime?

30,000. This is because sharks lose their teeth from time to time. Some sharks have a few hundred teeth other sharks only have 12 teeth. Incredibly, some sharks can have two to three rows of teeth on their lower and upper jaws. Their teeth don’t have any roots. This means they can easily break off. Some teeth might only last one week.

No. They are usually a shade of white. However, when they lose their teeth they will become buried in sediment. The teeth will absorb some of the surrounding minerals. This is what turns their teeth black.

If you were to find white sharks teeth it means they were lost quite recently. It also means they have not found their way into the sediment as yet.

No. Sharks much prefer to eat squid, crustaceans, fish, seals, and sea lions. However, it has been known for an octopus to eat a shark. When an octopus consumes its prey it suffocates it. This, therefore, means an octopus can potentially eat a shark. Interestingly, the shark will have to be a small species of an infant. An octopus is unlikely to be able to eat a large shark.

Yes. Tiger sharks will eat just about anything. Young tiger sharks swim close to the shore late at night and will feast on jellyfish among other sea creatures. Interestingly, during the day they will swim back into deeper waters. Tiger sharks will also eat mollusks and small fish.

No, not naturally. However, some divers will feed sharks lionfish. This is because lionfish are quite invasive. They are also fed to reef sharks. Sharks are capable of eating lionfish without getting ill as the fish are not poisonous.

Yes. Large sharks like to eat calves. This is because they are the most vulnerable and weakest. However, they will not try to attack fully grown dolphins. This is because dolphins can swim very quickly and they’re quite powerful. If a dolphin were to deliberately swim into a shark the force could kill the shark. This is why many sharks try to avoid fully-grown dolphins.

Yes. They do this because they often eat the same food. Many people assume that it’s safe to be around dolphins because they will scare the sharks away. The sharks might keep their distance but they can still be close by.

Yes. Many sharks have evolved to eat turtles. They have the ability to break through the turtle’s shells and eat them. The shark simply needs to shake its head while it has a grip on the turtle. This will allow its teeth to cut through the shell as they have a serrated edge.

Can a Shark Bite through a Turtle’s Shell?

Yes. This is because a sea turtle’s shell is much softer than that of a land turtle. This ensures that sharks and whales can bite through the shell before eating the turtle. However, sharks much prefer to eat seals and sea lions as they contain a lot more blubber.

Yes, even though puffer fish are full of toxins. This means that some animals can eat them. However, not all puffer fish are poisonous which means they can be preyed upon by sharks. Sharks much prefer to eat seals and sea lions as they contain a lot more blubber. However, if they were hungry and came across a puffer fish they might decide to eat it.