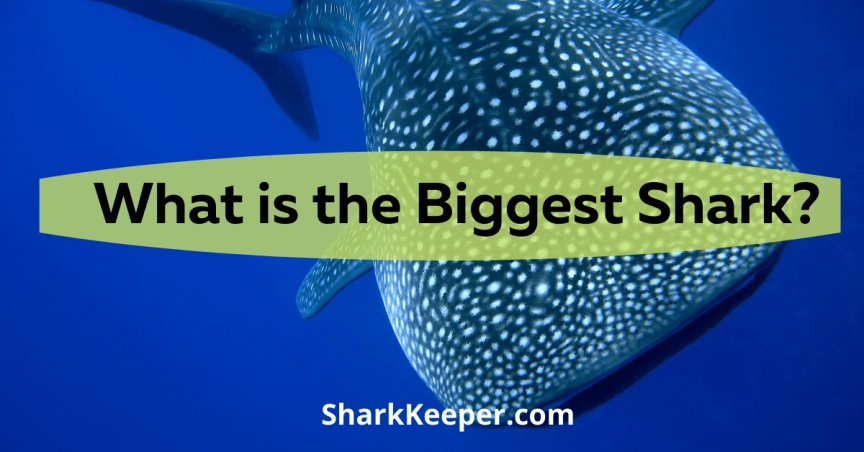 When it comes to sharks’ sizes, you probably think nothing could surprise you anymore. Then you hear some are way bigger and probably more dangerous than the ones you know already. The curiosity pops in, and you start asking questions like, which is even the biggest shark in the world?

There are a lot of amazing facts to find out about whale sharks. However, let’s look at their general features first.

These sharks’ bodies have the shape of a torpedo, and they have a pointed snout. Unlike most sharks, their head is flattened, with their mouth located in front. Apart from their vast size, you can also differentiate whale sharks from other sharks by the markings on their body.

They have prominent ridges of hard tissues called keels. This extends horizontally along each side of their body.

A little bit above the pectoral fins, Whale sharks have five gills on each side of the head. They also have a short rudimentary sensory organ called “barbell hangs” in each of their nostrils.

Where Can Whale Sharks be Found?

You will mostly find whale sharks in warm waters. They inhabit all the warm waters around the world. Whale sharks also inhabit the western Atlantic Ocean.

Their habitat ranges from the coast of New York to Brazil, to the Gulf of Mexico, to the Caribbean Sea. In the east Atlantic, you will find them around Senegal, Mauritius, Cape Verde, and the Gulf of Guinea. These sharks also occur in the Indian ocean and the central and western pacific.

Whale sharks are the biggest sharks in existence. They can grow to as long as 40 feet, but their average size is usually around 25 feet.

Due to their enormous size, whale sharks can weigh up to about 15 tons. Whale sharks have unique markings all over their body that serves as a means of identification.

These markings can either be random stripes or dots. The purpose of these distinctive spots on their body is still unknown.

Though we know disruptive markings in bottom-dwelling sharks were mostly a way to camouflage themselves from predators when underwater. But as it appears, whale sharks don’t need to disguise themselves from any predator.

However, many have assumed that their markings can be due to evolutionary relationships with bottom-dwelling carpet sharks.

Whale sharks have 20 filtering pads in total next to their pharynx. Ten on each side. These pads allow them to filter a lot of plankton up to about 20,723 in a day

Whale sharks have tooth-like scales structures with a strong central keel that is unique to each one. Hence, their denticles are hydrodynamically essential in their pelagic lifestyle.

What are Whale Sharks’ Parasites?

Parasitic copepods are common parasites of the whale shark.

Are Whale Sharks Common in Aquariums?

Whale sharks are not so common in aquariums, Although, there are few aquariums that keep them. Due to their large size and specialized feeding requirements, many aquariums shy away from owning them.

Also, there are oppositions to keeping whale sharks in aquariums due to the early death of some previous ones.

Despite these sharks’ enormous size, they do not attack humans. In fact, they are one of the friendliest sharks in existence. Naturally, this shark species is docile and even allow swimmers to catch a ride sometimes.

Their juveniles are gentle and don’t shy away from playing with divers. As a result, there are photographs of humans swimming close to whale sharks without any form of threat to them.

How Do Whale Sharks Eat?

These sharks are one of the three filter-feeding sharks in existence. While the other two are basking sharks and megamouth sharks. Whale sharks feed near or at the surface of the ocean. Their big mouth that contains about 300 rows of nail-like teeth totally adapted for filter feeding.

They swim with their mouth open, which allows seawater to enter it. Subsequently, the mesh-like tissue in their internal gills serves as a sieve to filter planktons or other small organisms.

Sometimes, whale sharks feed with their tail down and open their mouth pointing upward. This allows water and little micro-organisms to fall into their mouth and then later filter it.

How Do Whale Sharks Reproduce?

Little information is available about these sharks’ mating behavior. This is because there are only very few studies of this shark species in the wild.

How Do Whale Sharks Behave?

Whale sharks are solo hunters, but they don’t mind sharing their food with others of their species. Juvenile whale sharks often hang out in the red sea to eat and socialize.

Only little is known about whale sharks’ social habits. This is also because there are no extensive studies on them like other shark species.

When Were Whale Sharks Discovered?

Andrew smith discovered whale sharks in 1828 after he caught a specimen in table bay in south Africa.

Whale sharks’ first scientific printing was “Rincodon”. However, later in 1984, the international commission on zoological nomenclature changed it to “Rhincodon” and the family name to “Rhincodontidae.”

What Is the Importance of Whale Sharks to Humans?

Whale sharks mostly come as bycatch for fisheries. They are also part of the national and international trade, keystones of marine tourism.

In the Indo-pacific, the number of whale sharks targeted by fisheries annually witnessed a significant increase. This is due to their ever-growing economic value.

The fins of whale sharks hold high value in the market. However, it is rare to find them. But, when you do, it is usually highly-priced and sought after.

Due to how people find their fins, fisheries began opportunistic finning of these sharks, including India and Japan.

While India placed a ban on the finning of sharks, it still happens in many countries not protected by law.

The liver oils of whale sharks serve as raw materials for waterproofing appliances including fishing boats. Other uses are as a cure for some skin diseases and sometimes for the production of shoe polish.

Whale sharks often provide a source of tourist attraction for commercial tourists. Especially, in some locations where it is possible to predict the appearance of this shark species.

Why Are Whale Sharks Endangered?

IUCN listed whale sharks as Vulnerable (VU). Under the American Fisheries Society (AFS), Whale sharks appear as conservation dependent in the Atlantic and Gulf of Mexico and even the U.S.

In the Philippines and Maldives, there is a law protecting the fishing of whale sharks in all the geographical areas.

All these protections were due to the severe impact the action may cause on whale sharks’ population.

Moreover, a recent discovery shows an increasing decline in most of their habitat due to overfishing. Hence, all the threats to these sharks include vessel strikes, fisheries, poorly conducted tourism, and bycatch.

What Is the Biggest Shark to Ever Live?

The biggest shark thought ever to live was the “Megalodon shark”. It is an extinct species of shark that lived 20 million years ago. The discovery of the Megalodon occurred through fragmentary remains.

The Megalodon is still estimated to be bigger than whale sharks, which is the biggest shark in existence now. Though, scientists are quite uncertain about its appearance and maximum size.

The Megalodon was first thought to be closely related to great white sharks. However, a discovery classified it among the extinct family of the Otodontidae.

Whale sharks are the biggest shark in the world. Although people confuse these species for whales, which are mammals, they are not whales.

Even though these sharks are the biggest shark in the world, they are slow-moving and filter feeders.

Whale sharks have a great life span. As a result, they can live up to 100 years or more.

They usually get to about 30 years old before they reach sexual maturity. Like most sharks, their females are larger than their males.

Whale sharks are ovoviviparous, meaning they lay eggs that remain in their body until it hatches and then give live birth.

The Whale shark is currently Endangered species due to overfishing and are now under the protection of different laws.

Whale sharks are present in some public aquariums.

The Whale shark is the biggest extant shark species. We also discussed some of this shark’s important features.