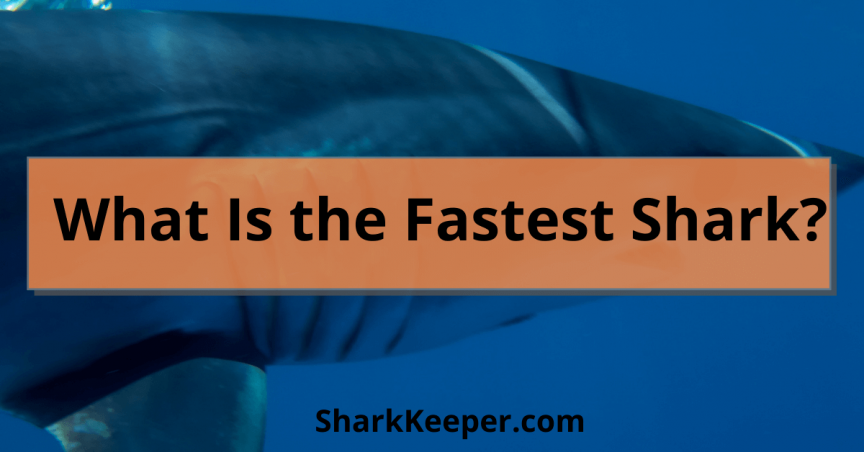 Lit up your fascination the more by knowing the fastest shark in the ocean. You might have a thing for Michael Phelps. While he is great, these creatures have taken our idea of speed to a different level. Let’s get to know them.

Still curious about the fastest shark? The fastest shark in the ocean is the short fin mako shark (Isurus oxyrinchus). This intriguing athlete is the fastest of makos which are of the mackerel family. And, also of all the sharks in the sea.

Let’s break every single of them down.

How Fast Is the Fastest Shark?

The shortfin mako shark like most other sharks can swim levelly at a speed of 1.5 mph (2.4 kph). Under moderate conditions, they can reach 5 mph. This happens when they chase nothing. If you are a good swimmer you can beat them at their leisure speed. It takes you to be an Olympic swimmer to do so under moderate conditions.

So, what does that mean for you the great swimmer? It means that the shark’s speed is 10times greater than whatever speed you have. You are no match for it. This is except you are on a jet ski or speed boat.

What Makes the Short Fin Mako Shark the Fastest Shark?

Torpedo body shape: The well-streamlined body helps them glide through the water with reduced resistance. Know that the resistance in water is greater than that of the air. Water is denser than air.

Large lunate tail: It moves side by side to help propel the body of the shark faster in water.

Ram breathing: Most sharks aren’t naturally buoyant in water. They need to keep swimming to get oxygen. If they don’t do so they sink and suffocate. If you swim to live. Then you will swim better!

Endothermic nature: They generate internal body heat. This form of energy energizes their body to do more.

Finally, the skin of the Shortfin Mako Shark isn’t entirely smooth as it seems. Run your finger from the tail to the head you will notice. They are made of tiny loose teeth known as dermal denticles. They are 0.2 mm in length. And, serve to put up resistance against drag. This results from the reverse flow of water.

It is known as flow separation. As such, Shortfin mako sharks glide even more easily through the water.

Since it is from the mackerel family. It has a pointy snout earning it the name (Oxyrinchus). Normally adults reach 10 ft (3.2 m). And weighs 60 – 135 kg. Larger females can reach up to 12 feet (3.8 m). The largest recorded is 14.6 ft. The body’s length is long and shaped like a cylinder. It narrowed into a tail shaped like a crescent moon. And of course, the glaring short pectoral fin.

While the back area is shiny blue in color. The underbelly is white. The mouth area is also white. Bigger specimens are deeper blue in color.

Why Is the Short Fin Mako Shark Considered the Fastest Shark?

It is currently the fastest shark because it is able to attain a maximum speed of 60mph (96kph). This is yet to be recorded amongst any other species.

Research from New Zealand lends credence to this fact. The shortfin mako shark can accelerate from a dead stop to reach 100 feet (30.5 m) in 2 sec.

The closest contender salmon shark can reach a maximum speed of 50mph. This is lesser than that of the Mako Shark.

Also, the shortfin mako shark is a top predator in the ocean. It has many of the fast fish in the ocean in its meal plan. e.g. swordfish and tuna. A swordfish fish for instance can attain a speed of 60mph. For a shark to eat a fish that can achieve that feat. Then it must possess the same speed or even greater than, don’t you think?

What Is the Fastest Shark Alive?

What Is the Fastest Speed A Shark Can Swim?

The fastest speed a shark can swim will be 60 mph (96 kph). This was recorded from a shortfin mako shark. The fastest shark in the ocean.

What Is the Second Fastest Shark?

While some sharks are quite fast. Salmon sharks clinch second place here. It can clock a maximum speed of 50 mph (80.5 kph). It possesses certain similar features to the Mako Shark that aids its fastness. E.g. streamlined body shape, narrow head, and powerful keel with skin covering that helps reduce drag.

And, their internal temperature is raised up to 10 degrees than their surroundings. This helps them fare better in their very cold habitat of the Northern Pacific Ocean. Like the shortfin mako shark, they also belong to the mackerel family.

What Is the Top Ten Fastest Shark?

Although the fastest known shark species may not be up to ten for now. Here are the top six, worthy of your note. They include:

Is the Fastest Shark Dangerous?

The Shortfin mako Shark is fairly large amongst sharks. However, it is way larger than humans. Considering that it is large, speedy, and a carnivore. The sharp pointy teeth alone will make this clear to you. It has every tendency to attack humans.

However, over 3 – 4 centuries ago. The recorded attacks from a shortfin mako shark are only close to 9. Though it’s a deep-sea swimmer. More recent attacks are recorded of fishermen who provoked it.

It is the combination of sudden bursts of speed. And, it’s constant cruising speed that makes it go this far. So, the mako shark is still amongst the fastest over long distances.

What Other Athletic Features Does the Fastest Shark Have?

Apart from being the fastest swimmer. Shortfin mako sharks have excellent jumping skills. It can take advantage of one of its sudden bursts of speed and leap very high into the air. This skill is known as breaching.

Though it isn’t known why it does this. Some studies suggest it wants to get hold of prey like birds. They normally perch on the ocean surface.

Is the Short Fin Mako Shark Faster Than A Boat?

This depends on the boat you are traveling with. While the shortfin mako shark can outrun a simple engine powered boat. But then, it is no match for speed boats. Most of them are built around a speed of between 70 – 120 mph.

Having gone through the page. You will know that the fastest shark in the ocean is the shortfin mako shark. At a recorded speed of 60mph. It was able to take home the title.

We also outlined certain salient features the shortfin mako shark possesses that made it stand out. They include a powerful keel, propelling tail, torpedo body shape, dermal denticles, and the ability for its internal temperature to be raised above that of the surroundings.

All these and more combine to give the shortfin mako a powerful edge over its contenders.