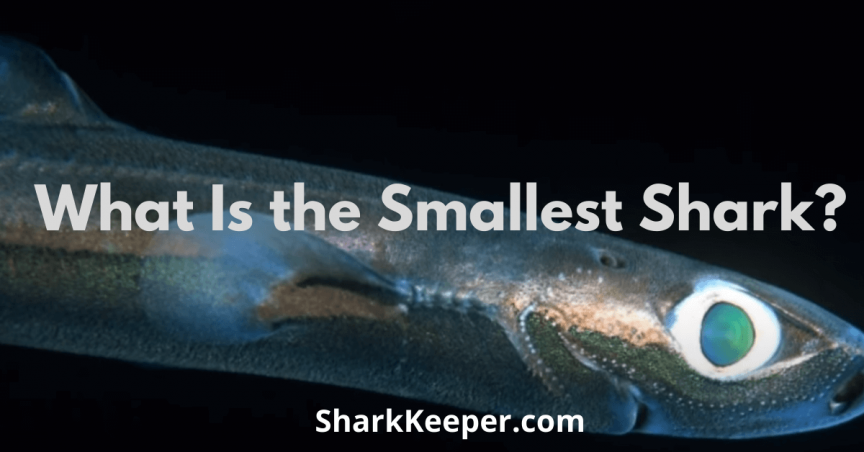 You hear sharks are big creatures, have you thought what about the smallest shark? No doubt, smaller things can skip our notice. But not when I bring well-sourced details about them to your notice. Discover all for yourself in few minutes read.

Do you think baby sharks are the smallest? If they are what then are their species? If we consider animals small. Then we ought to determine how small the species are at sexual maturity. That is only when we can assert that they are small. It is on this note that the dwarf lantern shark (Etmopterus perryi), takes home the title. It is the smallest species of the seven discovered lantern sharks, from the dogfish family.

Though, there are other contenders worth your notice. They include Spined Pygmy shark (squaliolus laticaudus) and Pygmy ribbontail catshark (Eridacnics radcliffei).

Now you have known the most widely accepted smallest shark species. You must understand that certain authors further debates about this title. This is because researchers have difficulty determining the maturity of these smallest species.

Let us find out why the dwarf lantern shark is still winning? Also, how small is the shark and what visual standard can you liken it to? This is for you to keep remembering it.

Why Is the Dwarf Lantern Shark Considered the Smallest Shark?

This is because its measurement is lesser than the rest of the contenders. For instance, the highest recorded length is 21 cm. While that of the spined pygmy shark the closest contender is 28 cm.

How Small Is the Smallest Shark?

It is that small that fishermen think it’s a waste of energy, setting out to catch it. Except it ends it their net when looking for a bigger catch. It can fit into an adult human hand. The normal length of the male is between 16 – 17.5cm. While the female can measure from 17- 20cm. The highest reported recorded length is 21cm (8.2 in). The weight is also around 0.5 ounces.

There is also the presence of photophores in its belly and fin. It helps them glow in their dark environment. The scales are also shaped like the letter “V”. The presence of 5 small gill slits shows it no less or more than any shark. And, the upper jaws can contain up to 22 rows of teeth. The lower jaw can house close to 32 teeth also in a row.

What Is the Smallest Shark Breed?

What Is the Smallest Fresh Water Shark?

Normally you know for long that sharks live in the ocean. You are probably wondering when they left the ocean for rivers and lakes. Let me highlight here that there are true shark species that inhabit freshwater areas. e. g the bull shark and Glyphis glyphis.

However, the smaller shark species in freshwater aren’t truly related to sharks. They are rather of the cyprinid and catfish family. They earned the name because they possess traits and appearance typical of sharks. These include aggression, forked tail, and dorsal fins.

However, the smallest of them is the Roseline shark or Denison barb shark. This colored beauty from India inhabit fast running rivers and streams. It’s length normally run from 9 – 11cm (3.5 – 4.3cm). There are reported cases of 15cm (5.9cm).

Also, note that freshwater sharks are largely in demand as home pets and aquarium collection. This is because they are adapted to normal water. And, of course, they are typical sizes you can handle in your home.

What Is the Smallest Shark You Can Buy?

Well, this depends on what you want to buy the shark for. If it is for your home aquarium. You will need to decide which tank you want to keep. Though freshwater pet sharks aren’t true sharks.

Roseline shark is among the smallest you can buy. Redtail shark is worthy of your consideration. They can grow up to a length of 6inches. There are others of similar length to the Redtail shark.

Also, if you want a real saltwater tank to keep true sharks. Then I suggest Epaulette shark will be ideal. They can grow up to a length of 42 inches (105 cm). However, you do need up to 200 (757 liters) gallons of water. This is to help sustain its water space needs at maximum length.

Do research about other needs of these sharks and their ability to co-exist peacefully with others. This is before buying them.

What Is the Smallest Great White Shark?

Meanwhile, there is another report about a baby great white shark caught in New Zealand. Apparently, the pup was washed ashore. It measured 1.05m and 7.8 kg as against 7.8 m and up to 2500kg of an average great white shark. These reports alone lend credence to the fact that younger ones are the smallest member of a species.

What Is the Smallest Hammerhead Shark?

Its head is shaped like a mallet and is widely distributed across tropical waters of Peru and Mexico.

What Is the Second Smallest Shark?

What Is the Smallest Most Dangerous Shark?

Let me highlight here, that most dangerous sharks exceed 5 feet in length. Recorded attacks on humans are from bigger species. They are able to pull off the attack because they are way bigger than humans.

However, humans are bigger than these smaller ones. Some can even fit into their palms. It is at this juncture, that smaller species will need to find animals they can maneuver to prey upon. There are scanty reports of smaller sharks attacking humans. Or, even the smallest of them.

Meanwhile, there are records of certain species of sharks that their pup can eat up their fellow pup. This is inside their mother’s womb. e.g. the Sand Tiger Shark. This cannibalism alone is something else, don’t you think?

What Is the Smallest Prehistoric Shark?

Prehistoric sharks existed millions of years ago before writing and documentation. The smallest shark known from the era is Falcatus falcatus. It was known to exist precisely during the carboniferous period of 325 million years ago. Its existence was known through fossil evidence. Their salient features include a protruding spine in males. And, bulging eyes in both males and females.

This evidence of a male and female. It gave an insight into the length which measures close to 25 – 30 cm. This makes it the smallest prehistoric shark identified. Understand that most prehistoric sharks have gone into extinction. So also, Falcatus falcatus.

We have come to the end of this page. And it aims to tackle most questions we may have concerning “smallest sharks”. I emphasize that the smallest shark is the dwarf lantern shark. The smallest prehistoric shark is Falcatus falcatus.

While Falcatus falcatus no longer exists with us. The dwarf lantern shark is still much around. And, further studies are still being conducted about its existence.