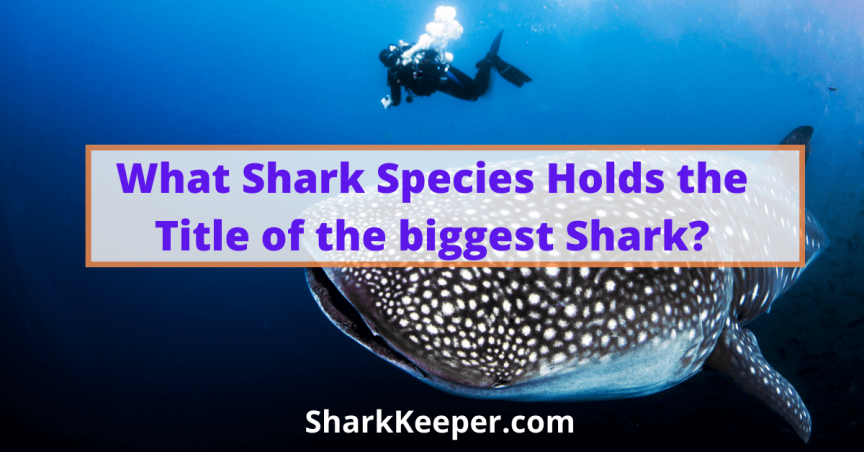 You are not alone if you wonder what the biggest shark looks like. We all love it when what we see is bigger. It is easily seen, talked about, remembered, and continually stir our fascination. Now, I have a write-up born of true research, to help feed your curiosity. Let me take you on that journey.

Still wondering what the biggest shark is? The biggest shark is any of the shark species that holds the title of the largest of all the species in the shark’s family. This title goes to the whale shark. The maximum range of length of the whale shark runs between 40 – 62 feet. And, it can weigh up to 60,000 pounds. This record-breaking measurement not only makes it the biggest of the sharks’ family. But, of every non-mammalian vertebrate.

Now, let us find out every answer to your questions.

The whale shark may appear as an airplane in shape. With a very long and broad oval body narrowing into a tail.

The back and sides are deep grays. However, the underbelly is white with a mottle of pale gray and white. This creates a pattern unique to each one of them.

It has two back fins. They lay on both sides as they tend towards the tail legion. Also, one fin near its chest area.

Moreover, the head is wide and flat. With small eyes at each corner. The mouth is wide across the head. And, can contain a row of 300 tiny teeth. The skin is hard and rough and can be near 15cm thick.

What Is the Biggest Shark Ever Recorded?

Do you still think it is the whale shark? Well, history says something different. The answer is Otodus megalodon (Bigtooth) or Megalodon.

Why was whale shark earlier accorded the title of the biggest Shark?

It is simply because O. megalodon have gone into extinction millions of years ago.

The only evidence researchers have to lend credence to its existence is fossil evidence of teeth and bones. As a result, one tooth discovered measures 7 inches which is about three times that of the great white shark tooth.

Through the teeth and bone measurement. Researchers roughly calculated Megalodon’s size to be three times that of the great white shark.

These estimated sizes include 18 meters (60 feet). And, 25m (80 feet) as recorded by Encyclopedia Britannica.

What Is the Biggest Shark Alive In 2020?

This title currently goes to Nukumi, a female great white shark caught on the coast of Nova Scotia Canada.

Her weight is about 3541 pounds with a length of up to 17 feet 2 inches. She clinched the title when she weighed more than all the 8 great white sharks sampled in this year’s water tour.

No doubt, there are other sharks bigger than her inside the waters. But nowadays researchers work more with accurate measurement they have at hand. Understand, that She is the biggest living shark on record measured this year.

What Is the Biggest Whale Shark?

There are several reports of very large whale sharks in history. However, a female whale shark sighted at the Arabian Sea in 2001, is with the most accurate measurement of all of them. The estimated total length of the shark is 18. 8m (62 feet).

Also note, whale sharks are difficult to measure on land and water. This is due to the manner the tail fits into the body.

The ones spotted were likened to objects of known weights. Other forms included knotted ropes. Hence, these approaches used in earlier times made the measurement not to be regarded as dependable.

However, there are other larger whale sharks on record worthy of your consideration. They include two female great white sharks of 20. 75m (68. 2ft) and 18m (59ft). The sighting occurred off the coast of Ratnagiri.

What Is the Biggest Predatory Shark?

The great white shark is the biggest predatory shark. Though they are the sixth biggest species of the shark’s family. The fact that they are the species with the most human bite record, they are topping this chart.

I understand you might wonder why it isn’t a whale shark considering its enormous size. Well, it’s simply because whale sharks and basking sharks the second-largest species feed on planktons.

They do not feed on flesh and are friendlier with humans and other animals.

Unlike great white shark that feeds on flesh. You might have read reports that bites on humans are curious bites. There are yet other, reports of finding human flesh inside great white’s stomach. But then, that is a discussion for another day.

What Is the Biggest Shark Recorded on Camera?

Maybe you have seen old photos of fishermen posing with their big catch. You want to know if they are the first on camera. However, Deep Blue a female great white shark is the largest shark on a camera.

Also, note that the camera here means filming the shark.

She was first spotted off the Mexican coast, near the island of Guadalupe in 2014. She measured 6. 1m (20 ft). And, featured in a documentary by Discovery Channel. Later on, she appeared again at the island of Oahu Hawaii, in 2019.

What Is the Biggest Shark Ever Spotted?

The whale shark is the largest of the shark species. There are incidents in history describing the sightings of very large members. Hence, a female whale shark of estimated length 18. 8m (62ft), is the answer.

She surfaced off the Arabian sea in 2001. And, holds the record of the most accurately measured specimen than the rest.

However, the problem with other specimens is that visual sightings aren’t very reliable in measurements. The reporter compares it with objects of known weights. Understand here, that this may not entirely represent what the reporter saw.

What Is the Biggest Shark Kept in Captivity?

The recorded biggest shark held captive, where two whale sharks in 2005. They stayed captive in the world’s largest aquarium in Atlanta Georgia.

The aquarium measured 500, 000 square feet, with more than 7 million gallons of water. Though people thought the shark can reach up to 50 feet. There is no recorded measurement of the shark. But then, there is no record to beat this one to date.

What Is the Biggest Shark Caught?

However, El monstrou shark caught in Cojimar Cuba. With a reported weight of 7, 000 pounds and 21 feet in length. And, the kangaroo Island great white shark. With a reported measurement of 6. 9m (23ft). They are worthy of your note. Though the measurements are still debated upon.

What Is the Biggest Tiger Shark?

Tiger Sharks is the fourth-largest shark species. They hold a record of the second most recorded bites on humans.

A large female of 18 feet long holds the record as the largest tiger shark. She bears the name kamakai. The common length of Tiger sharks ranges between 10 -13 ft.

There are reports of tiger sharks measuring 24 feet, but it is still debatable.

What Gender Records A Greater Measurement Than the Other?

The females are no doubt, always larger in size than the males. They are longer with wider girth; this is to carry their young ones.

The largest ever recorded whale shark, great white shark, and tiger shark, are all females.

For instance, a larger length of a tiger male shark is 13ft. While the female is up to 15 feet. The normal length of a male whale shark can range between (26 – 30ft). The female can reach up to (48ft).

The end goal of this page is to Clarify, most questions you have concerning the keyword ”biggest shark”.

It is important to highlight that the biggest shark species is the whale shark. The biggest most accurately measured whale shark is a female shark reported from the Arabian Sea in 2001.

The biggest ever recorded shark is the Megalodon.

Lastly, you will understand that there are many sides to this question. Each with an entirely different answer.