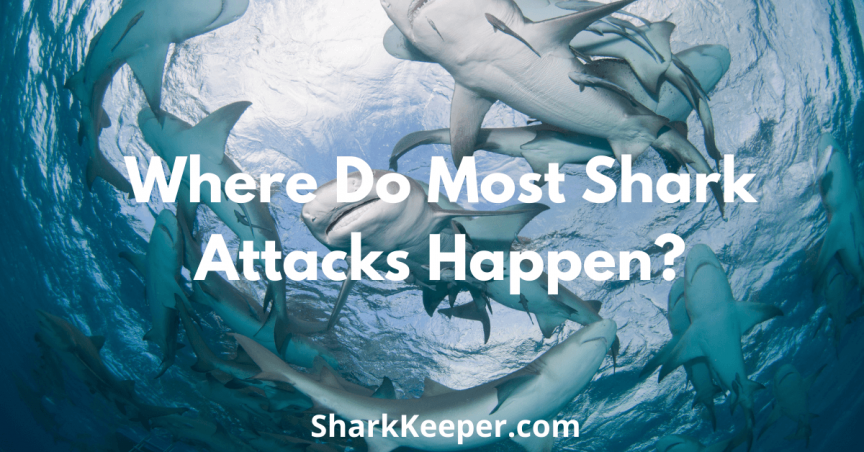 Sharks are dangerous and obviously one of the greatest sea predators. They attack humans occasionally following various reasons. And, with the reports of shark attacks on humans, you may wonder, “where do most shark attacks happen?”

There are several recorded shark attacks on humans in the United States and Australia. However, the United States has the record of most shark attacks on humans. And, the sharks that assault humans the most are: The great white shark (Carcharodon carcharias), The tiger shark (Galeocerdo cuvier), and bull shark (Carcharhinus leucas). There are other species that attack humans but sometimes their attacks are not violent and fatal.

Only about a dozen sharks in over 400 species of sharks are said to be involved in attacks on humans. Some shark attacks are unprovoked while many others are a result of human causes. For example, humans provoke sharks by stepping on them in the sea or shark fishing. Some of these provoked attacks may be unintentional.

Every year, about 80 unprovoked attacks reportedly occur worldwide. Despite how rare these shark attacks are, many people fear the fact that sharks still attack occasionally and no one knows when. Also, the popular horrific fiction movies like Jaws and Bait helps to strike the fear of sharks into people.

Which Country Has the Most Shark Attacks?

Other countries with records of shark attacks include Brazil, South Africa. Though the location with the most recorded attack is New Smyrna Beach, Florida. The use of technology and research teams facilitates these records in developed countries so these records are biased in regards to developing countries.

What is the Frequency of Shark Attacks?

There were about 79 unprovoked shark attacks in the year 2000. Although only 11 were fatal. From 2001 to 2010 the fatality average of shark attacks drastically reduced to 4.3 a year.

Regardless of these reports and records, the actual number of fatal attacks worldwide remains uncertain. In the majority of third world coastal nations, the method of reporting the shark attacks don’t exist. So, some of the fatal attacks and deaths are often unreported and unrecorded.

The type of shark attack is determined by considering the shark’s point of view. Attacks on humans considered to be a threat or a competitor to their food source categorizes as a provoked attack.

The most common criteria for determining if a shark attack was provoked is when it occurs human touches, hooks, nets, or anything that irritates the shark. Incidents that happened outside the aquarium is considered a provoked attack as it involves capturing the shark.

Sometimes people unintentionally provoke these sharks. Worst case scenario when a surfer accidentally hits a shark with a surf boat. Same thing as wearing a shiny swimming trunk or necklace and shiny jewelry inside the water. It attracts these sea predators. These sharks are curious animals so they want to find out what that attractive piece is.

This kind of attack is to be considered unprovoked when the shark initiates an attack. They occur in the water and without any human provocation. There are three subcategories of an unprovoked shark attack.

How Do Sharks Attack?

This method of attack usually happens in the surf zone or in murky water. It’s is mostly non-fatal, the shark bites and then leaves. Most victims don’t see the sharks. These hit and run attacks tend to happen mostly due to mistaken identity.

In this method of attack, the victim will not usually the shark and may sustain multiple deep bites. This sneak attack is an extraordinary rare kind, as the shark attack mostly for predatory cause, with the mindset to consume its victim.

Just like the name, the sharks bump the victims before biting. The great white is notorious for this kind of attack. Scientists consider it to be a test bite in an attempt to identify what the being is. This kind of attack is not believed to be a result of mistaken identity. This attack can be severe or fatal.

Sharks are apex predators and have little fear for any creature other than the orca whale. They become curious when they encounter anything unusual in their habitat. They lack the limbs such as hands or feet, so the only way to explore an object or an organism is to take a bite. Researchers consider these bites as test bites.

Some shark attacks can be a matter of territorial dispute or as a matter of dominance over other sharks. The primary idea in the aquatic wild is that big fish prey on the smaller ones.

Humans do not provide the necessary high-fat meat which sharks need to power up their energy for their large muscular bodies. In this sense, sharks don’t attack humans for feeding habits.

Moreover, sharks possess a sensory organ called the Ampullae of Lorenzini. The sensory organ can detect electricity generated muscle movement. The shark’s electric receptor can pick up a signal sent out by a wounded shark. For example, the shark might sustain injury by someone spearfishing. This can lead the shark attacking the person by mistake.

Normally a shark will make one swift and a quick attack and then allow its prey to die or weaken from the shock and wounds and blood loss, before returning to feed on it. This mode of attack helps the shark protect itself against injury from the wounded target or aggressive prey. During the time of the shark retreat, humans will have the opportunity to escape and survive.

Prevention of a Shark Attack

There are ways and methods the beach management adopt to protect humans from shark attack;

A shark barrier or a beach enclosure or a shark-proof enclosure is a protective barrier usually with seal to the surface. And, placing them around a beach separates people from sharks. When deployed the shark barrier provides more environmentally friendly and huge protection to avoid shark attacks.

Sharks is rampant in Australia and South Africa. In 1963 Sydney Beaches utilized these nets also.

Sharks net don’t offer full protection but the principle of fewer sharks, few attacks. The problem with the shark net is that it is a tool for bycatch. Some sharks die while in captivity, this means that it increases the mortality rate of sharks both threatened and endangered species.

This is another method of shark fishing. A drumline is an unmanned aquatic trap used to lure and capture large sharks with baited hooks. The idea is fewer sharks, less probability of shark attacks. It was first deployed to protect the marine environment from sharks in Queensland in 1962.

Other protection methods are the beach patrols and lifeguards and spotter aircraft to protect popular swimming beaches. Aerial patrol has limited effectiveness in reducing sharks attack.

Other methods include, shark tagging efforts associated with tracking and notification systems. The Capture and translocation of sharks to offshore waters, research into shark feeding and foraging behavior.

The sharks that attack humans are the Tiger, Great White, and Bull shark. Also, the Ocean Whitetip may have killed many castaways that aren’t accounted for. So basically, the statistics does not involve the underdeveloped countries that don’t have the necessary tools to keep records. You can say that the statistics has limits.