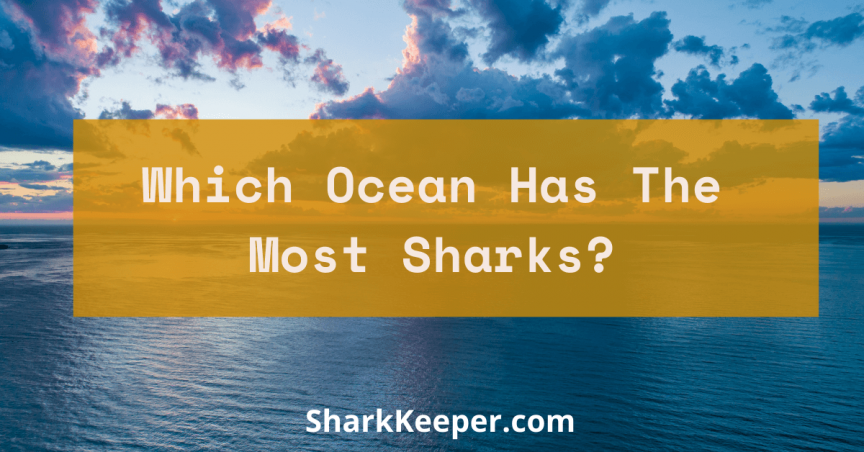 Tourists go all out to see the great blue sea. You may wonder if they ever stop to know how many sharks are underneath the sea. Or, of course, which ocean has the most sharks.

Sharks have lived for thousands of years, surviving the era dinosaurs could not survive. There are over three hundred species of sharks swimming underneath the ocean.

These creatures are vicious, skilled hunters, great swimmers, filter feeders, and fishes of prey with great senses that help them survive the ocean.

However, with the high number of species of sharks, they all do not have the same habitat. Some stay in shallow to deep-sea environments, coastal regions, while others live in deep waters.

Which Ocean Has The Most Great White Sharks?

Of the species of sharks, great white sharks are the ones known to not be in any aquarium because of the migratory traits, traveling vast distances.

This means you could see a great white shark in any of the ocean around these places. Great? I don’t think so, you wouldn’t want to come face to face with an animal with 300 triangular teeth arranged in rows.

Great white sharks hold the record for most shark attacks on humans. Their torpedo-shaped body is built for speed letting them outswim predators and easily catch prey.

Their sense of smell is top-notch, so is their curiosity making them sample bite anything they see and spit it out if it is not on their menu list like humans.

Which Ocean Has the Most Mako Shark?

The mako shark lives in warm waters, preferably, but they could also be seen in tropical or subtropical portions of the Atlantic, Pacific, and Indian oceans. They sometimes occur in colder bodies of water also.

These sharks are highly migratory in nature like their cousin, the great white shark; they swim long distances looking for a mate or moving from a food source to another.

Mako sharks are of two species – the shortfin mako and the longfin mako, their fins are their major difference. The shortfin mako shark is the fast shark swimming up to the speed of 45 miles per hour earning the title of the fastest shark – cheetahs of the ocean.

There is a massive decline in the number of mako sharks we have in the oceans in the world. This is as result of the overfishing of these creatures by man.

Which Ocean Has the Fewest Sharks?

A large number of shark species and the fact that these sharks live in oceans around the world makes it difficult to know which ocean has the fewer number of sharks.

There is really no even distribution to the number of sharks in the oceans but at least one shark species is present in every ocean.

Sharks do not like cold waters so much, preferring warm temperatures. This means that sharks are rare in the Dead Sea while the Arctic Ocean has few sharks too.

Asides, the cold temperature water, sharks are becoming fewer in oceans because of the overdue hunting by humans for their fins. The rise in demand for shark fin soup, their teeth used for jewelry, and for commercial fishing led to the unchecked killings.

Around the world, humans kill an estimated 100 million sharks every year as compared to the “few” shark attacks on humans. See source.

Which Ocean Houses the Oldest-Living Shark?

This shark species is so old that they are present even during the founding of the United States.

These creatures survive on fish mostly though they are not active hunters. They are difficult to study because they prefer the deepest parts of the ocean.

In Iceland, the flesh of the Greenland shark is a delicacy, that is toxic if it does not undergo the required treatment.

How does the oldest living shark compared with other old living creatures?

One would ask. Well, Aldabra giant tortoise is known to live for up to 255 years. The hydra is another ocean species that does not age, making it immortal See source.

Are There Any Ocean Without Sharks?

So, shouldn’t the question be what would happen if there are no sharks in the ocean?

Sharks are the apex predators of the ocean; sharks in the Lamnidae family are fishes of prey, eating smaller fishes, rays, seals, and other marine animals. This act helps regulate life in the ocean.

In all the negative views, we have had about sharks; well, we should also know that these creatures are the good boys of the sea just trying to regulate the ecosystem.

Sharks hunt preys that are sick, old, with injuries, and are slow which helps in preventing the spread of disease amongst other fishes, see for details. See source

Where Do Most Shark Attacks Happen?

Sharks are nice creatures too, I’m sure you would want a picture with one of them. However, you should not get too close. Funny, right? You wonder now, how you could take a picture with a shark without getting close.

Well, you could go cage diving. The most number of shark attacks on record took place in Florida at New Smyrna Beach occurring less than 100 feet from the shore.

Guess which shark holds the record for the highest number of attacks; you guessed right, the great white shark. The great white has a total number of 314 attacks; the striped tiger shark has 111, bull sharks with 100, and blacktip shark with 29 attacks. See source.

Which Ocean has the Most Dangerous Sharks?

Generally, sharks are not dangerous with over three hundred species of sharks in the oceans. However only about 12 species are potentially dangerous to humans.

The bull sharks happen to hold the title of the most dangerous followed by great white sharks. Bull sharks are aggressive species that mostly occur in areas with high populations. They also swim through brackish and freshwater alike.

The bull shark and the great white shark are not the only dangerous sharks swimming in the ocean. The tiger shark ranks amongst the top three most dangerous sharks (https://www.quora.com/Which-ocean-has-the-most-dangerous-sharks).

However, other sharks do not attack humans. Whale sharks, basking sharks do not appear dangerous to humans except in some instances when swimmers swim so close to them and accidentally swatted by their tails.

In the end, we get to know no ocean has the most sharks but then some oceans house some species of sharks, and the ocean with the highest record of unprovoked shark attacks.

Asides from that, we got to know which ocean has the greatest white sharks, which one has the fewer sharks, the most dangerous shark in the ocean. Amazing dive into the ocean to find out about the sharks of the ocean, right? I guessed so too.