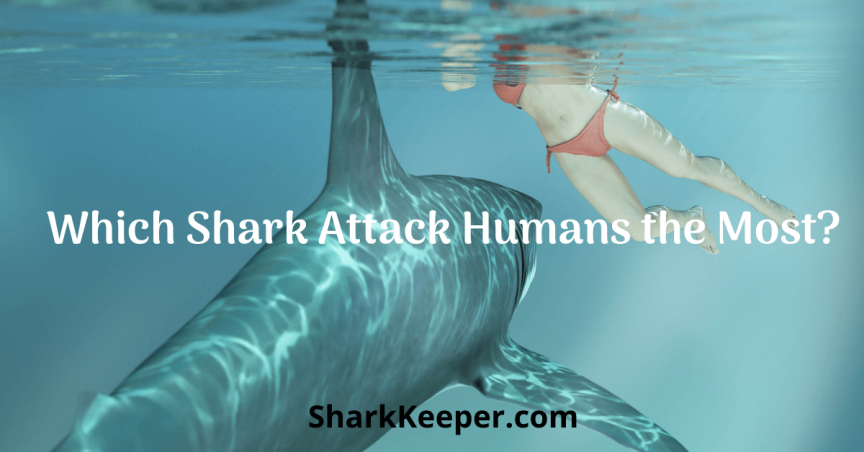 We are set to think that sharks are villains attacking humans without remorse. This is usually as a result of what we’ve read or seen in movies about sharks. And, knowing there are several shark species, we think, which sharks attack humans the most? Do all sharks attack humans? and why would a shark even attack humans at all?

Shark attacks on humans have declined over the years, and it is now rarer than ever. The international shark attack file recorded only about 60 sharks attack each year worldwide over the last decade.

On average, only about five people die per year due to shark attacks. This is evidence that most shark attacks are not fatal.

Now let’s talk about the species of sharks that attack humans the most, how they look, and why they do it.

Reports show that these sharks involve more inhuman attacks compared to any other shark. In fact, it has a record of 314 unprovoked attacks on humans.

Great white sharks are curious and intelligent creatures. Consequently, many researchers believe this could be why they attack humans in the first place.

However, there’s a theory stating that great white sharks attack humans because they can detect movement in the water quickly. At least, before humans can even spot them. thanks to their great sense of smell.

This, therefore, makes them go after humans mistaking divers for prey. Especially, when approaching from below the water.

Another theory suggests that they go after an unidentified prey. This is to test its potential as food because of their natural curiosity. Since sharks do not have arms or hands to feel, they rely on the investigatory bite to satisfy their curiosity.

Another reason why great white sharks would attack humans is that they are trying to protect their space. They communicate through their body by posturing and biting.

A diver who is not aware of a shark would accidentally invade the shark’s space, leading to an attack. If any of the theory is true, it would explain many of the hit and run attacks on humans by these sharks.

Tiger sharks are the no. 2 of most attacks on humans according to the international shark attack file. Due to tiger sharks’ large size and voraciousness, they are considered very dangerous to humans.

Tiger sharks tend to be more aggressive when they see humans. Unlike great white sharks, tiger sharks do not swim away after biting humans because of their undiscerning palate.

Why Are Tiger Sharks Dangerous to Humans?

Tiger sharks live very close to shore, which is where humans swim. They also often visit harbors, shallow reefs, and canals. This makes running into humans quite inevitable.

How Do Tiger Sharks Look?

Tiger sharks earned their name because of the vertical stripes on each side of their body that resemble a tiger. However, these stripes fade away as they mature, so it may not be as distinctive as you would imagine.

Tiger sharks have unique sharp dentition that can break substance as hard as a turtle shell. These sharks are garbage eater because they can eat just about anything, including human-made objects. They can grow up to about 3.25 to 4.25 m in length.

Shortfin Mako sharks is arguably the fastest shark on earth. They swim up to about 20 miles per hour. This shark species believed to also be extremely dangerous to humans.

There have been many reports of Shortfin Mako attacks on humans. But scientists also think most of the attacks are due to human errors. Of course, since most attacks occur when farmers try to drag these sharks into their boats.

Shortfin Mako sharks reduced greatly in population due to overfishing by humans.

Oceanic whitetip sharks are unpredictable opportunistic feeders. They have a bad reputation for being the first to arrive during wartime when ships were capsizing.

Especially, as men were waiting for rescue. According to witnesses, these sharks went on a feeding frenzy on humans during the time.

Since bull sharks can live in freshwater and seawater, they are considered the most dangerous to humans.

Bull sharks have 69 records of unprovoked attacks on humans. Though, scientists believe the numbers are more than that. But, because of their misidentification, some occurrences aren’t on the record.

There are different ways to determine whether a shark attack is provoked or not. Although from a shark’s point of view, likely all attacks are provoked.

Here are Ways to determine a provoked and an unprovoked attack:

Provoked attacks happen when humans touch a shark. This could happen when they try to capture it or hit it with a surfboard, whether accidentally or not.

Attacks that also occur outside the shark’s natural environment like inside aquariums or research holding pens are also considered provoked attacks since any of these things can aggravate a shark.

Under unprovoked attacks. There are three subcategories

Attacks like this are usually non-fatal because the shark typically bites the victim and then turn away.

In most of these incidents, the victims do not usually see the shark. Thus, making scientists believe this type of attack happens due to mistaken identity by the shark.

In this attack, the shark firstly rounds the victim and bump into it to weaken the victim before biting. This kind of attack is called a test bite.

It is typically common to great white sharks. They repeatedly bite the victim to identify what it is.

The event may become worse if the victim starts thrashing or panicking. Most times, the results of this attack are usually very fatal.

This kind of attack happens because the victim appeared as prey. It is rare, but in cases that it happened, the victims don’t actually see the shark. They would sneak up to the individual and just attack with a deep bite force.

The reason why shark attack humans is not usually to feed on them. Humans’ meat does not have enough high-fat sharks need.

They bite once out of curiosity or to test the potency of the victim for food. The reason why sharks bite once and leave the victim/prey to die is to avoid any injuries caused by an aggressive victim. Thus, conserving their energy.

Sharks also have sensory organs that detect even the water’s slightest movement. As a result, they can quickly detect anything unusual from miles away.

How to Prevent Shark Attacks

Shark barrier is a protective barrier put around the beach to restrict where it is safe for humans to swim.

These barriers usually come in handy in harbor beaches because they don’t function well on surf beaches.

This practice is most common in South Africa and Australia. Shark nets are installed on beaches to offer protection of humans from sharks.

This method does not entirely protect humans. But it means the lesser the no of sharks, the lower the chances of attacks.

This method’s disadvantage is they put the sharks at more risk than humans because this results in bycatch and may endanger the species.

A Drumline is an aquatic trap use to trap large sharks using baited hooks. The principal purpose of this method is to reduce the population of a shark in a particular vicinity.

Drum lines are just as effective as another method of protection. However, they seem to be more effective when targeting sharks’ most dangerous species.

This method is also effective in moving sharks from one location to another. The downside of this method is that it results in bycatch. Therefore, posing more threats to these sharks’ population.

The number of unprovoked attacks by sharks reduced drastically over the years. In 2019, only 64 confirmed attacks occurred worldwide.

Where Do the Deadliest Shark Attacks Occur?

The place where if not careful, you may likely suffer a shark attack is in western Australia.

Australia has the highest number of deadly shark attacks in the whole world. Hence, the total and deadly attacks in this location doubled in the last 40 years.

How these sharks look and why they attack humans have already been explained in detail in this article.