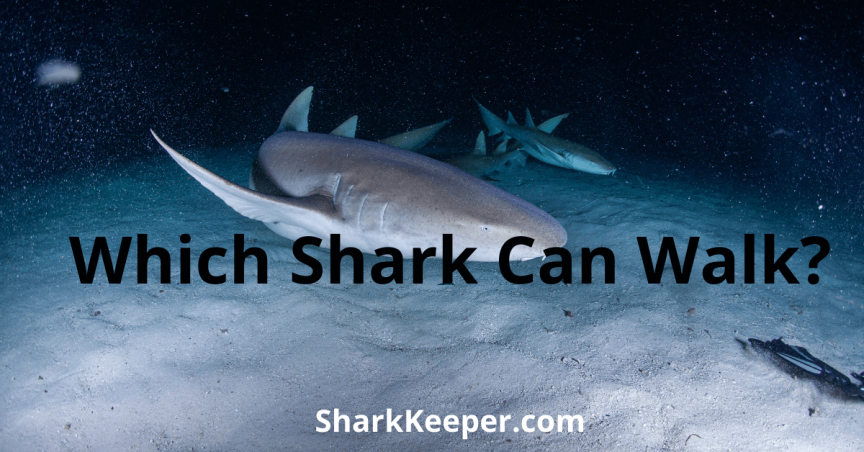 Would you believe that there’s a fish that can ‘walk’ or a wilder thought, a shark that can ‘walk’? Ever pondered if sharks could walk on land? Maybe you thought sharks grow legs at night to walk. Well, they do not.

Anyway, change is a constant thing and even sharks are not left out in the evolution process. Sharks remain excellent and fast swimmers but then, some of the species of sharks are evolving.

Answering the question, “which shark can walk?” Epaulette sharks have garnered the reputation of being able to ‘walk’ on land. These sharks ‘walk’ on land but that doesn’t mean they aren’t excellent swimmers. Nor, does it mean that they can now comfortably live on land.

This shark species can walk on land when needed. Asides from walking on land, they can also “walk” between coral heads at low tide, along the seafloor. ‘Walk’ here doesn’t mean they’ve grown feet, but they have learned the art of using their pectoral and pelvic fins as feet.

How Can Epaulette Sharks Walk?

Sharks are not animals with feet, so how do they get to ‘walk’ in water and on land. Remember, that sharks have the build for killing and survival. Yes, all they do is for survival.

Epaulette sharks are born survivors too, they can also survive with little or no oxygen. Amazing, right? I bet you wish you could do the same, if you don’t, some other fishes wish they can.

The reef system that these sharks stay in is so shallow and oxygen level could drop by 80% making it less inhabitable for predators and other prey. Epaulette sharks thrive in these areas.

They don’t grow legs too, not even at night. So, if you have that thought, you’re wrong. These creatures can walk with their fins though; their pectoral fins function as ‘feet’.

As earlier stated, where they inhabit are shallow, complex, and filled with reefs. For them to be able to move whilst they pursue their prey, they evolved the ability to walk along the seafloor by means of crawling with their pectoral fins.

Do Sharks Have Legs?

Since human inception, it has been a belief that whatever creature would ‘walk’ should have feet. These feet could be two for some creatures, four for some, and more for others.

Sadly, sharks do not have legs but the study shows that they are evolving to be able to ‘walk’ with their pectoral and pelvic fins. Some of these sharks can even walk on land for a bit.

Excellent swimmers and now ‘walkers’ – makes them top predators. These sharks are surely living the life many other creatures dream of living.

Are Epaulette Sharks the Only ‘Walking Sharks’?

Sharks have been for hundreds of years, even surviving what dinosaurs could not survive. Sharks species are over three hundred and more are being discovered yearly. Researchers are always having field days in their search for new species of sharks. Thus, research is still ongoing to find other species of sharks that ‘walk’.

Until 2008, researchers believed there were only five species of walking sharks. All of which were still epaulette sharks just that they had different patterns and coloration.

With more researches being carried out, they’ve found out that these ‘walking’ sharks are up to nine species.

The Longtail carpet sharks otherwise known as Bamboo sharks are the species of sharks that have learned how to ‘walk’ underwater as a means of surviving in the reef; also, they could walk a bit on land.

Hemiscylliidae is a family of sharks in the order Orectolobiformes; they’re the commonl Longtail carpet sharks.

Sharks are deadly creatures, combining speed, strength, and plenteous of teeth in a wide mouth. To add a few details, sharks’ teeth fall off just for new ones to replace them. The teeth of the epaulette shark are similar in each jaw; they are small, broad-based with a small cusp, directed posteriorly.

Sharks are dangerous. The epaulette sharks are however not dangerous to humans but when captured, they could squirm or probably nip their captors; just so they could get free.

If not captured, these creatures could just walk on land whilst observed by beachgoers as they move slowly out of the water and without fear of humans. They’re docile.

How Big Is A Walking Shark?

Sharks are known to be big creatures, even the young of a shark is usually big. At birth, the pup of a great white shark is already about 5 feet (1.5 meters) long. As it grows, it may reach a length up to four times that. Check National Geographic for more details.

These sharks are however small, slender, and almost eel-like. The tooth rows in the upper jaw are up to 26 or 35 while in the lower jaw there are up to 21 to 32 rows; small sets of teeth.

How Does an Epaulette Shark Reproduce?

Epaulette sharks are Oviparous which means that they lay eggs. The females can have up to 20 young a year after releasing paired ellipsoid egg cases under coral heads.

When mating, the male epaulette shark holds on to one of the female’s pectoral fin with the gill area in his mouth to help stabilize both of them.
After the eggs are released in water, a fibrous material on one side of the egg gets entangled with the coral to help maintain its location.

The egg cases they release into water measure approximately 9 by 3.5cm and hatches after about 120 days; it may vary depending on water temperature. The young pup measures about 14 – 16 cm long (5.5 – 6.3 in).
Research shows that they can live for up to 20 to 25 years.

How Long Can Epaulette Sharks Stay on Land?

A walking shark can stay out of water for about three hours. Yeah, you read that right – three long hours.

The epaulette shark’s ability to survive with little or no oxygen helps it in achieving this feat. Alongside, the sharks’ place of habitation – shallow areas of water that could see oxygen drop as low as by 80%, the shark could walk on land, surviving for three hours.

These sharks are the youngest group of sharks in the shark dynasty, evolutionarily. And they are less adventurous; most of them spend their lives in severely restricted ranges, rarely venturing more than a mile from the reefs where they are hatched.

The walking shark can slow its heartbeat and power down its brain for more than an hour while it is out of water; that’s how they survive on land, wriggling and pushing their way across dry land just as they do in reefs.

What does the Epaulette shark eat?

The fact that the epaulette shark inhabits the bottom of the ocean, covered with reefs; they are primarily bottom feeders that would prefer substrates of sand and coral reef growth as their source areas for food.

They feed on mostly invertebrates, crustaceans, small fishes, and polychaete worms. Adults feed more on crabs and shrimp while juveniles feed more on worms and fish. Both adults and juveniles utilize suction feeding.

These species of sharks are opportunistic feeders; they are ready to eat any variety of food so long as it is available. Their keen eyesight, sensitive nasal barbells, and the ability to sense tiny electrical currents from other animals make them very efficient in finding food.

Epaulette sharks are although said to be nocturnal meaning they operate only at night; they can still be seen searching for food at any part of the day. Dusk and dawn, however, remains their favorite times for feeding.

In the end, we found answers to all the questions. Specifically, we found out that there is a shark that walks not just in water but on land too.
This species of sharks do not necessarily have feet but they have evolved to be able to use their pectoral and pelvic fins as “feet”.

Not mincing words, ‘intriguing’, ‘amazing’ are the best words to use in qualifying these creatures. Feel free to add some too.