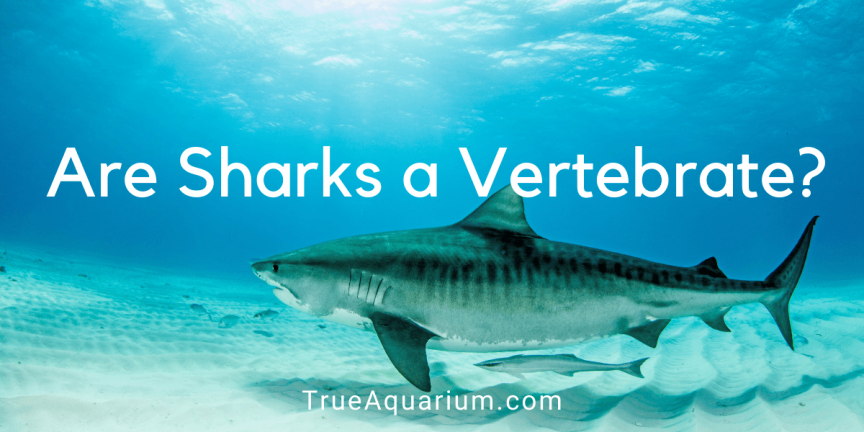 You may have heard or read that sharks do not have bones, and you wonder “Are Sharks Vertebrates?” Well, let us consider the simple definition of vertebrates. Where a vertebrate qualifies any animal with a spinal column. Merriam-Webster gives a more elaborate definition.

So, are sharks a vertebrate? The answer is Yes! Sharks are vertebrates. Despite the fact that these creatures do not have bones, they do have a skeleton. Their skeletal system is made up of cartilages and not bones. According to the definition above, sharks have a spinal column, hence, qualifying them as vertebrates.

Sharks are under the class of fish called cartilaginous fish. This group includes other aquatic creatures such as skates and rays.

Let us see the characteristics of sharks as vertebrates and why you should consider them as one.

Why are Sharks Considered Vertebrates, If They Have No Bones?

Considering the scientific classification of sharks, they are Chondrichthyes (Cartilaginous fish) belonging to the Sub-Phylum Vertebrata and Phylum Chordata.

Wouldn’t this be the question, why are they classified as such?

Let’s break it down.

To better understand this question, you need to understand what “being a vertebrate” interprets. Simply, the underlying feature of vertebrates is the Vertebral Column. This has other common names as the spinal column, spine, or backbone.

Given the definition of the vertebral column, the vertebrae do not necessarily have to comprise of bones.

And, for the fact that sharks have a vertebral column (Although, not made of bones), they are vertebrates!

Cartilaginous fish (including sharks, skates, and rays), mammals, and humans are all vertebrates since they possess the vertebral column.

A shark typically has a spinal column consisting of two tubes of cartilages. One of these tubes covers the spinal cord in a continuous clad. This is mainly why sharks are considered vertebrates.

Yes! The hammerhead shark, great white shark, and whale shark are vertebrates. Though these are different shark species, however, they are not more or less “sharks”.

Just like any other shark, these sharks have the spinal column made up of cartilages. In fact, their entire skeletal system comprises of cartilages. They do not have bones as is general for sharks.

So, when we say sharks are vertebrates, we mean all sharks.

What Class of Vertebrates Do Sharks Belong?

Generally, sharks belong to the class of vertebrates “Cartilaginous Fish”. One may simply classify sharks simply as fish. Certainly, but what type?

There are nine different classes of vertebrates. Out of these nine classes, five of them are fish. Each of the five classes has distinctive traits by which the appropriate grouping of members is possible.

Of the about 50,000 species of vertebrates, there are only nine classes which include Hagfish, Lampreys, Cartilaginous Fish, Ray-Finned Fish, Lobe-Finned Fish, Amphibians, Reptiles, Birds, and Mammals. (The first five are all fish).

What are the Functions of a Shark’s Vertebrae?

The shark’s vertebrae just like in other vertebrates, primarily functions to protect the spinal cord.

The neural arches form the upper cartilaginous tube. And, between the vertebrae are extra layers of cartilaginous structure which covers the gaps, enabling it to envelop the spinal cord in a continuous sheath.

The lower cartilaginous tube forms an enclosure for the notochord. It has multiple layers of calcification and is made of an intricate structure.

What Makes Up the Skeletal System of Sharks?

The entire skeletal system of sharks comprises of cartilage and connective tissue. Unlike bone, cartilage is a flexible tissue that grows with the shark. This tissue is light in weight, about 50% the density of bone.

Sharks have no bone. This is unlike Humans and other terrestrial animals that may have a combination of bones and cartilages.

The composition of cartilage includes specialized cells known as chondrocytes. These cells generate an extracellular array of collagen fibers, elastin fibers, and proteoglycan.

Essentially, the bone is cartilage that gained extra hardness through mineral calcification. During this process, calcium crystals provide additional toughness.

For example, the spine and jaws are made of calcified cartilage. This is because these areas naturally endure heavy wear and tear. The special cartilage has a coating of calcium salts which makes it extra rigid and firm. Certainly, this quality doesn’t come without a cost, thus, some flexibility is sacrificed for the extra strength. However, they still keep the lightweight.

Other parts of the shark made of specialized cartilage include the skull and the snout. That’s right, the skull composes of denser cartilage than other parts. As a result, it confers extra protection to the brain while not losing its flexibility.

For the sharks’ snout area, there is soft, spongy cartilage. Think of this cartilage like an airbag, it helps in absorbing impact and deflecting damages.

How Does the Cartilaginous “Skeletal System” Benefit the Shark?

The cartilage is a lightweight flexible structure. Much lighter than bone, the shark’s cartilaginous skeleton only contributes 8 percent of the total body weight of the shark.

This is useful to the shark since the lightweight skeletal system keeps the energy required by sharks to keep swimming to the minimum.

Of course, these sharks lack swim bladders, hence, they aren’t buoyant naturally in the water.

Take it from me, a shark that has higher energy efficiency has higher survivability.

The lightness of a shark’s cartilage may serve as the main benefit; however, it is not the only usefulness. It is also surprisingly flexible not minding the toughness.

This feature confers the shark a degree of control over its surrounding. Some shark species are remarkably flexible that they can turn around and bite something getting hold of their tail.

Another benefit of the shark’s cartilaginous skeleton is the reduction in wear and tear of the joint. Bones meeting at a joint would normally rub against each other leading to wear due to friction.

Cartilage is less likely to wear from rubbing against each other. Moreover, in sharks, there are bags of fluids which absorb shocks between the joints of their cartilages. These bags of fluids are the synovial capsule containing the synovial fluid. It reduces friction, further preventing wear.

In addition to the flexible nature of the shark’s skeleton, there also exist tough, elastic bands of tissue holding the joints in place.

These elastic tissues also allow the shark to overstretch its joint without causing damage. More so, they are behind the shark’s ability to open its mouth so wide, especially to catch prey.

Why are Sharks Classified as Cartilaginous Fish Vertebrates and Not Mammals?

Sharks are vertebrates just like mammals. But sharks belong to a class of vertebrate which is the Cartilaginous Fish.

It is important to understand that being just a vertebrate does not qualify an animal as a mammal.

Other characteristics of mammals include having some sort of hair on their body for temperature regulation. Of course, you know sharks do not have hairs on their body, instead, they have scales that aid their swimming.

It may interest you to know that a few species of mammals such as platypus are egg-laying. Hence, this is not a strict characteristic of mammals.

So, if you ask again, are sharks mammals? The answer remains NO! sharks are not mammals. Instead, they are in the group of Cartilaginous Fish.

This page clears the air for those asking the questions such as “are sharks a vertebrate or invertebrate?”, “Why are sharks considered vertebrates?”, “What class of vertebrates are sharks?”, and other related questions.

In the end, we found out that sharks are vertebrates under the class of fish known as cartilaginous fish.

And, for emphasis, sharks are Not invertebrates! They do not have bones, Yes, but their cartilage forms a vertebral column which qualifies sharks as vertebrates!