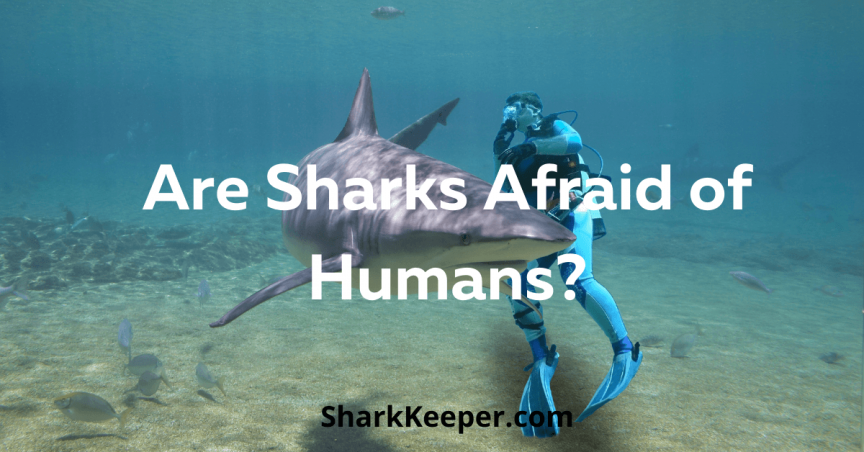 We know many of us are afraid of sharks. Therefore, we try to stay away from them even if it means not going to the ocean. But, would these sea creatures stay away from humans? Are sharks afraid of humans?

When divers enter the water most shark species would remain indifferent about their presence. Some may even approach out of curiosity. However, as long as the diver keeps cool, these sharks wouldn’t bother him.

Now, you may ask, if sharks can win a shark-human attack, why then should they be afraid of humans?

Why Are Sharks Afraid of Humans?

The main reason sharks are afraid of or, should be afraid of humans is that humans pose a great deal of threat to them.

Let’s say for some reason such as witnessing a shark attack on humans. Or, maybe reading about how dangerous sharks are, we believe that sharks pose more threat to humans.

However, statistically, humans pose more threats to sharks than the other way round. Humans target sharks for so many reasons which include their meat, skin, oil, fins, and so on. But sharks have no reason to target humans.

In fact, if not for curiosity or trying to protect themselves, shark attacks on humans wouldn’t be a thing. Of course, humans are not on the food menu of sharks.

Take a look at this comparison.

A study in 2013 by the journal Marine Policy, revealed that humans kill an average of 100 million sharks yearly. These include bycatch and target killings of various shark species.

Compare this with to record of shark attacks on humans.

Throughout the history of shark attacks on humans up to 2014, there are only 2,777 attacks recorded as unprovoked. Among these, only 497 were fatal.

There may be an increase in recent attacks. However, you cannot compare it to the damages that humans do to the sharks’ population.

This is a threat enough for sharks to be afraid of humans. Come to think of it, what if sharks decide to attack humans with the same energy? Just maybe we wouldn’t be visiting the ocean.

In What Ways Do Humans Pose Threats to Sharks?

The massive decline in the population of sharks is a result of human activities. Humans pose a great threat to sharks in various ways which include:

Fisheries go out in search of sharks, hunting them down for various purposes. They make use of longlines, trawls, and gill nets to capture these sea creatures.

Sometimes they use chemicals to poison sharks. However, this method of fishing is now prohibited in most places due to its dangers.

Humans target these sharks for various economic purposes. The use their flesh for food, skin for making leather, their liver for oils, and their fins for shark fin soup.

When humans target sharks, they prepare for them and kill them for whatever reason they need sharks. This leads to a reduction in the population of many shark species.

There is a form of a targeted attack on sharks referred to as “Shark Culling” or “Shark Control”. This involves the deliberate killing of sharks. Government authorities usually introduce this as a way to respond to shark attacks.

They refer to public safety as the reason for shark culling. That is to say, the activity is to reduce the risk of shark attacks on the general public.

A lot of criticisms from conservationists, environmentalists, and welfare advocates came for shark culling. They pointed out the harm of this activity to the marine ecosystem, moreover, it is not ethical.

Many countries where sharks exist, now make laws to protect sharks. This includes the prohibition of commercial fishing of sharks. Or, at least reducing the number of sharks captured to a certain percentage.

Several shark species are currently Endangered, while some are already Critically Endangered.

Targeted capturing of sharks contributes greatly to the decline in the population of many shark species. Hence, more efforts should be put in place to control it.

Bycatch involves capturing sharks in fishing nets by commercial fisheries usually unintentional. This simply implies that these fisheries set their longlines, deep-sea trawlers, or gill nets for other fish. However, they end up capturing sharks.

Bycatch is likely the largest threat that humans pose to sharks. Each year, an estimated 50 million sharks are caught through bycatch.

While many laws admonish the release of sharks captured through bycatch, most of these sharks die.

Well, you can contend whether bycatch is a mistake or not. Of course, there are methods of fishing that fisheries can exploit to reduce the risk of bycatch.

Some of these methods may include changing from steel to nylon leaders or making use of different hooks in long lines.

However, they mostly do not pay them any attention.

They usually convert sharks captured through bycatch to various uses. One of the most common use is shark fin soup. As a result, they sometimes cut the fins of these sharks and then throw them back into the ocean.

The commercial benefits that fisheries get from the bycatch of sharks are increasing in value. This is probably the reason why they don’t consider other fishing methods.

Shark finning is the cutting of shark fins to use for shark fin soup. This dish is very popular in Asia and gaining popularity in other locations.

The shark fin gives texture to the soup and not even the tasty element. Thus, you may wonder why the hype in the shark fin soup?

In Asia, the shark fin soup still has high value and still leading to the indiscriminate finning of sharks.

There is a need to educate the people on the impact of shark finning. And, that the shark fin soup may not really be what we take it to be.

Hopefully, this will lead to the reduction of the number of sharks captured each year for the very purpose.

Note: Humans pose a great deal of threat to the population of sharks. And, we need to understand that some of the shark species are already facing extinction which can mean harm to the marine ecosystem.

What is the Impact of Shark Finning?

Sharks thrown back into the water after finning obviously do not survive without their fins. This leads to a heavy loss in the population of sharks.

Sharks also have a slow reproduction rate; hence, it takes them time to recover from population loss.

In fact, depending on the shark species, it can take anywhere between 1 year and 3 years for them to reproduce.

Reduction in the population of sharks causes harm to the marine ecosystem. Of course, sharks are apex predators, as such, they play huge roles in the ecosystem of the ocean.

At least, sharks help to keep the population of prey healthy. This in turn maintains grass beds which could suffer destruction as a result of overfeeding from these smaller sea animals.

We do not want this to happen, that’s why we need to protect these sea creatures. At least, we can start by stopping shark finning and reducing bycatch.

Yes! Humans can help sharks in many ways to maintain their population. Instead of hurting sharks through finning and bycatch, we can adopt other fishing methods to reduce risk.

Another way is making laws against illegal fishing of sharks. And, then abiding by these laws.

Most important is educating the public on the importance of sharks in the marine ecosystem. When more people are aware, we can achieve better results.

Conclusion on “Are Sharks Afraid of Humans?”

Humans beings pose a great threat to sharks than they do to humans. Therefore, sharks have more reasons to be afraid of humans.

This page covers the threats humans pose to the shark population. Also, the impending problem we could face from the loss of sharks.

Therefore, there is a need to try to protect these sharks to avoid further decline in their population. If we save sharks, we could be saving the entire ecosystem of the ocean from collapse.