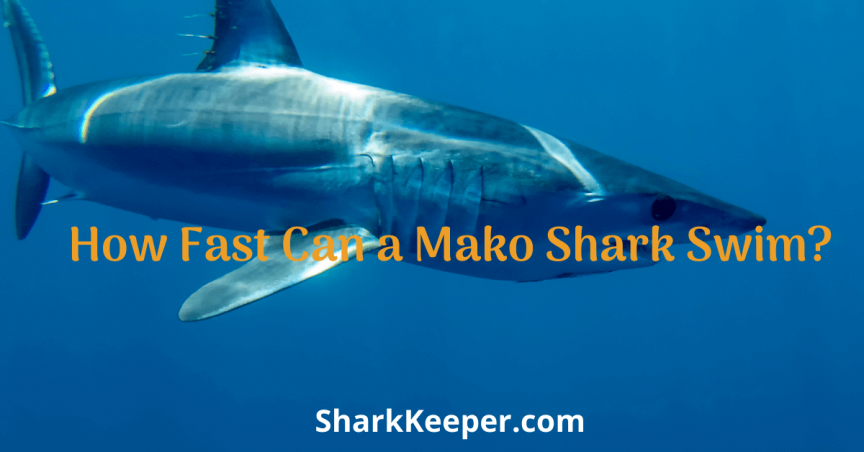 When you learn that Mako sharks are the fastest in the ocean, it’s normal to just imagine how fast they can swim. Are they faster than the fastest land animal? Can they beat an average human in speed?

Let us go further to see other characteristics of the mako shark – the cheetahs of the ocean.

How Can Mako Sharks Swim So Fast?

Sharks are oceans apex predators for reasons, their speed inclusive; their ability to swim so fast whilst they hunt or try to escape danger earned them the name ‘oceans top predators’.

One thing that helps sharks be able to swim so fast is the absence of a single bone in them and cartilages in place of bones. They are not as dense as bones but they still hold muscle and skin in place.

Ultimately, the mako shark’s skin structure is in a way that when you touch from head to tail, it is smooth but when you go reverse, it isn’t smooth.

Mako sharks have tiny flexible scales that cover their body; allowing them to control water flow over their skin and minimize drag. They are not just fast but they can change direction in a split second. Their top speed and ability to maneuver in a short time make them lethal and top predators.

What Are the Species of Mako Sharks?

Their favorite habitats are warm waters. But, they also occur in tropical or subtropical portions of the Atlantic, Pacific, and Indian oceans.

What Class of Fish Does Mako Shark Belong To?

The mako shark is in the cartilaginous class of fish like every other shark. They belong to the Lamnidae family that includes the salmon shark, the porbeagle, and the great white shark.

The longfin mako shark is the second biggest shark in the family growing up to 14 feet in length following closely the great white shark at 19.6 feet long.

This family consists of fast swimmers and deadly predators. The name of the family came from the Greek word Lamna which means fish of prey and derived from the Greek legendary creature, the Lamia. See

Humans are not on the menu of sharks but it is otherwise for them. Humans hunt fishes for their flesh, oil; they hunt sharks too and the mako sharks are no exception.

Although mako sharks do not eat humans they have been recorded eight attacks on humans and none was fatal. They are like every other shark tough to deal with.

These sharks appear to be the best of all sharks to eat due to their meaty and dense flesh; also, it is low in fat. Often times mislabeled as swordfish.

Mostly captured by fishermen alongside a school of tuna or swordfish, they are valuable to fishermen who take them for the liver, oil, jaws, skin, and teeth that are often times used as trophies and decorative objects.

Their decrease in population has also earned them the government’s protection. They are considered ‘Endangered’ in the Red List of the International Union for the Conservation of Nature.

Where Do Mako Sharks Live?

Mako sharks are travelers; they swim long distances looking for a mate or moving from a food source to another. They mostly just swim in search of potential prey and a mate. Adventurous, you could say.

The mako shark lives in warm waters, preferably, but they could also be seen in tropical or subtropical portions of the Atlantic, Pacific, and Indian oceans. They are sometimes found in colder water bodies too.

As there is a division in the length of the species of mako sharks, so is there in their place of habitat. The shortfin mako sharks are considered pelagic fish which means their habitat is the water column. They as much as possible avoid the ocean bottom and coastal waters.

While the longfin mako sharks are epipelagic, opposite of the pelagic, they inhabit the upper portion of the water column where light can penetrate.

What Do Mako Sharks Eat?

You would not find humans on their menu list but that does not mean they are harmless to humans. Their sharp teeth and speed is a thing of fright; their speed helps them catch up with prey and outswim predators.

The primary prey on the menu list of this species of shark is fish and squids, not limited to those though; they can also eat tuna, mackerel, octopuses, and other species of bony fishes. Rarely, they eat sear birds, other sharks, sea turtles too.

They represent the idea of sharks being lethal, sadistic hunters; they do not just go for the easy meals as they hunt swordfishes and bluefishes too.

Not much is known about the diet habit of the longfin mako shark, it is however likely to be the same as that of the shortfin mako.

How Do Mako Sharks Reproduce?

Sharks mating are usually bloody as a result of the male shark holding down the female, this act leaves them with scars on their bellies, flanks, and pectoral fins.

Female shortfin mako sharks are ovoviviparous, carrying eggs till they are fertilized and fertilized ones eat the unfertilized for nutrients. They have a thing with shark cannibalism.

The gestation period usually lasts for 15-18 months before they give birth to a litter of 4 to 25 live offspring. Then she waits another 18 months to get pregnant again.

Pups after birth are 25 – 28 inches long; males become adults between the age of 7 and 9 while the female is between 18 and 21. Generally, the species of mako sharks have an estimated lifespan of 29 to 32 years. Check source.

What’s the Feud between Male and Female Makos?

There seems to be a feud between the male and female mako sharks. Both sexes do not come together till it is time to mate.

Mako sharks are polygamous and polyandrous species that form groups differentiated by sex, making males and females not get along unless there is the objective of mating. Mating happens typically between late summer and early fall.

Scientists claimed that the adult male shortfin makos stay away from female adults so that females who aren’t ready to reproduce can avoid harassment from males.

Data gathered in the southeastern pacific shows that the shortfin mako practiced sexual segregation, finding the males on one side and females on another side. Another study in the north pacific got the same results. Check source.

This page clears the air for those asking “how fast can a mako shark swim?”, “how can mako sharks swim so fast?”, “Do humans eat mako sharks?”, “how do mako sharks reproduce?” and other related questions.

In the end, we found out how fast a mako shark can swim.

Additionally, we got to know that male and female mako sharks do not stay in the same habitat unless there is the objective of mating.