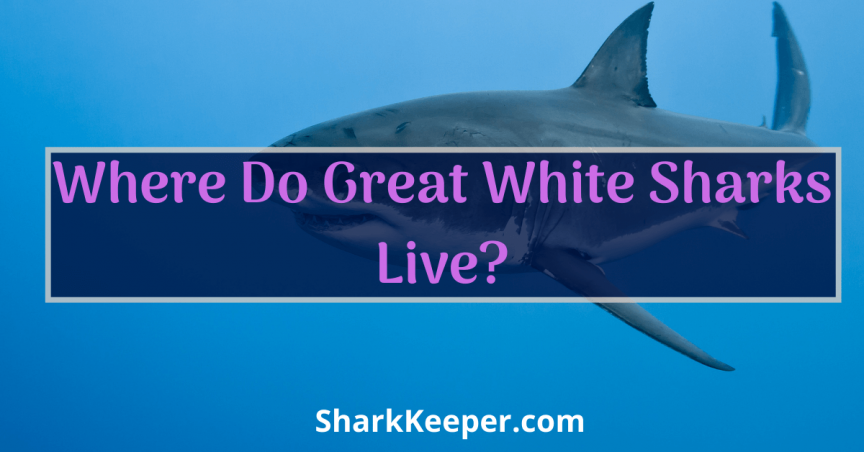 Great White sharks live in the ocean obviously. However, do these creatures inhabit all parts of the ocean? Or, do they live in particular regions? Would you see a great white shark whenever you visit the ocean?

So, where do great white sharks live?’ The answer is they live in almost all coastal and offshore waters that have water temperature between 12 and 24 deg Celsius (54 and 75 deg Fahrenheit). These waters are majorly characterized by plenty of fish and marine mammals.

It is pertinent to know where the great white shark lives to avoid stumbling on one when you go diving.

Where Should You Go If You Want to See A Great White Shark?

To see the great white shark, you would have to visit the oceans in the world from time to time. Incredibly, great white sharks do not have problems migrating long distances, therefore they live in many parts of the world.

Great white sharks are curious sharks and opportunistic hunters, makes them attack humans on water surfaces thinking they are seals. So, if you would want to see the great white shark, you should go on a cage dive or watch them from a boat.

Here are some of the places you could see a great white shark: The Farallon Islands, Dyer Island, or Cape Cod. See more

Where Do Great White Sharks Reproduce?

Up to date, plenty is still unknown about the mating process of the great white shark. But then, researches show a vital few.

It is not clear where the great white sharks mate. However, assumption has it that they mate in shallow waters away from feeding areas. Scars visible on female sharks are a result of violent mating.

The female great white shark is ovoviviparous and births live young and allow them to swim to fend for themselves.

Sometimes, great white shark pups appear in the North Atlantic Ocean with their umbilical scars not yet healed. Researchers also claim pregnant great whites swim to the area when it is the birthing season. Earth Touch gives more details.

How Do Great White Sharks Reproduce?

Sharks mate when they want to reproduce. A female great white shark is larger than the male in size and reaches reproductive age at 17 years. Their mating is like every other typical shark’ mating; violent.

Female sharks are always seen with scars that come as a result of mating, the male tries to hold it down by biting.

Great white sharks are ovoviviparous in nature. They grow in eggs which then hatch inside the mother. When it hatches, it feeds off nutrients from other unfertilized eggs and could swallow its own teeth for calcium.

It is estimated that the gestation period for great white sharks is about twelve months with a litter of about two to ten pups. Pups at the time of birth measures around 1.5 meters.

Unfortunately, there is no mother and child time for great white sharks and their pups as some even see their pup as prey (https://kids.nationalgeographic.com/animals/fish/great-white-shark/).

What Location Has the Highest Number of Great White Sharks Attack on Humans?

Whilst planning to travel to surf the ocean and/or go diving, do you ever stop to think about the country with the highest number of shark attacks on humans?

Humans are not on the menu list of sharks. However, that does not change the fact that sharks attack humans. So, you would not want to go surfing and/or go diving and come back with injuries from shark attacks.

Sharks live in all oceans in the world. However, there have been more recorded cases of a shark attack on humans in New Smyrna Beach also known as the shark attack capital of the world.

With a record of a total of one-third of all shark attacks on humans and half of the 41 unprovoked attacks in the United States.

Where Do Great White Sharks Hunt for Prey?

The insatiable great white shark eats three to four times than previously thought. They hunt for prey in the ocean where they live. The ocean is full of their favorite meal – fish, seals, sea lions, rays as well as other sharks. They do not have to leave the ocean to hunt for prey.

Great white sharks depend hugely on their senses when they hunt prey. The most important of their senses being their sense of smell that allows them to detect a drop of blood in an Olympic size swimming pool.

However, they also depend on their other senses when they hunt prey. These senses include sight, hearing, and taste and two extras aided by special receptors. These are electroreceptors and lateral lines.

Where Do Great White Sharks Sleep?

With the numerous shark movies you have seen, you would think sharks are always on the move and do not sleep. This is not entirely true.

Some sharks do not fall asleep in the traditional sense but they have periods of rest. In these periods of rest, their eyes remain open and their pupil can still monitor the swimming of creatures around them. An amazing way to keep surviving, right?

Some species of sharks do have to stop swimming when they need to rest. Meanwhile, some go to the ocean floor with strong currents that allow water to easily flow over their gills. See video

Where Do Great White Sharks Migrate?

However, research suggests it could be for feeding or for mating reasons; females as well could travel long distances just to give birth.

Great white sharks are found in oceans around the world. In the eastern Pacific Ocean, they regularly migrate between Mexico and Hawaii while in other ocean basins, they could migrate long distances. Check

In all this, the female great white shark is said to be the most migratory in nature because they could go to mate and give birth in a nursery. Shark pups are left to fend for themselves after birth, when they get larger; they swim back into the ocean to get bigger prey.

Where Do Whale Sharks Live?

Now that we know where the great white shark lives, some would want to know where whale sharks also live.

Although, some whale sharks also, have been spotted in cooler waters such as those of the coast of New York. See source

Whale sharks prefer warm waters so they are mostly seen in tropical seas. Migrating every spring to the continental shelf of the central west coast of Australia where they can get enough plankton for feeding.

Whale sharks are however the largest fish in the world, measuring the size of a school bus with unique patterns on their back like human fingerprints.