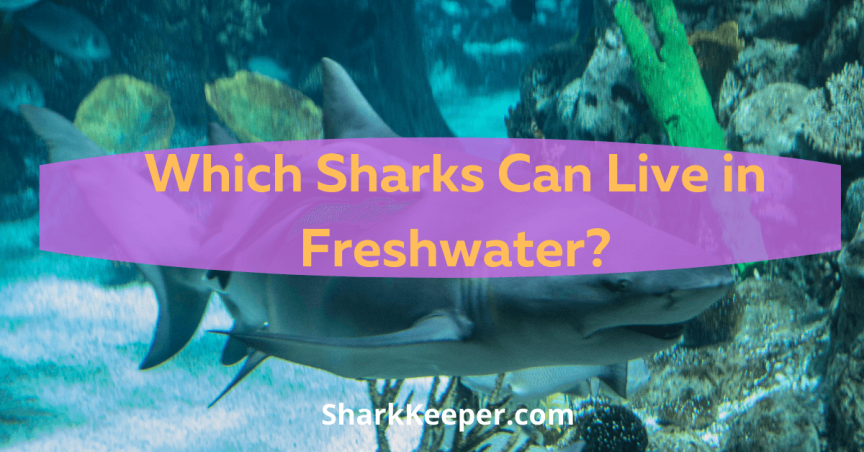 Sharks are marine water creatures that live in oceans and seas. With this, you may wonder if you can ever find sharks in freshwater. Or, if it is possible, which sharks can live in freshwater? When we talk about freshwater, we mean water that is not salty. Hence, Rivers, Streams, and Lakes are all freshwaters. Ocean water is salty.

Since most saltwater sharks cannot survive in freshwater, how do River sharks adapt?

Let’s find out more about sharks that can live in freshwater.

What are the Features of Freshwater Sharks?

Even though only a few adults have been studied and documented. River sharks would likely reach about 9 ft (3 meters) in length. These sharks also have more oil in their liver that helps them stay afloat than other ocean sharks.

These sharks are larger than most ocean sharks. Freshwater sharks are not as efficient as ocean sharks when hunting. So, they replaced that by becoming more aggressive than others to guarantee they get their prey and feed well.

Species of Sharks that Can Live in Freshwater

Here are examples of River sharks and their special adaptations that help them survive in freshwater.

The speartooth shark is a very rare river shark with the scientific name “Glyphis glyphis”. This shark was discovered through a few immature specimens found in mangrove-lined rivers in north Australia and new guinea.

The speartooth shark got its name from the spear-like teeth in their lower jaw.

Features of the Speartooth Shark

Speartooth sharks like to follow changing tides to save energy. When it comes to feeding, these sharks like to prey on small fishes, stingrays, and crustaceans.

They rely mostly on electroreception to hunt their prey. Basically, speartooth sharks are bottom feeders.

These sharks reproduce through viviparity, which means they give live birth.

On the International Union for Conservation of Nature (IUCN) list, speartooth sharks are listed as Endangered (EN) species. The threat comes from bycatch by fishers and habitat loss.

Speartooth could possibly reach about 8.5 ft (2.6m) in length at maturity. Like other freshwater sharks, spear tooth sharks also have a flat, broad head and tiny eyes.

They live in dark, murky waters and a sizeable dorsal fin that helps them swim slowly in fast currents.

Ganges sharks have six subspecies, and they stay in rivers and estuaries throughout their lifetime.

You can find these sharks mainly in the Brahmaputra, Mahanadi rivers in Pakistan, Indian, Myanmar, Borneo, Ganges, and Hooghly.

Ganges sharks usually have a brownish-gray color. They would likely grow between 68.5 and 80.3 inches (174 and 204 cm) in length. Like most river sharks, they have a wide snout and broad mouth with small eyes.

Although scientists do not know much about these sharks’ hunting behaviors, they believe the sharks feed on freshwater rays and bony fish.

Their eyes roll upward on their head, making scientists believe they hunt for their prey looking upward. In addition, Ganges sharks use their sight, smell, and electroreception in hunting their prey.

Northern river sharks are also known as New guinea river sharks. These sharks inhabit the rivers of the new guinea and Australia.

The Northern river shark is the most massive of all freshwater sharks.

Despite inhabiting freshwaters just like other river sharks, unlike them, they do not spend all their life in freshwater. Instead, they also live in both estuaries and bays made up of brackish water.

Features of the Northern River Shark

Northern river sharks can grow up to about 8.2 to 9.8 feet (2.5 to 3m) in length. They belong to the family of Carcharhinidae and the species of requiem shark.

This shark species have about 31 to 34 tooth rows in their upper jaws and about 30 to 35 teeth in their lower jaws.

They have white and blue coloration, small eyes, and a flattened head. Also, these sharks possess a great sense of electroreception that helps them when hunting in flowing tidal waters.

More so, it helps them in detecting their prey in muskier water. Especially where their eyesight has little to no use. Northern sharks depend on flowing tides to hunt.

The Northern river shark is viviparous, meaning they give live birth. These sharks are currently listed as Critically Endangered (CE) on the IUCN red list. Human degradation, such as mining, damning, is a significant threat to Northern river sharks.

Borneo river sharks are sometimes referred to as “Mythical sharks” due to how rare they are. Scientists discovered these sharks from a few specimens collected in the 19th century.

They occur in inshore waters around Borneo northwest. IUCN believed these sharks are Endangered (EN) because they have not been seen again since 1937.

Features of the Mythical Shark

Unlike most sharks, their bodies are slim with a long-pointed snout and snit-like nostrils. Borneo sharks have large and circular eyes with nictitating membranes.

One thing that is incredibly unique to Borneo sharks is their upper teeth. This is because it has a single narrow, slightly bent cusp and big serrated edges.

Scientists assume bony fish to be the primary food for these sharks. Like other requiem sharks, Borneo river sharks are also viviparous, i.e., they give live birth.

Borneo river sharks have grayish coloration that darkens when toward the tips of their dorsal fin.

They have a white underbelly that serves for countershading while swimming.

The dermal denticles of these sharks are tiny and overlapping with three horizontal ridges leading to their marginal teeth. Their pectoral fins are sickle-shaped with small, triangular pelvic fins.

Almost all Borneo rivers sharks were discovered in fishery landing sites in Borneo. However, there was one discovery in Zhoushan island in china too.

But after that, there has been no sighting in this location. Therefore, it is safe to restrict the range of the mythical shark to shallow waters in northwest Borneo.

Out of over 500 species of sharks on earth, Bull sharks are among the few sharks that can live in both freshwater and saltwater. Despite bull sharks’ ability to live in freshwater, they are not actual freshwater sharks.

Due to the Bull shark’s ability to live in both freshwater and saltwater, they are said to be diadromous.

Age is a determining factor for bull sharks to live in either freshwater or saltwater.

The adult bull shark moves from saltwater to freshwater to give birth. This is because their pups have a low tolerance for high salinity. As a result, you’re most likely to find juvenile bull sharks in freshwater.

Features of the Bull Shark

Like most sharks, Bull sharks’ females are larger than their males. Their pups can reach about 2.66 ft in length.

Bull sharks are grayish and have a white underbelly for countershading. These sharks do not have an interdorsal ridge.

They are naturally very aggressive. Thus, when it comes to hunting and feeding, bull sharks are an aggressive predator.

They will eat just about anything, be it other sharks, dolphins, or fish. Also, they would attack humans, although humans are not particularly on their menu list. Hence, they attack humans out of curiosity.

You can find bull sharks worldwide in warm coastal waters. As a result, their range goes from Brazil to Morocco to Angola bull sharks.

When it comes to dangers to humans, Bull sharks are among the most dangerous sharks in the universe. Bull sharks are likely to be responsible for the jersey shore shark attacks in 1916 that inspired Peter Benchley’s movie, Jaws.

How Long Can Shark Live in Freshwater?

Some freshwater sharks can spend their entire life in freshwater, while some only live in freshwater at their juvenile stage. Bull sharks, for example, are mostly found in freshwater as juveniles. Once they start to grow into adulthood, they move into saltwater.

So, it depends on the species of sharks that it is. Hence, some would spend their entire lives in it while some would eventually move out.

What Sharks Can Live in Freshwater and Saltwater?

The name of the sharks that can live in both freshwater and saltwater is bull sharks. They can adjust their osmosis to fit their environment.

Shark body contains a lot of salt, so their design matches their environment.

More so, sharks do not have a swim bladder, so they depend on their livers to stay afloat. Saltwater has more buoyancy than freshwater.

Do Sharks Live in Freshwater?

However, history confirms that the first shark to ever show up 450 million years ago lived in freshwater. Freshwater was home to many sharks until the Carboniferous age that descendants of sharks started to dominate saltwater.

By now, we believe you know what sharks to expect when next you are swimming in freshwater and how dangerous each species is.

Note also that river sharks are very rare and there has been no sighting of some species for long.